Historically, tribal land management issues have been focused on state and federal jurisdictional concerns, but it is now shifting toward pipeline companies that should consider the unique relationship the tribes have with the lands surrounding their projects. Tribes are acutely aware of the relationship between the environmental impacts of various types of infrastructure development and the subsequent health impacts on their people. Through their deep understanding of and connection with the land, native communities have managed their environments sustainably for generations. In turn, the flora, fauna and other resources available within their traditional territories have provided them with their livelihoods and have nurtured their communities.

Native American tribes have historically struggled to manage their tribal lands relative to corporate America and the federal government. Energy infrastructure development that impacts native communities and their associated lands are especially controversial. Tribes have endured a long history of their traditional lands being exploited for their resources without tribal input or benefit. As a result, tribes are starting to develop the legal and governmental capacity to assert rights that can make or break a pipeline project. It has become more and more apparent that tribes who want to influence projects within their traditional territories are able to do so.

Pipeline companies are faced with numerous regulatory issues that are a concern to tribal governments as well, such as balancing environmental stewardship with the growing need for building more pipelines in areas important to the tribes. The permitting agencies do not play a role in siting pipeline projects; that is left up to the companies themselves. Once a pipeline company determines the proposed route, then the regulatory process begins. The responsibility for approval of the pipeline route falls on the individual states, but in some cases a state does not have a department in charge of pipeline siting, thus the responsibility falls to the land use authority of local governments along the proposed route.

Pipeline companies that seek to develop their projects within a tribe’s traditional territory without understanding that they are dealing with sovereign governments proceed at a high risk of controversy opposition and failure. The sovereignty of tribes over their own lands and resources is strong enough that proceeding with pipeline development without their support puts any project in jeopardy.

Attempting to successfully develop a pipeline project without significant interference from a tribe and without an effective tribal relations strategy is a potential recipe for disaster. Unfortunately, all too many companies don’t recognize the significance land has with the tribes and the importance of tribal relations. Even the most experienced and responsible companies will undoubtedly find that their strategies that have been effective with other stakeholders are at a minimum weak when dealing with Native American tribes.

Although the concept of tribal-corporate relations has been extensively covered, it is usually viewed from the corporate perspective. In order for the company and project to succeed, they must understand the tribal community’s history and values and develop a trusting relationship with tribal leaders. It is most often presumed that the pipeline company is the initiator of any relationship relative to a pipeline project. The company’s dilemma is when engaging they come across as wanting something from the tribe, and the approach from the tribe is to prevent the company from getting that something. Things are beginning to change, though, because tribes are employing more and more people who have the experience to work effectively with pipeline companies on their projects.

Why are corporate-tribal relations and land management considerations so important when Tribes will tell you that their main issues are with the state and federal governments? Why is it important for pipeline companies to be focused on effective tribal relations versus resting on tribes consulting with the permitting agencies? The answer is that Indian Country is experiencing a huge shift in how they view land management relative to energy infrastructure development and that is empowering tribes.

Many tribes have experienced extensive economic booms from gaming and energy development and with that comes improved governmental structure and qualified personnel to manage oversight of the lands within their traditional territories. There is a growing number of educated and experienced Native leaders and managers operating the tribal governments who take land management very seriously.

The good news is that some pipeline companies developing projects within a tribe’s traditional territory are learning to successfully work with tribes. The challenge they face is to incorporate cultural sensitivity and best management practices in their projects. They are recognizing that they really have no choice but to respect and learn to work effectively with the tribes. Tribes are legitimate governments and they have the power to seriously negatively impact a project. Instead of viewing tribes as a risk to manage, companies should work with tribal governments as they would with any local, state or federal government. Treating tribes as another “stakeholder” and failing to recognize their governmental status will create animosity between the parties. This holds true when building on a reservation but also when there is a project that has impact on their cultural properties off reservation. 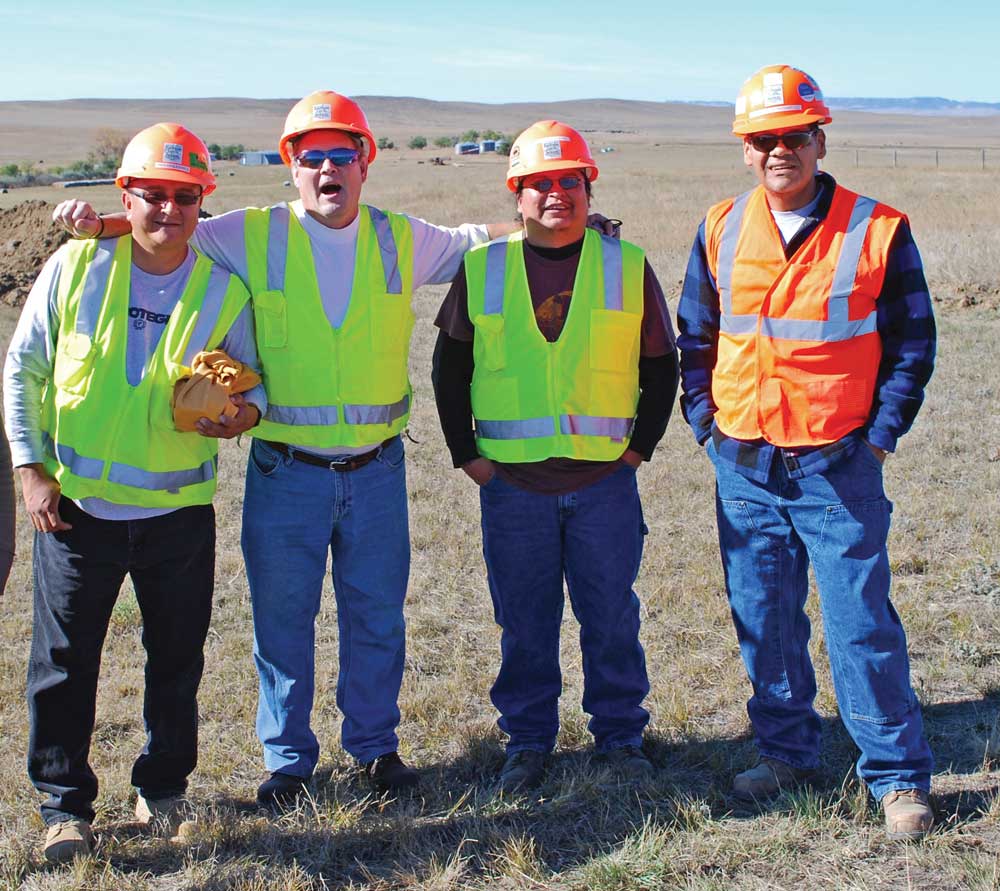 A project engineer provides a bundle (an offering of tobacco and sage) to tribal archaeologists prior to beginning right of way cultural resource surveys.

A tribe has inherent authority on land they have title to but they also have a certain amount of off-reservation authority, through the National Historic Preservation Act and Native American Graves Protection and Repatriation Act. This means that for pipeline projects in Indian Country, those tribes have some jurisdiction that overlaps the jurisdiction of other governmental authorities and landowners. Federal agencies and pipeline companies should take seriously their legal obligations to consult with tribes concerning cultural properties, sacred sites and adverse environmental impacts.

From a tribe’s perspective the more willingness to work with the pipeline companies, the greater the likelihood that the company will respect traditional territory and the lands within in it. Not allowing a tribe to participate in the development of a project is often times viewed by the tribe as disrespecting their sovereignty. Not recognizing their relationship to the land could inevitably cause for them to protest the project. No level of community investment or economic development will compensate for the tribe’s sovereignty being trampled on.

One important way to avoid this situation is land acknowledgement. What is land acknowledgement? A land acknowledgement is “a formal statement that recognizes the unique and enduring relationship that exists between tribes and their traditional territories.” Recognizing the traditional lands of a tribal community allows for an expression of gratitude and appreciation as well as a way to honor and understand the history of that specific tribal nation. The use of a land acknowledgement statement also encourages company personnel to think about what it means to occupy space on native lands. Native American tribe’s connection to the land provides a rich source of knowledge for a better land management approach when their decision-making is considered.

Incorporating the spirit and principles of native people’s appreciation and deep understanding of the landscape and its features has been overlooked or sidelined in the past — to the detriment of pipeline companies. A territorial or land acknowledgement is an act of reconciliation that involves making a statement recognizing the traditional territory of the native people who called the land home before the arrival of settlers, and in many cases still do call it home.

Tribes experience both benefits and adverse effects from infrastructure projects. Through meaningful engagement pipeline companies can often maximize the benefits and minimize the adverse effects on Tribes and Tribal communities. Effective engagement that takes Tribal interests into account early in the project planning can also reduce the likelihood that infrastructure projects encounter unexpected delays that stem from unforeseen disputes and or litigation. Relationships between pipeline companies and tribes have practical advantages for the energy industry. The more informed tribal officials’ understanding of a proposed project, the more effectively they can comment on that project. Whether tribes support or oppose a project, it is imperative that their concerns be considered.