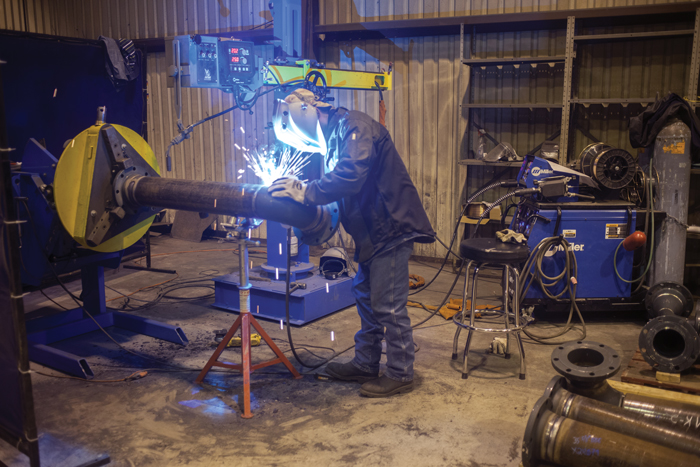 USA Energy Fabrication results show that one PipeWorx machine coupled with a Jimmy Jammer system can do the work of about three hand welders, greatly improving productivity of the shop. Much of that improvement stems from the ability to use a semi-automated RMD process for the root pass.

In just three years, USA Energy Fabrication has grown from a two-man welding operation to a multi-million dollar a year pipe fabrication shop.

Founders Steve Smith and Nathan Bushey launched the Tulsa, Oklahoma-based business because they saw growth potential in the market. The two started out with some structural welding work and a few pipe pieces, working the first several months with one welding machine from Miller Electric Mfg. Co. and a chop saw in the only location available — Smith’s horse barn.

The company focuses on oil and gas products used for production and refining, such as natural gas meter runs, pig launchers/receivers and process piping for custody transfer and petrochemical plants, pharmaceutical plants and refinery operations. USA Energy Fabrication’s services for large exploration and production companies in the oil and gas industry range from hole drilling in pipe walls to structural skids for pipe equipment mounting to pre-fabricated pipe spools for oil and gas movement. Welding operators are able to complete MIG, TIG and Flux-Cored welding, mostly Schedule 40 and Schedule 80 carbon steel pipe and some low tin and Schedule 10 stainless steel.

USA Energy Fabrication’s high level of productivity and consistent, code-quality welds are driving factors in the growing customer demand. Smith and Bushey credit much of the growth — and USA Energy Fabrication’s ability to increase production and quality — to the Miller equipment the company uses, specifically the PipeWorx 400 welding system, which they couple with a Pipe Jammer mechanized welding system. 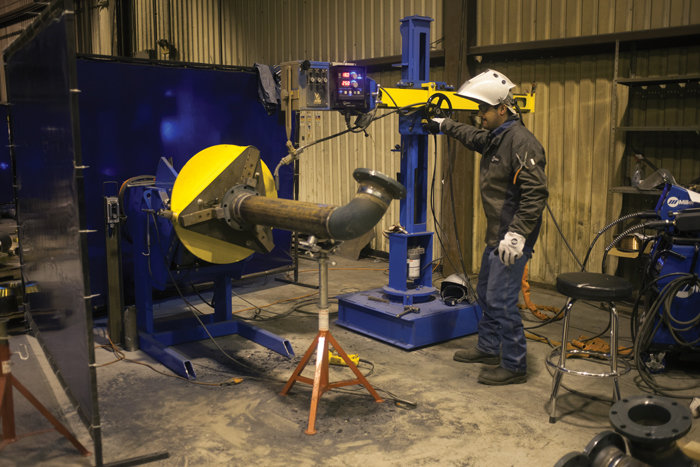 Reducing operator fatigue and optimizing consistency of weld quality by using the PipeWorx combined with a Jimmy Jammer system almost eliminates rejection of the welds produced by USA Energy Fabrication. Weld x-ray passage rate is over 99 percent for the shop.

This combination — an idea suggested to USA Energy Fabrication by Alloy Welding Supply of Sapulpa, Oklahoma — allowed the shop to convert from a manual TIG root pass to the advanced RMD (Regulated Metal Deposition) process. Marrying the Pipe Jammer system with the PipeWorx power source and remote in a semi-automatic RMD process for the root pass greatly increases productivity, improves weld quality and consistency, and reduces weld reject rates to almost zero.

“The aesthetics of the weld is far beyond what our local customers had been receiving,” says Bushey, senior vice president of USA Energy Fabrication. “Once they receive a new job from us, they only want that job from us, because of the way it looks. We wouldn’t be able to take on half the work, if we didn’t have this PipeWorx system.”

A Solution to Meet Production Demand

USA Energy Fabrication purchased its first Pipe Jammer system about two years ago, when Alloy Welding Supply representative Danny Burgess suggested coupling it with the PipeWorx to increase the shop’s productivity in response to greater customer demand. The shop already used Miller equipment, but was new to using the PipeWorx system.

The Pipe Jammer concept (also known in some regions as a Jimmy Jammer) has been around for years, but combining it with the power source and the RMD process for the root pass is what helped provide the productivity and quality gains to USA Energy Fabrication. RMD is a modified short-circuit MIG process that precisely controls metal transfer for uniform droplet deposition, providing a stable arc and easier puddle control. The Pipe Jammer is a positioner and oscillator that controls the gun and the puddle. The welding operator watches the puddle, making any setting adjustments as necessary during the process.

The welding operator has the ability to set parameters at the power source, then use the remote to control settings such as voltage and amperage at the weld joint. The remote also is necessary to start the weld, since the gun trigger is not accessible when the gun is in the gun holder on the Pipe Jammer unit. The power source and remote also offer push-button process changeover.

“We don’t have to bend over, and because the pipe is rolled all the time, it’s a lot easier to weld,” welding operator Gregorio Torres says. “The welds are very easy to make and they look really nice, and the machine makes it easy to do that.”

“The arc is so smooth and consistent every time. A welder’s really proud of his weld, every time he produces one of them. His welds look exactly the same, every time he welds it,” Burgess said of the system. “It’s not a robot. The operator has to put the tip in the gun, the wire, feed the wire. They have to see the quality.” 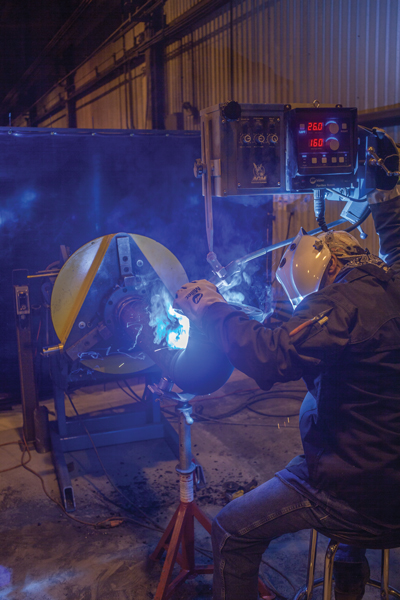 The system is easy to setup and use, offering a nice arc, excellent deposition rate and forgiving RMD process for the root pass. These benefits result in easier and faster training of welding operators, which is key for companies that may struggle to find skilled welders.

One Welder Does the Work of Three

With that first combined system, a single welding operator could complete as much work as three operators manually on other machines, resulting in huge productivity gains that made it much easier for USA Energy Fabrication to keep up with their workload at the time. Bushey and Smith were sold.

“Everybody in today’s world, it can’t happen fast enough,” says Smith, USA Energy Fabrication president. “With the Jimmy Jammer and the PipeWorx working together, those tools have given us the opportunity to produce this pipe a lot quicker.”

The company eventually purchased a second system and recently added a third. The PipeWorx power sources offer the remote capabilities and dual feeder. The operator has full control at the weld joint and can make process changes and voltage, amperage and wire speed adjustments at the remote. The dual feeder provides the time-saving option of running stainless on one side and carbon on the other without changing out the wire, for example. The power source also can save different settings for different welding operators, and coupled with the Pipe Jammer, it allows the welders to weld up to Schedule 120 pipe, with 1/16 flux-cored wire.

“Those three welders themselves can basically do what 10 welders can do,” Bushey says. “The system basically pays itself off in less than four months, which is a pretty good return on investment for any machine.”

The productivity numbers tell the story for USA Energy Fabrication and for Alloy Welding Supply, which has seen the system catch on with other customers in the pipe welding market.

“They can do certain welds in a matter of minutes that it would take other welders hours to do without this system. We did a time study on a 6-inch extra heavy…it was a double extra heavy wall pipe…and it took only 19 minutes to do it on the PipeWorx system with the oscillating welder,” Bushey says. “A hand welder, it can take them two hours to do that.”

The semi-automated RMD root pass process offered by the system not only allows operators to produce high quality welds much faster, it also greatly reduces welding operator fatigue, which impacts quality. The system can hold the gun all day and remove fatigue from the equation, so productivity and weld quality remain consistent.

“The welds look exactly alike at 8 o’clock in the morning, just like they do at 5 o’clock in the evening,” Burgess says. “We have such a good relationship that I can bring customers in here. They’re just floored when they see what his guys do here, as far as production. That’s all they talk about.” 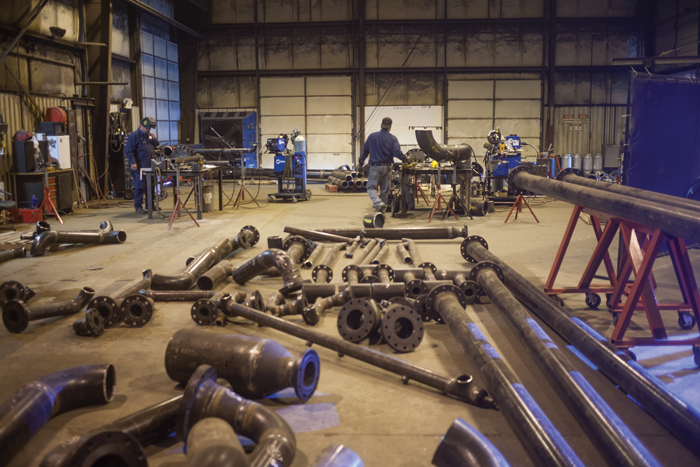 USA Energy Fabrication recently moved into a 22,000-square-foot production facility to meet customer demand. The 3-year-old pipe shop attributes much of its growth to the productivity and quality gains achieved by using the Miller PipeWorx 400 welding system, which the company couples with a Jimmy Jammer semi-automated welding system.

Before implementing the system with the PipeWorx, USA Energy Fabrication typically had x-ray passage rates of 80 percent to the low 90 percent range. Now it’s over 99 percent — so close to 100 percent that the shop has to measure in decimal points.

“I can’t express how much an x-ray failure is so detrimental to a pipe welding shop, and the PipeWorx, with the Jammer system, almost eliminates that variable,” Bushey says. “We experience almost 100 percent passage rate on all the welders that use a PipeWorx system with a Jammer.”

USA Energy Fabrication welding operators that use the system are happy to produce such high quality welds so consistently.
“It’s a very good-looking weld,” welding operator Jesus Torres says. “They always come out the same.”

The optimized arc performance for pipe welding, excellent deposition rate and forgiving RMD process also result in easier and faster training of welding operators, which is key for companies that may struggle to find skilled welders.

“This piece of equipment is very forgiving for a new person that’s being introduced to it. If you want to run Flux-Cored, you push the button that says Flux-Cored. If you want to run MIG, you push the button that says MIG,” Smith says. “If you’ve got a guy that knows how to weld, you can just show him where the controls are and how to control it, and in a couple of days, he’s going to be comfortable with being able to run the machine.”

The more welds that USA Energy Fabrication welding operators can complete in a day, the more business the company can take on. The shop can say yes to more projects while still keeping customers happy with the quality and consistency.

Smith dreams of a bigger, custom-built shop down the road, where USA Energy Fabrication can expand its business even more. He expects Miller equipment will continue to be an important part of that growth.

“It means the world to us, as far as production goes,” Smith says of the PipeWorx system. “I’ve found that the Miller equipment’s been more forgiving for a welder than any of the other brands.”