Reaching momentous milestones within the trenchless construction industry is the result of the outstanding amalgamation of many factors. The machinery, technology, tooling and personnel must first reach state-of-the-art status and then be carefully orchestrated as a cohesive unit to achieve new limits well beyond currently known standards.

In addition to being one of the longest ever, a recently completed horizontal directional drill (HDD) project is the only one like it anywhere in the world. This unique project created a sustainable new delivery outlet for a largely previously untapped energy resource in the Bakken area of North Dakota.

Michels Corp. was contracted by Kinder Morgan to utilize HDD and pipeline support to complete the 13,247-ft Bakken Missouri River Crossing (BMRC) Project under Lake Sakakawea on the Missouri River. Based in Brownsville, Wisconsin, Michels is one of the most accomplished HDD contractors in the industry. In addition to being noteworthy for its awe-striking length of 2.5 miles, the project provides a previously unavailable trenchless option for transporting natural gas without disturbing the lake bottom.

This crossing location also eliminated the need to further investigate the costly alternative of having to divert hundreds of miles around the lake in order to find a more-standard length crossing location. Prior to the BMRC Project, the two-mile-wide Lake Sakakawea and lack of infrastructure separated about 30 percent of Bakken natural gas from processing plants, requiring it to be flared instead of used, according to Kinder Morgan. This resource can now be reliably transported to market having successfully bridged the extensive gap between the two shores with this pipeline.

The journey took the drilling and pipeline crews through some of the wettest late summer and fall conditions in recent memory, giving them a late start. The schedule was also affected by the special attention given to protection of the Dakota butterfly flight season taking place somewhere between June 12 and July 13 and lasting 12 to 19 days. Combined, this would put the project up against a tight window for completing it prior to the bitter cold winter months which could wreak havoc on water-based drilling operations and pipeline testing procedures prior to pullback. 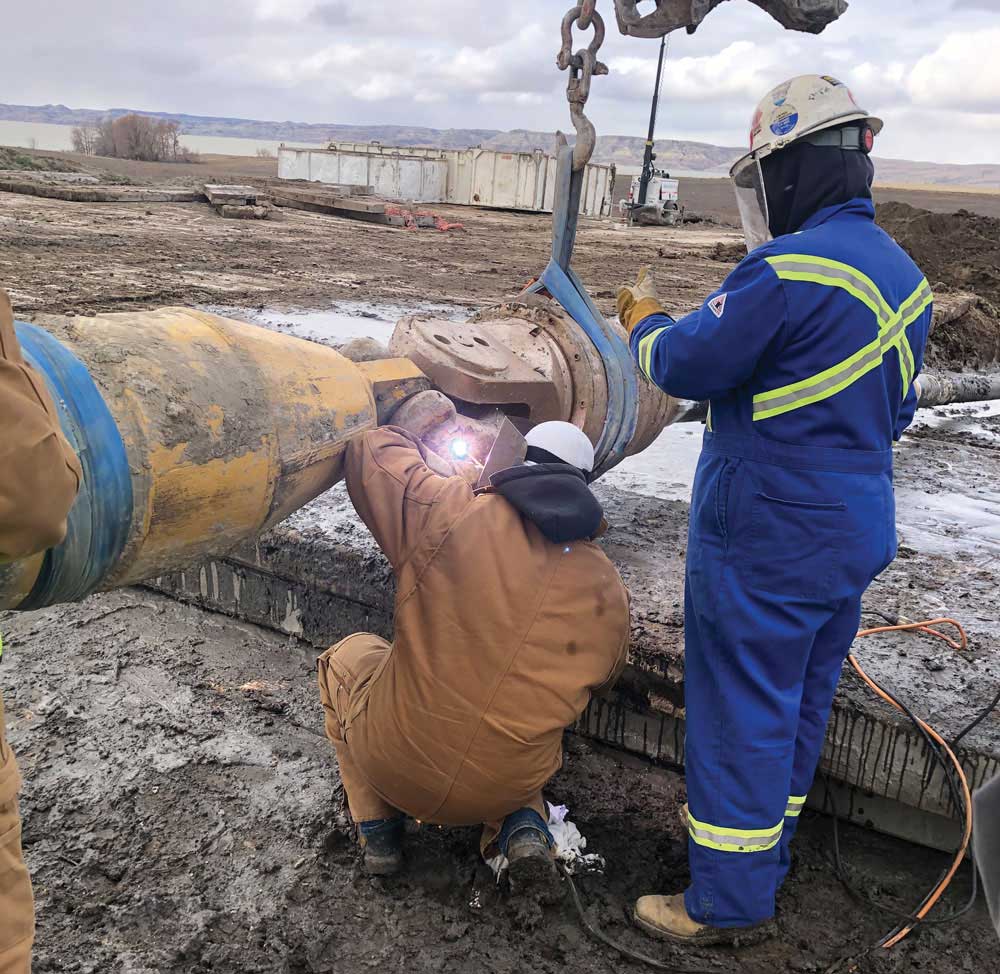 Ultimately, the project successfully culminated in October with the two-day pullback of the massive snake trail of pipeline welded in three strings by Michels pipeline construction crews, traversing the undulating terrain adjacent to the lake. The lengthy pipe was strung out over rolling hills about 1,400 ft away from the exit hole to accommodate oil well pads and a road. The pullback started with an 1,100-ft section and was followed by two sections of about one-mile each.

This historic crossing started several years prior with an extensive planning and permitting process. Kinder Morgan held several meetings with the Army Corps of Engineers regarding HDD procedures specific to protecting the lake from any environmental impacts. Ultimately HDD was chosen as the preferred construction method because the pipeline would be built well below the lake bottom and would present far fewer surface and environmental impacts than traditional open-cut installations.

Michels HDD crews arrived on site in early September and set up custom fabricated drill rigs on each side of the lake to begin the pilot hole intersect project. Michels has been perfecting the pilot hole intersection method for a dozen years, having completed more than 175 to date, and has previously used this method to complete some of the most complicated, long-distance HDD installations that would otherwise not have been attempted.
Crews prepared to drill through compacted clay, sand, rock and coal seams. Guided by gyroscopic tracking and downhole tools, the two pilot holes met almost exactly in the middle.

Temporary water hoses were routed from nearby water wells across rolling terrain up to the drill pads. Although the lake is only 30 to 35 ft deep, the banks at this location rise as a cliff to 280 ft on the north side of the lake and 60 ft on the south side. the approved drill path required the crossing to be completed 265 ft below the bottom of the lake based on a hydraulic fracture analysis. In additional, turbidity curtains were pre-staged and deployed to protect the lake should an inadvertent release of drilling fluid occur. In the end, Michels’ specialized tooling and significant experience with the careful management of downhole drilling fluid pressure and bentonite mixture management resulted in the completion of the project without an unplanned release of drilling fluid.

Completing a project that will serve as a benchmark for future HDD crossings is a source of great pride and opportunity. BMRC will broaden the upper limits of expectations for future crossings that may not have been thought possible in the United States and around the world. Completing milestone projects come with significant risk and challenges that must be strategically handled by experience crews and project leaders in the industry.