According to Mordor Intelligence, “around 50 to 60 percent of the installed gas meter base in the United States are automated reading devices.” In recent years, there have been some large-scale gas advanced metering infrastructure (AMI) projects. One at Southern California Gas installed approximately 5 million systems for its customers during a five-year period beginning in 2012, and another at Con Edison deploying 1.2 million new smart gas meters. In the United Kingdom, a long-planned smart gas meter rollout of up to two million AMI systems by British Gas hit several roadblocks along the way. When asked by the British government why the UK utility had failed to meet its AMI installation deadline, British Gas officials cited “lack of adequate resources such as smart meter installers.”

With this in mind, the Nicor Gas Meter Modernization program currently underway across northern Illinois is remarkable. Here’s why: The utility agreed to install a communications network with radio modules on every meter in its service territory within three years, which is a total of 2.2 million meters. 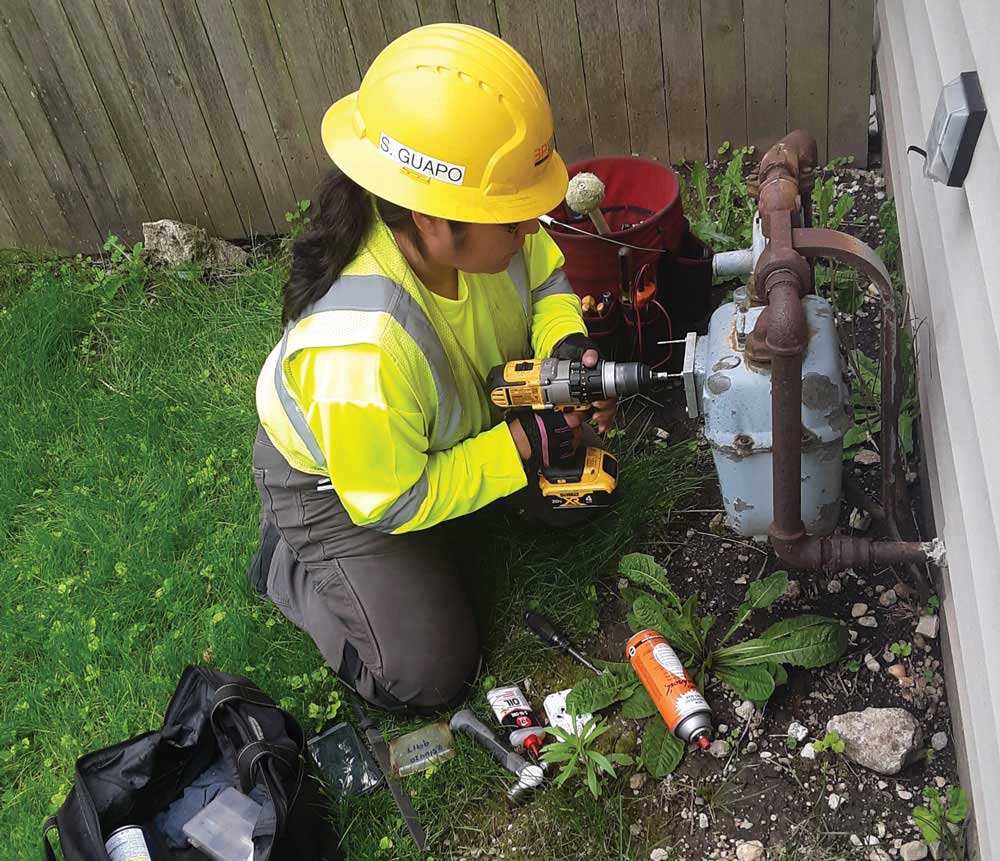 As a part of the Meter Modernization program, Nicor Gas wanted to help create long-term jobs in its service territory, as well as support Nicor Gas’ commitment to business diversity.

Nicor Gas surveyed its customers and knew they wanted timely data about gas use, which helped the utility build a case for creating and funding the program. One of the motivating factors for the program was the desire to eliminate the existing business practice of bimonthly estimated gas meter readings, which didn’t provide timely information to consumers about their energy usage. Nicor Gas presented an expedited schedule for funding the project as part of the overall value proposition. To eliminate estimated readings, the company needed to either double the meter-reading workforce or automate the process. With the business case approved in 2017, Nicor Gas chose to automate the process via a Sensus FlexNet communication network and radio modules placed on customer meters.

Scaling Up a Workforce of Installers

Nicor Gas knew from the planning stages it had to find contractors capable of installing the radio modules, since the utility didn’t have enough employees to complete a project of this scale within three years. As a part of the Meter Modernization program, Nicor Gas wanted to help create long-term jobs in its service territory, as well as support Nicor Gas’ commitment to business diversity. Project managers located and vetted vendors, one of which was 3P Utility Services, a MasTec Company, whom Nicor Gas had partnered with on other infrastructure projects.

3P Utility Services, Nicor Gas, the Laborers’ International Union of North America (LIUNA) Chicago Laborers’ District Council and the Chicago Federation of Labor teamed up on the Meter Modernization program to identify, hire and train workers who could become meter technicians for 3P Utility Services’ portion of the project. To recruit qualified workers, hiring managers collaborated with LIUNA and the Federation of Labor to ensure that each worker hired would not only make a livable wage, but also obtain a union card from LIUNA. After the project ends, workers can continue to work for 3P Utility or another construction project in Chicago and beyond.

The Meter Modernization program is creating jobs and potentially retaining workers for the utility industry. For example, 3P Utility Services hired 194 workers, all of which have become LIUNA members. Most, if not all of the workers had no construction or utility experience before the project. Through training, they’ve learned to work safely, accurately and efficiently to keep the project on schedule.

Fundamentally, the work requires an installer to have a handheld device, Bluetooth device and hand tools to install a radio module on one of several types and sizes of meters. Early on, Nicor Gas and 3P Utility Services encountered some Elster American Meters from the 1940s that were incompatible for fitting a radio module. This led Nicor Gas and 3P Utility Services to not only determine the best process for removing, rebuilding and reinstalling the meters, but also scheduling the work in a way that kept the overall project on track. In other instances, the team found it necessary to move meters instead of simply retrofitting the radio module. In those cases, some of the newly minted LIUNA workers have been trained to undertake more complex construction tasks. After an installer puts in place a module, Nicor Gas receives a usage reading from the meter every four hours compared to bimonthly reads obtained by meter readers.

Through attrition, retirement and promotion, the job of meter reader will eventually be phased out, along with some of the costs linked with the job (e.g., reduced number of reprocessed bills due to manual meter reading errors, time to field customer calls), which helps Nicor Gas offset some of the cost of implementing the technology. The role of utility specialist will supplant the meter reader’s job and lead to higher value jobs like compliance work and gas surveys.

From Nicor Gas’ benchmarking with other utilities, its project team has found most energy companies aren’t as aggressive with carrying out meter modernization plans. For example, a utility in Texas noted that it had planned to replace or upgrade 10,000 meters over the course of five years. That’s a number Nicor Gas and 3P Utility Services can nearly complete in one day.

To expedite a meter modernization program, it’s critical to build a compelling, well-researched business case that highlights a measurable customer benefit. Next, a partnership with qualified, external providers can build out the workforce to supercharge the pace of work, yet maintain safety. Utilities shouldn’t overlook partnerships beyond utility vendors, either. In Nicor Gas’ case, the unions were not only a source of ideas, but also a powerful partner for retaining a corps of installers once hired. That’s not to be overlooked because attrition among installers can cause a project to slow to a crawl.