The United States ranks as the top destination for oil and gas industry investment, despite growing uncertainty in the global market.

The U.S. oil and gas industry’s mix of measures balance cost control with long-term efficiency gains. Designed to tackle rising costs even before the oil price hit record lows, a new report by DNV GL shows the industry’s actions contribute to the country’s favored position as an investment destination.

The low level of confidence in North America is also reflected in capital expenditure intentions; three months ago a quarter (25 percent) of respondents were planning to decrease capital expenditure, and this has now risen to more than half (51 percent). Nearly half (49 percent) of respondents expect headcount to decrease in their businesses compared to 11 percent in 2014.

The survey shows that cost management will be the top priority for nearly a quarter (24 percent) of respondents in 2015, but this is the lowest response for any region; the global average is 31 percent.

“When the U.S. is now cited as the most favorable investment destination by 28 percent of respondents globally, followed by China and Norway, it indicates confidence in the mix of cost management measures being taken in the U.S.,” said Peter Bjerager, director of the Americas division for DNV GL – Oil and Gas. “We asked senior oil and gas professionals what measures they would prioritize to impose stricter cost control and tougher decisions on [capital expenditure] was preferred by more than half of respondents. Other preferred measures included improving workflow processes, increasing pressure on the supply chain to reduce costs and reducing exposure to costlier, riskier projects. Cuts in the workforce come in fifth place by nearly a quarter of respondents, closely followed by more standardization of tools and processes.”

Bjerager adds that, along with continued investments in research and development, the above measures balance short-term cost control with longer term efficiency gains.

DNV GL’s report, “A Balancing Act: The Outlook for the Oil and Gas Industry in 2015,” provides a timely assessment of industry confidence and priorities for the year ahead and is based on a global survey of more than 360 senior industry professionals and executives carried out during the week starting Jan. 19. The report also includes 18 in-depth interviews with a range of experts, business leaders and analysts. The research has been compared with a previous survey carried out from October to November 2014 to monitor shifting sentiment during a period of falling barrel prices as well as with DNV GL’s 2014 industry outlook report. 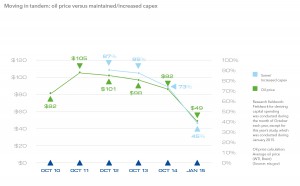 Other key findings include:

Download a complimentary copy of the report at dnvgl.com/balancingact.