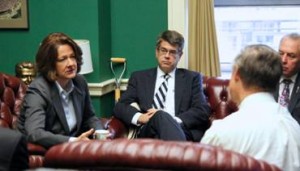 Terry and Upton believe their initiatives — Terry’s Northern Route Approval Act and Upton’s North American Energy Infrastructure Act — are commonsense solutions that seek to strengthen U.S. ties with Canada by bringing certainty to infrastructure projects that will contribute to energy security, economic growth, and job creation on both sides of the border.

“We had a productive meeting with Premier Redford today about ways we can safely and responsibly maximize North America’s energy abundance,” Upton said. “Beyond just the Keystone XL pipeline, we are going to need to build many more pipelines, transmission lines, and private sector infrastructure projects as part of the architecture of abundance to keep up with the remarkable pace of U.S. and Canadian energy production. We are moving forward with solutions to accelerate these job-creating projects, which could help make North American energy independence a reality.”

Terry said he appreciated that Redford took the time to meet with him about the Keystone XL pipeline.

“It is clear that we all share the belief that this project is a benefit to those on both sides of the border and it is critical that it is built quickly,” Terry said. “She [Redford] acknowledged the work of the House and I reaffirmed our commitment to continue to look at all avenues to build the Keystone XL pipeline that will create jobs on both sides of the border, make North America energy secure, and strengthen our trade relationship with America’s number one trading partner.”

Redford stressed the importance of Canada and the United States working together “to maximize the economic and security benefits of growing North American energy production while achieving leadership in environmentally responsible development.”