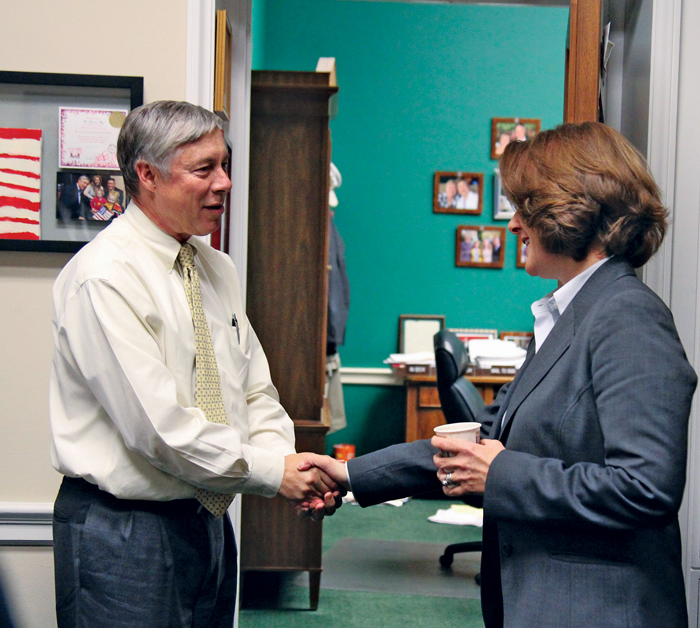 Terry and Upton believe their initiatives — Terry’s Northern Route Approval Act and Upton’s North American Energy Infrastructure Act — are common sense solutions that seek to strengthen U.S. ties with Canada by bringing certainty to infrastructure projects that will contribute to energy security, economic growth, and job creation on both sides of the border.

“We had a productive meeting with Premier Redford today about ways we can safely and responsibly maximize North America’s energy abundance,” Upton said. “Beyond just the Keystone XL pipeline, we are going to need to build many more pipelines, transmission lines, and private sector infrastructure projects as part of the architecture of abundance to keep up with the remarkable pace of U.S. and Canadian energy production. We are moving forward with solutions to accelerate these job-creating projects, which could help make North American energy independence a reality.”

Terry said he appreciated that Redford took the time to meet with him about the Keystone XL pipeline.

“It is clear that we all share the belief that this project is a benefit to those on both sides of the border and it is critical that it is built quickly,” Terry said. “She [Redford] acknowledged the work of the House and I reaffirmed our commitment to continue to look at all avenues to build the Keystone XL pipeline that will create jobs on both sides of the border, make North America energy secure, and strengthen our trade relationship with America’s number one trading partner.”

Redford stressed the importance of Canada and the United States working together “to maximize the economic and security benefits of growing North American energy production while achieving leadership in environmentally responsible development.”

The meeting between the four leaders came on the heels of a new report authored by IHS CERA, which highlights the expansion of Canadian oil sands production in recent years and underscores the critical role of this fuel source in the pursuit of North American energy independence.
Innovation and new technologies have increased the efficiency of Alberta’s oil sands development in recent years, leading to a massive growth in output and an increase in U.S. Canadian crude imports.

“Over the past decade the Canadian oil sands have moved from the fringe to become a key pillar of global oil supply,” said IHS associate director Kevin Birn, “This growth has made oil sands the single largest source of U.S. oil imports and also a key source of global supply growth that could account for 16 percent of all new oil production by 2030. Today, the output of just Canadian oil sands, excluding all other Canadian oil production, is greater than the output of five out of the 12 members of OPEC.”

As oil sands developers have increased their efficiency they have also made progress to decrease the environmental impacts of production. The IHS report found that emissions from the oil sands “are on par with other sources of U.S. crude, including crudes from Venezuela, Nigeria, Iraq and heavy oil production in the [United States].”

The Athabasca oil sands of Northern Alberta are a massive word-class resource and home to the third-largest oil reserves in the world. The advancement in extraction technologies essentially means a new Saudi Arabia has been discovered and placed on America’s northern doorstep.

Canada’s oil sands expansion coupled with U.S. increases in shale production have put the goal of North American energy independence in reach.
To fully realize North America’s energy potential, the Energy and Commerce Committee members say that the United States must build what it calls the “Architecture of Abundance” to keep pace with the innovation and development. The Keystone XL pipeline and other cross-border energy infrastructure projects are needed to transport Canadian energy supplies to U.S. markets and vice-versa.

“These accomplishments can only come about if the United States maintains a well working energy system where markets are allowed to work and where we are allowed to trade with neighboring countries without artificial impediments,” said Mary Hutzler, a senior fellow at the Institute for Energy Research, who recently testified before the committee. “With Canada’s oil reserves at over 170 billion barrels, Canada can help the United States decrease its reliance on Persian Gulf oil, but it must be allowed to trade energy freely and transport it in a safe and reliable manner.”