... Digging Trenches and Beyond

Digging Trenches and Beyond 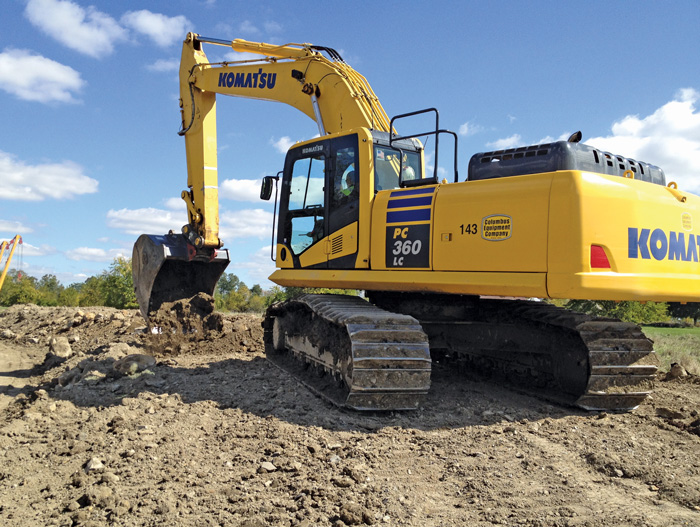 Head to the nearest gas and oil pipeline project and one of the workhorses dotting the landscape will certainly be a hydraulic excavator.

These behemoth machines help with many tasks but many know and use them for their superior trench-digging abilities.

“Well if you’re on a cross-country pipeline, it basically boils down to about one; just open the ditch,” says George Lumpkins, manager of product development at Kobelco.

This, he says, is due in part to the fact that pipeliners generally are paid by the foot or number of joints of pipe laid in a day.

“If you’re talking about a cross country pipeliner, the machines are too valuable and getting that ground open is too valuable so they’ll use side booms, which are the cranes on the side of bulldozers to lower the pipe and not waste time with the excavators,” he adds.

Phillippe Bisson, brand marketing manager for CASE Construction Equipment, agrees that excavators mainly handle digging trenches. Though he adds that the machines are also a “critical part of the supply chain” used to lift materials off trucks at the jobsites and, along with sideboom tractors, help lift pipe into a trench.

“The hydraulic capabilities of an excavator are invaluable for running attachments such as hammers,” Bisson added. “Large deposits of rock are often found during excavation, and these deposits must be removed with hammers and breakers outfitted on excavators.”

Stroll on over to your friendly neighborhood pipe installation site and you’ll generally find the machines chugging along are in the 35- to 49-metric ton operating size range. 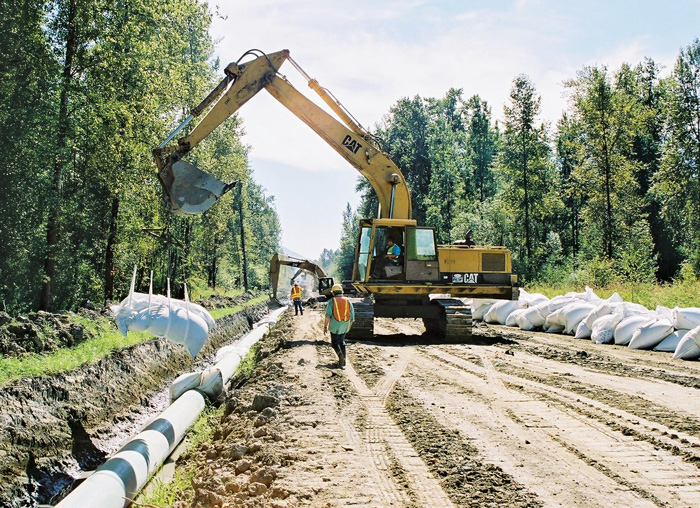 Perrysburg, Ohio based Welded Construction uses hydraulic excavators for several tasks when working on a pipeline project. On a typical-sized job, the company will have about 20 excavators. The bulk of those are the Cat 336s, with Cat 349s, 329s and 320s supplementing where needed.

For Perrysburg, Ohio-based Welded Construction, the model of choice is the Cat 336, says Steve Weaver, manager of equipment and transportation, referring to the excavator as the “do-it-all.”

Don Thorn, president of Welded, says that for short-term work they will generally rent with the option to convert to a lease or purchase.

“During an ‘up cycle’ we tend to a lease for baseline work, for a 24-month period as an example, with the option to purchase and fill the extra needs with short-term rentals,” Thorn says.

If Welded purchases a piece of equipment, the company will hold on to it for six to seven years or longer if the machine can be configured to handle lighter duty work.

Size Matters
For Lumpkins, who has been around excavators since the mid-1970s, even 10 to 15 years ago the ideal machine was a 26-metric ton model.

“Today it’s grown because of the size of the pipe and the size of the buckets you can hang on them,” he says. “This is the same whether it’s Louisiana, east Texas, the area up in the Dakotas, there’s a lot of pipeline work going on in the Pennsylvania and Ohio area. All of this has grown to the bigger machines.”

Unlike other contractors, pipeliners are more likely to operate an excavator in difficult terrain, in remote locations and with time constraints that push the machines to the max.

These conditions, says Kurt Moncini, product manager — excavators, for Komatsu America Corp, factor heavily into what a pipeliner looks for in an excavator. 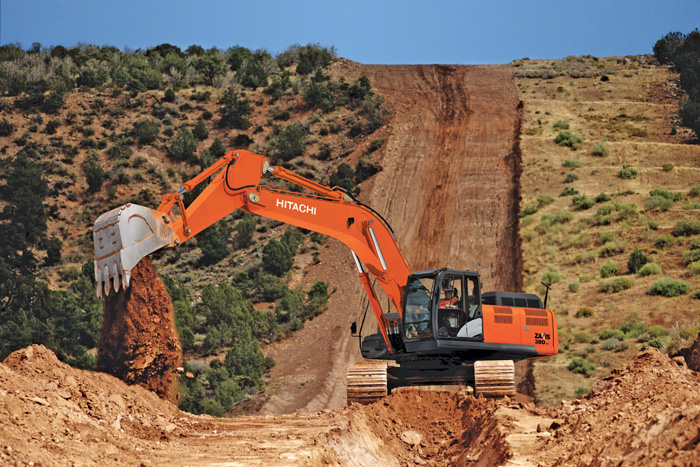 According to Michael Boyle, product consultants manager for John Deere Construction & Forestry and Hitachi, pipeliners gravitate toward excavators that range from 270 to 400 hp, with a digging depth of 24 ft or more. Contractors are looking for machines that provide good reach for trenching without movement, lifting capabilities for heavy pipe, the ability to hold pipe with less drift, hydraulic speed for quick cycles and the ease of moving and transporting the machines.

“This is not to say that these excavators are the only machines used in oil and gas pipeline applications,” Bisson adds. “Smaller excavators are regularly used to help unload trucks and operate attachments.”

Keeping it Going
With the machine picked out and job duties assigned, how can a pipeliner keep the machine running in top shape? The answer is simple according to Lindley Imeson, vice president product support for PipeLine Machinery International, a global Cat dealer for the pipeline industry: Perform the scheduled maintenance per the original equipment manufacturer.

“According to our pipeliners, the summer is not near as harsh as the winter workload. With that being said, the environment of the jobsite is a major factor whatever it is,” Imeson says. “An example is the radiator should be protected in freezing temperatures as well as dusty desert conditions. Over-cooling and over-heating are an excavator’s worst nightmare.”

Welded Construction crew members complete a thorough walk-around of its equipment before starting it each day and the crews use the company’s maintenance inspection booklets, Weaver says. In the winter, Weaver makes it a point to have the crews check the tracks and undercarriage on the excavators because once debris freezes to those areas, it just keeps accumulating and is a nightmare to remove. 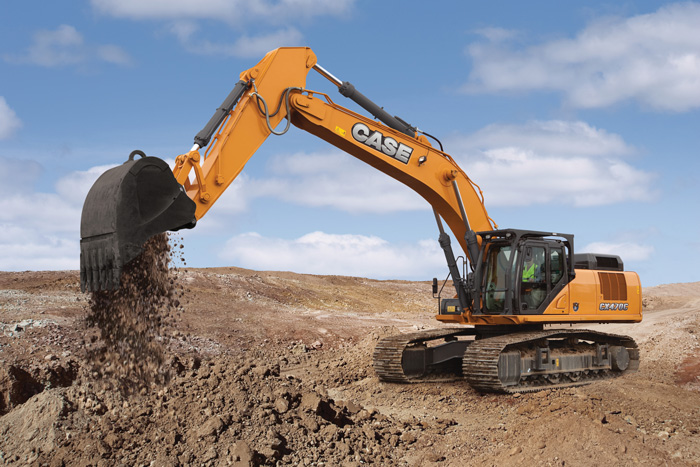 Welded pays particularly close attention to the final drive assembly because, as Weaver puts it, these components have changed in recent years and they seem to be more subject to leaking. He says that those assemblies hold about 2 gallons of oil, which is not much, but when it runs out and someone runs the machine, a damaged final drive can cost up to $30,000 to replace.

“With Tier 4 we are really pushing anti-idling,” Weaver says. “If you have extended periods of down time turn the machine off.”

He estimates that extreme cold weather and extended periods of idling causes up to 80 percent of the jobsite breakdowns the company sees during winter. In the winter when idling is a norm, Weaver says the company adjusts the preventive maintenance schedule.

If the contractor is working on a heavier “extreme” duty cycle, Lumpkins recommends contacting the manufacturer to adjust the machines’ maintenance schedule.

“As with your own personal health, prevention is often the best medicine. Daily or weekly checks can identify problems before they occur,” says Brad Stemper, solutions marketing manager for CASE Construction Equipment. “A good suggestion is to create a habit of pre- and post-operation inspections of the equipment. This allows them to recognize issues that occurred since the last operation or during recent operation.” 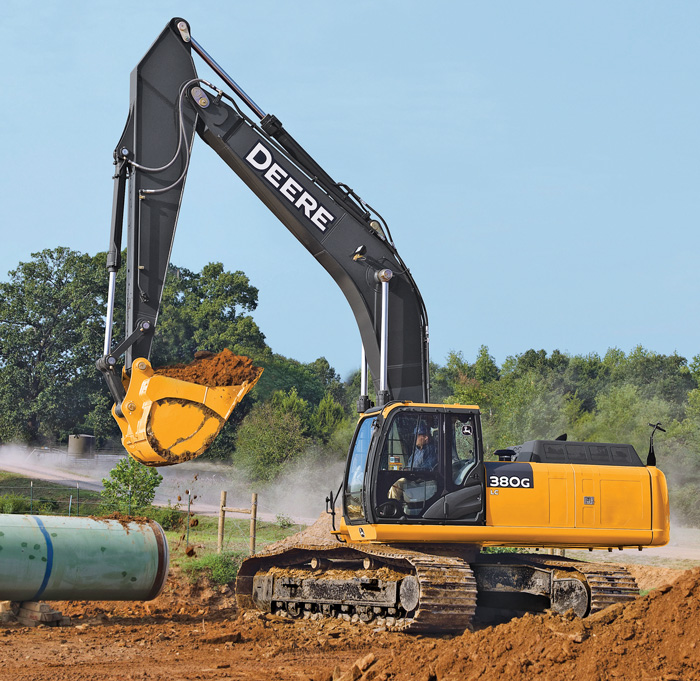 Hydraulic excavators are one of the more versatile pieces of equipment available to pipeliners and are used for a variety of tasks from the staging yard to the pipeline right of way.

“The role of telematics here should also be noted,” Stemper says. “Telematics is a great resource to pipeline contractors in that it helps better keep track of machine hours and maintenance intervals, as well as provides equipment health monitoring capabilities that alert operators and fleet managers to any unusual changes to temperature, pressures or other operating characteristics out of the range of acceptable parameters.”

Speaking to the fuel cleanliness, Lumpkins says that today’s machines have fuel injection pressures at about 30,000 psi with some possibly going higher. This means that unlike in the recent past, fuel cleanliness is paramount.

“These new engines, with Tire 4 interim and now Tier 4 final, absolutely cannot take dirt or water in the fuel,” he says. “Keeping that fuel clean and filtering it before you put it in the machines has never been as important as it is today.”

At the end of a job, Welded sends its lead mechanic to evaluate the machines. The mechanic takes stock of what needs replacing before the next job, how long the repair will take as well as what needs to be monitored. This, Weaver says, ensures that the machines are ready for the next project.

Safety Scenarios
Having a shiny new or slightly used excavator on the jobsite is great but if the contractor does not adhere to certain safety protocols, the machine is of no use to them without an operator at the helm.

“The operator should have a good review of the machine OEM manual and jobsite safety practices,” Imeson says. “They should also have an awareness of the site itself.”

The latter suggestion is foremost on all of the manufacturers’ safety suggestions and made easier with the addition of cameras, which Lumpkins says, is almost a requirement on the new Tier 4 machines.

“These Tier 4 engines, with their big converters, we’ve had to raise the back of the machines to get all of that stuff underneath the hood. You can’t see backward like you used to.”

For Jim Hurley, director of environmental, health and safety for Welded Construction, the No. 1 safety rule is that the operator needs to see the workers and other equipment on the ground. Improved mirrors and a variety of sensors and back-up cameras make this possible.

“You can’t buy a car today without a backup sensor or a camera so why should a piece of equipment be any different?” Hurley says. “The sky is the limit. There are just so many different options you can get on them to facilitate visibility.”

Before starting for the day, Welded conducts a job safety analysis to review the work being done that day, hazards in the field, special equipment needed on the site, permits required as well as the aforementioned equipment survey.

Bisson says, “While most may first think of productivity and ease of operation, visibility is a key contributor to safety on the site.” Visibility from the cab should be looked at when looking for an excavator.

Another key safety factor that Hurley stressed is that companies want to get the most from their machines, but sometimes they go too far.

“I think people can get too carried away with an excavator and ask it to do too much,” he says. “Everyone wants to use their equipment to the max of its ability, which companies should do for optimal utilization and efficiency. However, operators, supervisors and affected employees really need to be careful and fully understand the capabilities and limits of not only the equipment but of the operator and environmental conditions. Operations outside of these parameters can and will lead to consequences that are clearly unacceptable.”