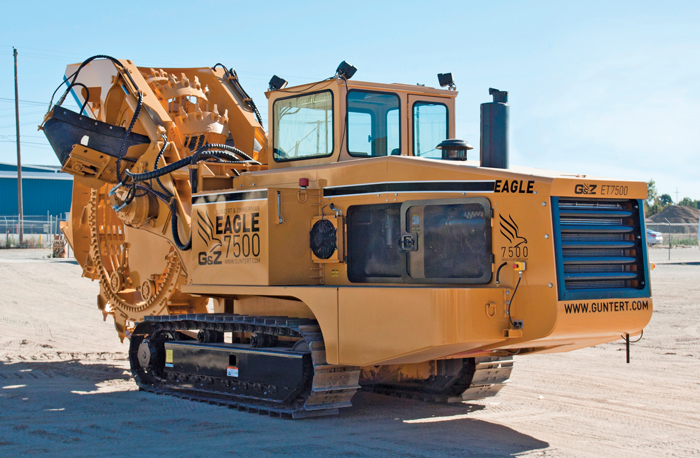 Trenchers and Equipment Inc. (TEI) has released a new entry in its stable of rugged wheel trenchers, the Eagle 7500. The company released the first Eagle Wheel Trencher in 1988, the model 4500. Now, nine models are available for underground construction applications such as pipeline construction.
The Eagle 7500 Wheel Trencher boasts a Cat Tier 3 diesel engine that packs 250 hp and features electronically controlled hydraulic drives, GPS compatibility, 7-ft digging depth, 24- to 36-in. cutting widths and weighing in at 56,000 lbs.

“Wheel trenchers provide the fastest method of open cut excavation,” said Michael Ellingson, president of Trenchers and Equipment. “One Eagle Wheel Trencher can replace anywhere from four to 10 backhoes. Trenchers also leave behind a perfect trench with a fine spoil that can be discharged to either side of the machine or loaded directly onto a truck.”

TEI has been involved with the design and manufacture of wheel trenchers for more 53 years and has  machines working on jobsites around the world. Eagle Wheel Trenchers are designed and built at the company’s facilities in Ripon, Calif.