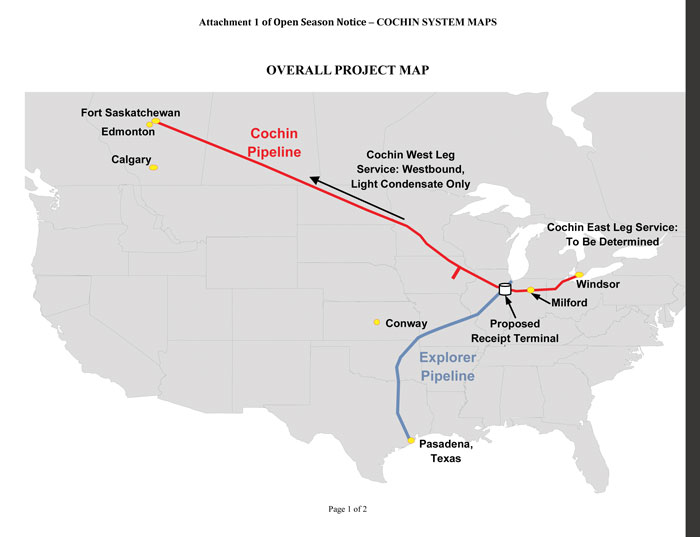 Kinder Morgan plans to reverse flow on the Cochin Pipeline to ship light condensate from East to serve oil producers in the Canadian oil sands.

What was old will soon be new again. Kinder Morgan Energy Partners has tapped Velocity Midstream Partners to help revitalize a 1,900-mile, 12-in. diameter pipeline from Fort Saskatchewan (near Edmonton), Alberta, to Windsor, Ontario, with access to markets in Sarnia, Ontario.

The Cochin Pipeline, placed in service in 1978, travels through the U.S. Midwest and was originally used to ship ethylene to the Sarnia area. Now, Kinder Morgan wants to convert the pipeline to ship light condensate from the East to serve Canadian oil producers in the West, accessing products from the Marcellus and Utica shale plays.

Kinder Morgan acquired an initial interest in the Cochin Pipeline in 2000 and then increased that position over the years until the company finally acquired the remaining interest from BP in 2007 and became the pipeline’s sole owner and operator.

The Cochin system stopped shipping ethylene several years ago, and the pipeline was then used to ship propane and ethane until 2007, when integrity issues forced a reduction in pressure rating below 1,000 psi, according to Karen Kabin, director of business development for products pipelines at Kinder Morgan. After assessing the pipeline, Kinder Morgan determined the majority of the problems were in the United States and began a remediation effort. In 2012, the U.S. Department of Transportation Pipeline and Hazardous Materials Safety Administration (PHMSA) approved an increase in pressure on the line, allowing the company to return to shipping ethane and propane to the Ontario market.

However, because of the increased production of natural gas liquids (NGL) and propane from the shale plays in the United States, Kabin says, Canadian propane is no longer competitive and volume on the Cochin Pipeline has decreased.

“It’s not hard to see that propane is not sustainable for a 1,900-mile pipeline that Cochin is,” Kabin says. “That’s why we decided to repurpose the line. We looked at shipping Bakken crude east, but an open season showed there was not enough interest. We tried an NGL open season from Marcellus to Sarnia, but that also was not successful. The project we found demand for after an open season closed in May 2012 was a condensate reversal.”

Condensate products are in high demand in western Canada for use in oil sands production as diluent used in shipping. The bitumen found in Alberta is too thick to ship without dilution. Market forecasts indicated a huge increase in condensate imports in Canada as oil sands production increases.

“The only pipeline in the ground today to service that demand is the Southern Lights pipeline owned by Enbridge, and that’s not sufficient to meet demand,” Kabin says. “The timing is perfect for Cochin to reverse flow to meet incremental demand.”

Kinder Morgan proposes shipping 95,000 bpd of light condensate on the pipeline. The project also includes construction of a 1 million barrel receipt terminal and a connection from the Explorer Pipeline (a third-party system), which allows shippers to source product from the Eagle Ford shale, as well. Kinder Morgan received more than 100,000 bpd of binding shipper commitments for a minimum 10-year term. The company expects the system to be in service by July 2014.

Kinder Morgan also expects to further expand the system. In the West, the company is evaluating an increase in capacity between Maxbass, N.D., and Fort Saskatchewan to provide opportunity to gather Bakken-sourced condensate. This would also include an increase in pressure from 1,000 to 1,440 psi. In the East, expansion would be to build upon existing infrastructure to better access the Marcellus and Utica shale plays.

The challenge of the project, Kabin says, is finding the demand and attaining shipper commitments to ensure the project is economically viable. On the engineering side, it’s primarily a matter of pulling check valves and reversing pumps to switch the flow from eastbound to westbound.

Velocity to Expand East
Kinder Morgan has partnered with Velocity Midstream to expand the Cochin Pipeline system in the East because of Velocity’s reputation in building out infrastructure in the Eagle Ford shale.

Velocity conceived and built the Gardendale Hub, including storage, truck and rail loading and three pipeline interconnects, near Gardendale, Texas. Over the course of 14 months, the company built out its entire Velocity Eagle Ford system, including more than 120 miles of condensate pipeline with 150,000 bpd of capacity, 185,000 barrels of condensate storage, as well as truck and rail loading facilities. Velocity has more than 400,000 acres dedicated to the system by Shell, Chesapeake, SM Energy, Statoil and Rosetta.

“We were familiar with their work and liked what they had done,” Kabin says. “Their projected timeline on the work in Ohio was very attractive. It’s a 50/50 partnership, where they will do the construction and we will do operations.”

Velocity’s portion of the Cochin project includes the construction of a condensate gathering pipeline to access the Utica shale, a central terminal in central Harrison County, Ohio, truck unloading facilities in Carroll, Harrison, Guernsey and Noble counties, Ohio, future facilities in Mahoning and Columbiana counties, Ohio, and a C5+ hydrocarbon gathering system that connects all economically accessible fractionation facilities in the Utica and Marcellus. Subject to receipt of sufficient commitments and regulatory approval, Velocity expects to put the system in service in the summer of 2014.

Also subject to shipping commitments and regulatory approval, Kinder Morgan and Velocity plan to build a 12-in. diameter pipeline from southeastern Ohio to interconnect with the Cochin Pipeline with a planned in-service date in the first half of 2015.

While expanding the Marcellus-Utica infrastructure is not required for the Cochin reversal, Kabin says, the expansion will provide Cochin shippers with an additional supply point and Marcellus-Utica producers with a cost-effective solution for transporting condensate out of the region.

“The production out of the Utica and Marcellus shale needs to find a place to go,” she says. “Western Canada is a good market for products and offers a more attractive price for shippers. We’re reusing 300 miles of the Cochin Pipeline, and we’ll construct approximately 200 miles of new pipeline through Ohio to connect our terminal and provide access to market.”

The original reversal project is estimated to be a $260 million investment in the project, although Kabin would not comment on the expected final cost of the expansions.