TransCanada Corp. announced March 1 the Federal Energy Regulatory Commission (FERC) has approved the full in-service of its Mountaineer XPress (MXP) project. The approval allows the company to increase the flow of gas on MXP and begin operating its Gulf XPress (GXP) project. The projects are a vital link between Appalachian natural gas supplies and growing markets in the United States and beyond.

“Mountaineer XPress and Gulf XPress are extremely important to TransCanada as they provide much-needed takeaway capacity for our customers, while also growing our extensive footprint in the Appalachian Basin,” said TransCanada president and CEO Russ Girling. “Both projects will also deliver attractive long-term returns and stable cash flow for our shareholders.”

Designed to deliver clean, affordable, domestically produced natural gas, MXP is comprised of 170 miles of 36-in. diameter pipeline, three new compressor stations, and modifications to three existing compressor stations — representing an investment of approximately $3.2 billion (USD). The pipeline is capable of transporting 2.7 billion cubic feet per day (Bcf/d) of natural gas to the TCO Pool and Leach markets on the Columbia Gas Transmission System. MXP is underpinned by long-term contracts with customers.

Partial in-service of the approximately $600 million GXP project includes placing into service four new compressor stations located in Kentucky, Tennessee and Mississippi. Together, these facilities will provide additional capacity of 530,000 million cubic feet per day (MMcf/d) of natural gas on the Columbia Gulf Transmission System, which equates to approximately 60 percent of the project’s total capacity. GXP is also underpinned by long-term contracts with customers and is expected to be placed into full service in the coming weeks.

Since 2015, representatives of MXP and GXP have worked closely with federal regulators, landowners and numerous state and local officials to ensure they were a part of the process from construction to completion. The projects created significant job opportunities and will generate millions of dollars in taxes and other economic benefits for the counties they cross into the future. 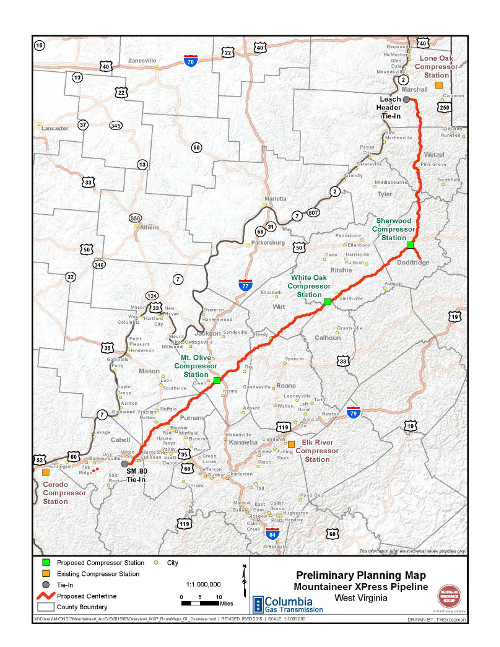