... TransCanada Flips the Switch on $1.2 billion Topolobampo Pipeline in Mexico

TransCanada Flips the Switch on $1.2 billion Topolobampo Pipeline in Mexico

TransCanada Corp. has placed its Topolobampo Pipeline into service in northern Mexico, according to a July 16 announcement. The pipeline provides capacity for 670 million cubic feet per day (MMcf/d) of natural gas to markets in the states of Chihuahua and Sinaloa. The project represents an investment of approximately $1.2 billion (USD) and provides the upstream interconnection with the company’s Mazatlan Pipeline. 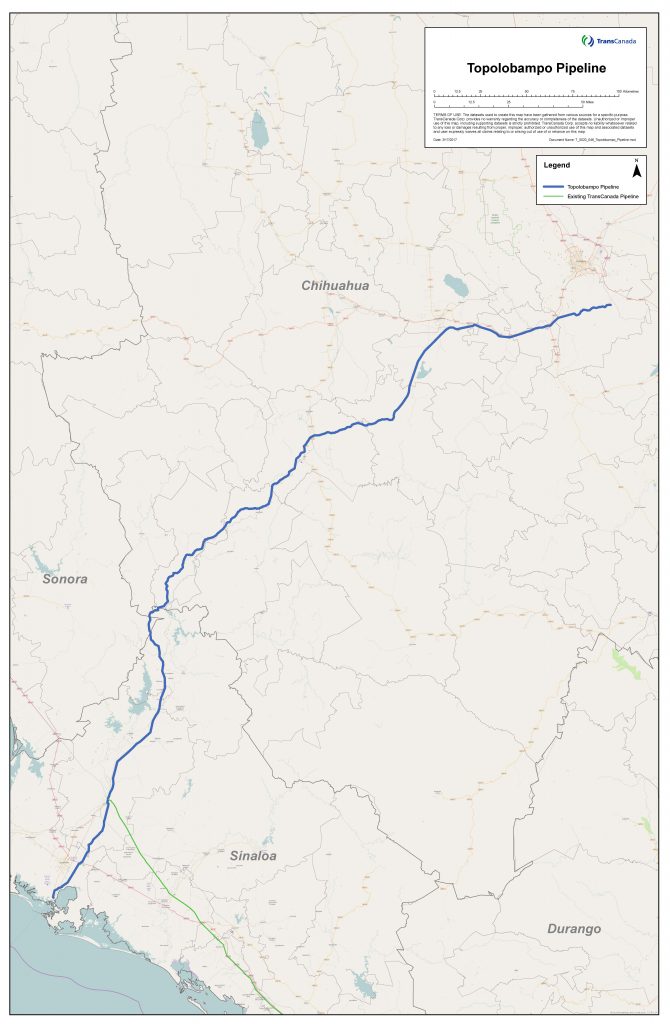 The project involved the construction of approximately 348 miles of 30-in. diameter pipeline from El Encino, near the city of Chihuahua, to Topolobampo, near the city of Los Mochis, Sinaloa. Combined, the Topolobampo and Mazatlan pipelines form a system that adds more than 540 miles of critical energy infrastructure that will play a fundamental role in providing natural gas to power plants, industrial and urban markets for the economic development of the northwest region of Mexico.

“The completion of the Topolobampo and Mazatlan pipeline system is an important milestone for TransCanada as we continue to expand our portfolio to deliver natural gas to serve Mexico’s electric generation needs. We are developing the infrastructure to feed new power plants and convert existing fuel oil and diesel power plants, thereby reducing both the cost of electricity and greenhouse gas emissions,” said Robert Jones, president, TransCanada Mexico. “We are proud of the way we overcame technical challenges and completed this difficult project safely.”

The construction of the Topolobampo Pipeline presented some of the most demanding construction challenges in the country given the geography along the route, including crossing the Tarahumara mountain range near the Copper Canyon in the state of Chihuahua. TransCanada used innovative techniques such as a raised bore to cross the extreme steep cliff faces and air cranes for transporting pipes to remote locations along the route.

Over the course of construction, the project employed nearly 3,500 employees and contractors and achieved more than 10 million man-hours without a lost-time incident. Throughout the course of the project, TransCanada worked closely with landowners and local officials to ensure they were an important part of the development and construction process. This project was one of the first projects in Mexico to include federal government-led Indigenous consultations with impacted communities.

TransCanada’s presence in Mexico dates back to the mid-1990s with the construction of the first two privately owned pipelines in the country. The company’s natural gas pipelines in Mexico – either in operation or under construction – now exceed 1,982 miles, with a capacity of 7.1 billion cubic feet per day (Bcf/d) and an investment of approximately $5.6 billion.