TransCanada Corp. is making changes to its Energy East pipeline based on extensive landowner, environmental, community and customer input. The company announced Dec. 17 that it filed an amendment to its existing application with the Canadian National Energy Board (NEB) to adjust the proposed route, scope and capital cost of the project. 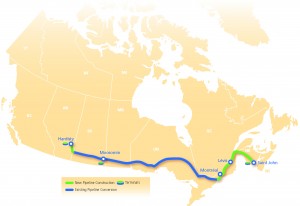 The proposed route of Energy East pipeline will be amended after public input.

The amended application includes route and scope changes that come in direct response to efforts to avoid sensitive environmental areas, while confirming this project will safely create economic benefits and energy security through job creation and local community tax revenue across Canada, according to a company statement.

“This amended filing has been shaped by direct, on-the-ground input from Canadians across the country,” said Russ Girling, TransCanada’s president and CEO. “The thousands of Canadians we have met with since 2012 understand the importance and significance of what this project means to our country’s energy security and economic prosperity. However, Canadians also want assurances this project does not come at the expense of safety and the environment – and this application shows we can do that. We are listening and acting on what we have heard.”

Responding to the input of local communities along with efforts by TransCanada to better optimize environmentally sound pipeline routing resulted in close to 700 route changes to the project. Changes to the project schedule and scope have contributed to a new projected capital cost of $15.7 billion, excluding the transfer of Canadian Mainline natural gas assets.

In an effort to improve transportation safety, the Energy East pipeline will have the capacity to displace the equivalent of 1,570 rail cars of crude oil per day to eastern Canada. A recent study supports this point by concluding that Energy East would change the mode of transport of crude oil currently moving on rail to pipeline. (Navius Research Report to the Ontario Energy Board, August 2015)

The changes to the scope of the Energy East project have resulted in an increase in the expected employment opportunities and economic benefits of the project. An updated Conference Board of Canada study indicates that the project will continue to have significant and lasting economic benefits for Canadians through strong job growth, GDP growth and increased tax revenues to build roads, schools, hospitals and bridges.

When expected operations of the pipeline begin in 2020, the 1.1 million barrel per day Energy East project will dramatically reduce the need for Eastern Canadian refineries to continue to import hundreds of thousands of barrels of higher-priced foreign oil, keeping jobs and investment here in Canada.