Work will soon begin at the Enoch Cree Stockpile Site location to prepare for storing pipe, fittings, valves and other materials needed to continue construction of the Trans Mountain Expansion Project.

To celebrate the work, and affirm the community’s support for the project, Canada’s Minister of Natural Resources, the Honourable Amarjeet Sohi, joined members of the Enoch Cree Nation, Alberta Premier Rachel Notley and Kinder Morgan Canada President Ian Anderson at the Enoch Cree Stockpile Site for a special land blessing ceremony on July 27. 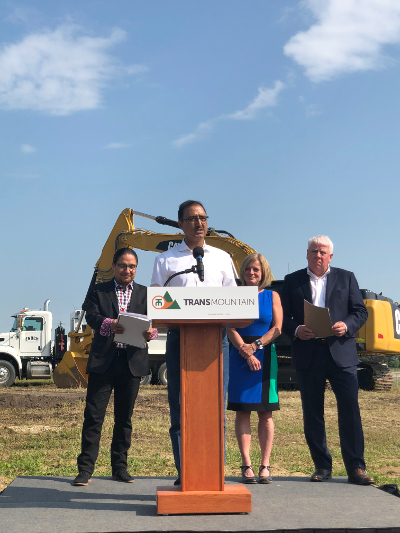 Canada’s Minister of Natural Resources, the Honourable Amarjeet Sohi addresses the importance of the Trans Mountain Expansion Project to Canada and its people.

“We are proud of the relationship we have built with Trans Mountain and to partner with them on this project,” said Billy Morin, chief, Enoch Cree Nation. “This worksite will allow us to create opportunities for our people and community for many years to come.”

The Government of Canada is committed to making investments that create good, well-paying jobs that help strengthen and grow the middle class; that help get Canada’s resources to world markets; and that deliver economic benefits for all Canadians, now and for years to come. These include the recent commercial agreement with Kinder Morgan to secure the timely completion of the Trans Mountain Expansion Project.

“Today’s blessing is an important step forward in the construction of the Trans Mountain Expansion Project. It demonstrates just how integral our Indigenous communities are to the success of this pipeline and Alberta and Canada’s economic future,” said Notley. “With this blessing, construction for the Enoch Cree Stockpile Site can begin and we move that much closer to getting this pipeline built.”

The blessing ceremony marks an important milestone in the ongoing construction of the project. It affirms the local community’s support for the project, demonstrates the importance of the partnerships with Indigenous communities and represents another step forward on the path to reconciliation between the Government of Canada and Indigenous peoples.

“Canada is a place where the environment and the economy go hand in hand and where projects that are in the national interest get built,” said Sohi “The blessing received today is an important milestone in the ongoing construction of this project, and it also reflects our government’s important partnership with all Indigenous people in Canada, including the Enoch Cree Nation.”

The Trans Mountain Expansion Project is in Canada’s national interest. In addition to creating more jobs for hard-working Canadians, it will allow Canada to develop its natural resources and access new markets that will provide a fair price for those resources. It will also allow Canada to ensure greater investor confidence, while respecting Indigenous communities and protecting our environment.

“Today’s blessing ceremony is further recognition of the importance of getting this project built,” said     the Honourable Bill Morneau, minister of finance. “The construction and operation of the Trans Mountain Expansion Project will deliver significant economic benefits to communities across Alberta and British Columbia — including Indigenous communities like Enoch Cree Nation — as well as for Canada as a whole.”

On May 29, recognizing the project as an investment in Canada’s future, the Government of Canada announced it had reached an agreement with Kinder Morgan to purchase the company’s Trans Mountain Expansion Project, related pipeline and terminal assets for $4.5 billion, subject to certain conditions. This agreement included provisions to protect the summer construction season and also thousands of good, well-paying jobs for Canadians, including members of Indigenous communities.

The Trans Mountain Expansion Project involves building a new pipeline along the existing Trans Mountain Pipeline running from Edmonton, Alberta, to Burnaby, British Columbia, and expanding the capacity of the Westridge Marine terminal in Burnaby. This expansion will increase daily capacity from 300,000 to 890,000 barrels, while improving market access to the U.S. Pacific Coast and Northeast Asia.

In the course of the federal review of this project, the Government of Canada consulted 117 potentially affected Indigenous rights holders, marking the deepest federal consultation to date on a major project. Over the coming months, construction activities will be accelerating, and from Edmonton to Burnaby, Canadians are already hard at work developing stockpile sites, construction yards and camps.