Canada’s oil and gas pipeline industry has been facing changes on the regulatory front. One major change occurred in August 2019, when the National Energy Board (NEB) was replaced with the Canada Energy Regulator (CER) as part of the Canadian Energy Regulator Act.

Canada’s oil and gas pipeline industry has been facing changes on the regulatory front. One major change occurred in August 2019, when the National Energy Board (NEB) was replaced with the Canada Energy Regulator (CER) as part of the Canadian Energy Regulator Act.

The CER released its long-term energy outlook on Dec. 3, 2019, title “Canada’s Energy Future 2019: Energy Supply and Demand Projections to 2040.” The report explores how new technologies, infrastructure developments and climate policy will impact Canadian energy consumption and production trends over the next 20 years.

Canadian oil pricing and production trends will rely heavily on the availability of export pipeline and rail capacity, according the CER. If approved pipeline projects, such as Trans Mountain, Keystone XL, Line 3 and others, proceed as announced, along with continued volumes of crude by rail, the outlook predicts that there will be sufficient takeaway capacity to accommodate production growth over the next 20 years. Other findings in the CER report include:

To ensure the continued success of the pipeline industry in 2020, Chris Bloomer, president and CEO of the Canadian Energy Pipeline Association (CEPA), said in a Jan. 8 statement that the industry needs to be focused on three key areas: collaboration, competitiveness and continuous improvement.

Bloomer added that the industry also has to continue building its understanding of issues related to climate change and Indigenous matters and participation.

“Many of these are long-term priorities,” he said. “In the short-term, we must see new pipelines in the ground. The Trans Mountain Expansion Project under construction is a great step forward. Clarity and certainty on other major projects, such as Keystone XL, Coastal GasLink and Enbridge Line 3, are all good signals. This positive progress will allow our industry to continue delivering energy in the safest and most responsible way for Canada and the world.”

The following is a snap shot of some of the major projects to expand Canada’s crude oil transportation infrastructure that are under way, awaiting regulatory approval or still in the planning stages.

Overview: The long-delayed Keystone XL pipeline project is a proposed 1,179-mile, 36-in. diameter crude oil pipeline from Hardisty, Alberta, to Steele City, Nebraska. At an estimated cost of $5.3 billion (USD), the pipeline will transport crude oil from Canada, as well as the Bakken shale region of Montana and North Dakota. The pipeline will have capacity to transport 830,000 bpd to Gulf Coast and Midwest refineries. After years of legal battles, TC Energy has secured plans to begin construction in April, starting near the U.S.-Canada border in Montana.

Overview: Enbridge’s Line 3 Replacement Program involves replacement of all remaining segments of its Line 3 pipeline between Hardisty, Alberta, and Superior, Wisconsin, along with construction of associated facilities. The project involves replacing existing 34-in. diameter pipe with 36-in. diameter pipe from Hardisty to Gretna, Manitoba, and Neche, North Dakota, to Superior. Segments of Line 3 from the U.S.-Canada international border to Neche, and near the Minnesota-Wisconsin border to Enbridge’s Superior Terminal, will be replaced with 34-in. diameter pipeline and are under separate segment replacement projects. The Canadian government approved the project in November 2016. Upon completion, the pipeline is expected to have an initial capacity of 760,000 bpd and is expected to cost $5.3 billion (CAD). Construction of the Canadian portion of the Line 3 Replacement Program is complete, with the new Line 3 beginning commercial service in December 2019. Meanwhile, the company continues to await final permitting before construction can begin in Minnesota to enable completion of the $2.9 billion (USD) U.S. portion of the project. As of January 2020, right-of-way reclamation was almost complete in most of the nine construction spreads, with less than 100 km remaining in southeast Saskatchewan and southwest Manitoba. This final reclamation work will continue in June and be completed in 2020. With the new replacement line operational, the existing Line 3 pipeline will be decommissioned in accordance with regulatory requirements. In the United States, the Wisconsin segment of the project entered service in May 2018. Construction in Minnesota and North Dakota will begin concurrently, upon receipt of all permits and approvals. On Feb. 3, the Minnesota Public Utilities Commission approved the project’s second revised Final Environmental Impact Statement (FEIS) and reaffirmed the pipeline’s applications for a certificate of need and routing permit. Enbridge continues to work with the state and federal permitting agencies to finalize the permits required to start construction.

Overview: The Trans Mountain Expansion Project is essentially a twinning of this existing 1,150-km pipeline between Strathcona County (near Edmonton), Alberta, and Burnaby, British Columbia. It will create a pipeline system with the nominal capacity of the system going from approximately 300,000 to 890,000 bpd. The project also includes an expansion of the Westridge Marine Terminal at Burnaby. The Canadian federal government acquired the Trans Mountain from Kinder Morgan in August 2018 for $4.5 billion (CAD). The Canadian Federal Court of Appeals subsequently reversed the government’s approval of the project. The NEB again recommended that the project is in the Canadian public interest on Feb. 22, 2019. On June 18, 2019, the Government of Canada approved the expansion project. Following that decision, four First Nation’s groups challenged the project, arguing that the government had not conducted its due diligence to consult with Indigenous people. On Feb. 4, Canada’s Federal Court of Appeals ruled against the four First Nations groups, allowing the Trans Mountain project to proceed. To date, Trans Mountain has spent $2.5 billion on the expansion project and anticipates to spend an additional $8.4 billion to complete the project, plus $1.7 billion of financial carrying costs, for a total cost estimate of $12.6 billion. The in-service date is expected to be December 2022. 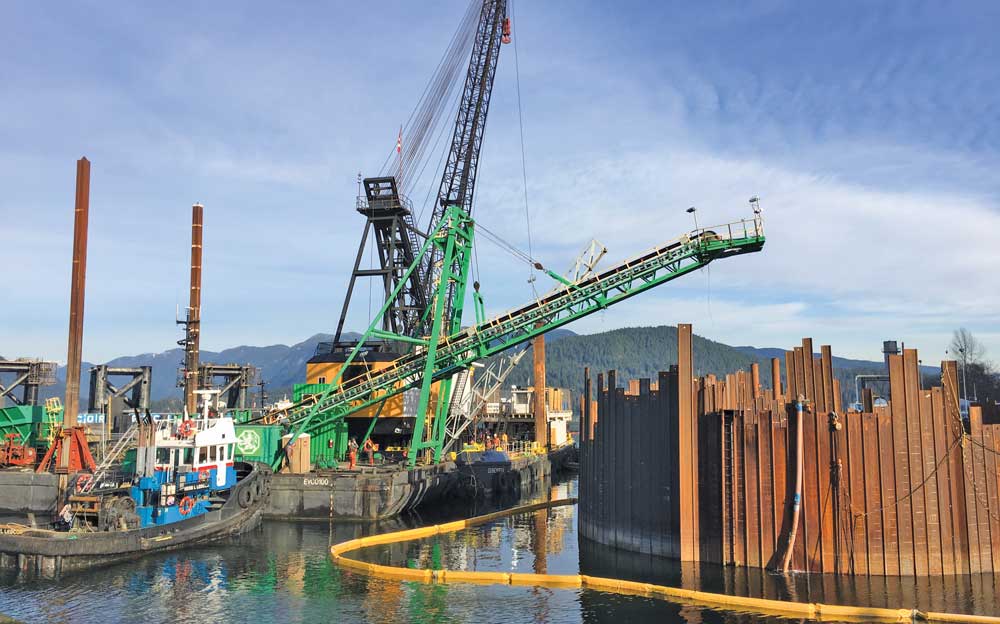 Part of the Trans Mountain Expansion Project includes upgrades to the Westridge Terminal in Burnaby, British Columbia. Some work on this segment was conducted in December 2018, before the project was halted amid further regulatory review.

Overview: Inter Pipeline has received commercial support for the construction of a $100 million, 75-km, 8-in. pipeline connection between its Bow River and Central Alberta pipeline systems. The new pipeline, called the Viking Connector, will link various grades of light crude oil from the Viking and Mannville formations in east-central Alberta to the Edmonton market hub, with an estimated throughput volume of 10,000 to 15,000 bpd. Construction began in August 2019 and is expected to be completed in the first half of 2020.
This is not a comprehensive list of the oil pipeline projects in Canada. For more information about these and other projects, you can visit the CER website at cer-rec.gc.ca or the Alberta Energy Regulator (AER) site at aer.ca.

North American Oil & Gas Pipelines provides quarterly updates of oil and gas pipeline projects in the United States in Canada. The next update will be in May, covering U.S. oil pipeline projects.