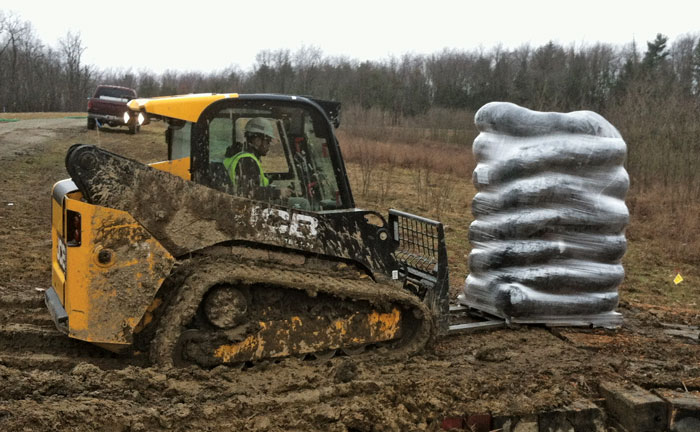 Not many resumes chronicle a transition from designing computer networks to erosion and sediment control, but Mike Zock’s is one of the few. Zock owns MAZCON Manufacturing & Logistics, a company specializing in advanced erosion control products. Prior to starting the company, he worked in an office, providing computer network solutions for clients worldwide. When he got tired of sitting behind a computer screen, he founded MAZCON.

“I didn’t want to do networks anymore, so I started playing in dirt,” Zock jokes. “It was great therapy. I’m happier in dirt than in computers — using big machines and digging up stuff.”

When MAZCON was founded 10 years ago, it primarily served as a consulting firm. Zock managed large sitework projects — including residential housing developments — making sure the construction timeline was being met and regulators, engineers and contractors were on the same page. Project management eventually transitioned into business development in areas of storm water management and erosion control. In 2009, when MAZCON began consulting in the oil and gas industry, Zock saw another window of opportunity.

“I decided to leave the consulting/project management side of things and transitioned into manufacturing products for the oil and gas industry,” Zock explains. “On March 15, 2011, my company began manufacturing something called Compost Filter Sock. I only had one other employee and a skid steer, but the wind was in our favor. The oil and gas industry was going to be huge, and I needed to be directly in the game.” 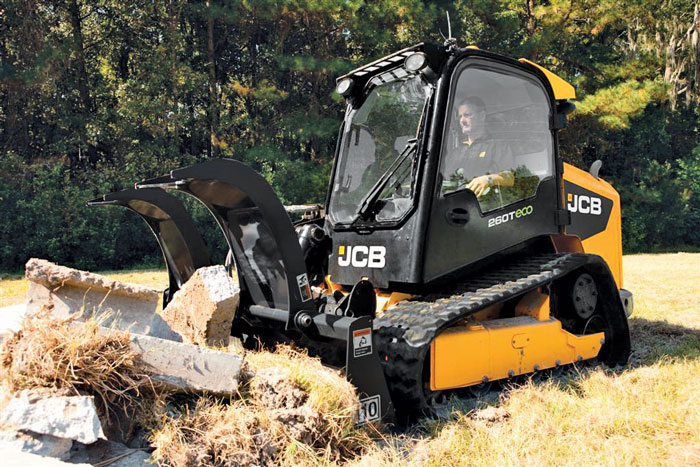 Today, MAZCON is the largest manufacturer of palletized Compost Filter Socks (CFS) in the world. CFS is the newest and one of the most effective sediment containment technologies available. It consists of a mesh fabric tube filled with composted hardwoods to create an all-natural water filtration system. The shredded woodchips create a matrix that filters water twice as effectively as silt fence, another sediment control product.

“It’s organic. It’s recyclable. It’s renewable. And it’s a domestic green technology,” Zock says. “It acts like the floor of a forest. The rainwater seeps in and runs downhill, and it’s cleaned by the organic debris from the trees — bark, twigs and leaves. We just put that natural material into tubes around jobsites for muddy water to run through.”

What’s the connection between CFS and the oil and gas industry, though? The answer lies in the location of MAZCON’S high-tech factory in central Pennsylvania. Pennsylvania sits on the Marcellus shale formation, a layer of sedimentary rock containing huge stores of natural gas. The area extends along the East Coast from southern New York into Pennsylvania and eastern Ohio and through Maryland, West Virginia and Virginia.

Shale Leads to Boom
Zock knew his prime location on the Marcellus shale formation was a business opportunity.

“Now that we have a means of extracting the natural gas from shale, we can import less oil from overseas,” he says. “I saw the economy booming around me; roads, bridges, hotels and restaurants were being built and unemployment was decreasing. It was crazy, exciting and new.”

Additionally, when the country experienced the economic downturn of 2008, developers canceled four housing development projects that MAZCON would have been project managing, Zock explains, “So, our transition into the oil and gas industry was partly out of necessity.”

Zock’s site work and environmental experience made for a smooth transition into manufacturing CFS. CFS is an ideal sediment control solution on pipelines and around drilling sites to protect the surrounding environment from polluted runoff.

“In the 24 months since we began manufacturing, we’ve become the largest producer nationally, delivering over 3.5 million linear feet of CFS to jobsites in 16 states,” Zock says. “We’re knee deep in it and passionate about it.”

In order to support the extreme boost in business, Zock had to ramp up his resources. He now employs a staff of 20, has a fleet of semi-trucks and produces at multiple factories.

“Our JCB equipment — a track loader and telehandler — are at the heart of our production success,” he says. “The two JCB pieces are powering change and growth.” 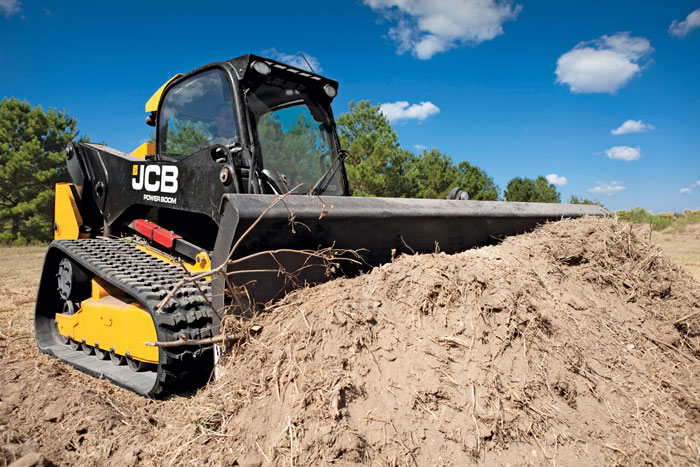 When CFS took off in late 2011, one of Zock’s first purchases was a JCB 260T track loader. Because it met and exceeded his expectations so well, he followed suit with a JCB 531-70 telehandler toward the end of 2012.

Before buying a track loader and telehandler, Zock did extensive research. “I’m a tech guy — I like the details. I looked at every equipment manufacturer and compared features from fuel consumption to quality. I also tested them all. When it came to it, JCB clearly stood out,” Zock says. “I also have a great working relationship with my JCB dealer, Walsh Equipment. I trust them and knew they wouldn’t lead me in the wrong direction.”

On a day-to-day basis, MAZCON’s work revolves around its equipment. “We use the track loader to make CFS or install it,” he says. “At our factory we use it to move mulch and feed machinery. In the first couple of months of owning it, we put 500 hours on our track loader, which is crazy.”

In the erosion industry, a track loader is much more effective than a wheel-based skid steer. The rubber tracks give Zock and his employees the traction they need to maneuver on dirt and uneven ground and in the snow and mud. At the MAZCON yards and on jobsites, the track loader is used to load and unload palletized CFS from semis and trailers and place it where it needs to go along pipelines.

“We demand a lot out of our track loader,” he says. “It runs at high throttle for long periods of time, and the dust takes a toll on the inlets and filters. So far it has worked great, and JCB’s reputation in safety really sends a message when we’re on a jobsite.”

Nuts About Safety
Zock says his final decision to purchase the JCB track loader was based on three features: the side-entry, fuel consumption and the unit’s overall quality and features.

“From a safety perspective, the side-entry on the 260T track loader is huge. It was the biggest reason we bought it,” Zock adds. “We can’t take any chances on a drilling jobsite and compromise someone’s safety. Knowing the skid steer won’t topple forward and trap someone inside or that the boom won’t drop on someone when crawling in or out of the machine gives us peace of mind, and the visibility the one-armed boom offers is extremely important.

“Energy guys are safety nuts,” Zock emphasizes. “Working in the industry, if someone has one safety issue, they’re done; they’re out of a job. Safety violations and people getting hurt simply cost way too much money. One of the biggest reasons we invested in the JCB 260T was because of the safety features of the machine.”

With safety being paramount within the oil and gas industry, Zock needed to make a strong, positive first impression when showing up on the well pad and other jobsites.

“We needed to show that we are a quality and safety conscious company,” he says. “Our equipment is our lifeblood, and we run every day because of it. Our two biggest assets are our JCB track loader and telehandler.”

Important Decisions
Because the track loader is constantly in use, fuel consumption was a major concern. “We needed a fuel-efficient machine to offset our cost of purchasing fuel,” Zock says. “Within two hours of asking Walsh Equipment for information on fuel consumption, we had the information in hand. No other vendor could provide me with that information. It impressed me that JCB was already on top of the fuel consumption issue, and I could tell they were very aware of the importance of efficiency. The fuel consumption rate on the 260T was lower than any other machine. We save hundreds of dollars a month on fuel.”
The quality of the JCB track loader clinched the deal for Zock. The unit is easy to service and simple to operate, he said. And in hindsight, after owning and using the track loader on a regular basis, Zock said the quality has proven itself.

Purchasing the telehandler was a recent decision, and the machine is already integral to MAZCON’s daily operation. Zock’s crew uses the telehandler in MAZCON’s yards to combine piles of mulch material after it’s dumped by semis.

“We use a two-yard bucket on the 531-70 to manage the material by combining the shorter piles,” he says. “The longer reach of the boom helps us pile the woodchips and turn the piles so they’re well composted. We manage 1,000-yard piles on a daily basis. We could use a dozer or front loader, but the telehandler gives the best performance of a small, lightweight, tire-based machine in various modes.”

Compared to just two years ago, MAZCON has grown exponentially. From one employee and an old skid steer to a 20-employee, high-tech operation, Zock’s leap into manufacturing CFS has been a success. He expects the 2.2 million linear feet of CFS he sold in 2012 to grow this year, not only in the oil and gas industry, but also for regular construction and homebuilding projects.

“We’re using the machines for very different applications than the typical customer, and it’s working for us,” Zock says. “I think there is still a lot of growth for CFS in the natural gas and pipeline industry throughout the U.S. I’m excited about the opportunities to come, and I can tell you that JCB will be there with us for the ride.”

Jessica Simpson is a public relations associate for Swanson Russell, an advertising and communications agency based in Lincoln, Neb. She works closely with clients in the construction and green industries.