Devices used to travel in lines have become known by many names, but one that is most commonly used throughout the industry is “pigs.” The term was probably conceived during an operation in the early 1900s, where a crude oil pipeline in Pennsylvania required more energy in order to maintain its normal throughput. Operators decided to insert a bundle of rags tied together with bailing wire. The progress of this package was monitored by operators listening at an above ground system for the sounds of the wire against the pipe wall. The screeching sounded much like a pig, and so the name was adopted and sticks to this day.

In order to maintain flow conditions, especially in crude oil and offshore pipelines, pigs are inserted into the normal flow in order to clean the inner wall of the pipeline. With regular maintenance and a pigging program, the line will reach optimum flow rates that will increase productivity.

During pipeline construction, pipeline pigs are often used to remove debris, mill scale and liquids. Pigs are also used in this phase to gauge the new line to insure against internal intrusions. It is not unusual for pigs to be obstructed during construction operations and can than prove quite costly, turning profit into losses, if not covered by contingencies. Figuring out the solution to this problem is where advancements in
the pipeline industry is currently moving.

At each stage of pipeline operations where pigs are used, there is always an uncertainty as to whether the pig will reach its receiving facility. The use of flow rate conditions, together with careful monitoring of the pressure, helps operators keep track of the pigs, but the unknown factor is always slippage of product past the pig. 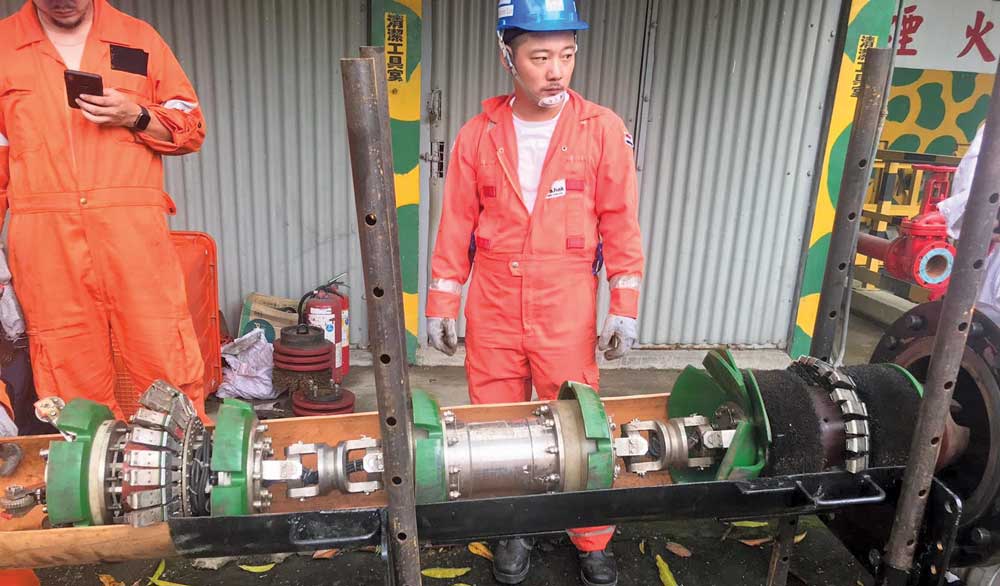 Pigs may also become obstructed by intrusions, excessive wear, or the pig may become damaged, which can cause it to “hang up” inside of the line. Various line conditions, including partially open valves and material inside of the line, such as buildup, lumber and even lunch boxes have caused a pig to stop dead in its tracks. Due to these uncertainties, different types of pig detectors have been developed.

In this case study, we used the following tracking technologies explained below:

A geophone is an acoustic device that converts ground movement and vibrations (velocity) into voltage. This device is one of the first upgrades from having operators listening with their ear to the pipeline for the squeal. It allows a listener to hear extremely low sounds from great distances, using a high-tech ground probe. The probes are placed on the ground surface in various patterns, or arrays, and will amplify the sound from the vibrations generated by an approaching pig. That sound can be heard through a geophone from miles away to help indicate exactly where the pig is striking the pipeline welds.

Geophone technology for pig tracking has evolved so much that some devices can be connected to smartphones, while others are Bluetooth compatible, allowing the operators to sit in their trucks and listen to the pig sounds through their car radio system. Some more advanced ones can even estimate the velocity that the pig is traveling.

Extremely low frequency (ELF) is the designation for radio waves with frequencies from 3 to 30 Hz.

Historically, pig tracking methods have been limited by the level of the frequency of the signal emitted by a transmitter installed on the pig. The frequency signal generated by the transmitter is detected by a receiving device located on or near a pipeline. As a general rule, the frequency most commonly used is 22 Hz.

A higher frequency is required to track pigs moving at a higher velocity to ensure that the pig is monitored as it passes a detection unit. Lower frequency settings are used when a pig is to be monitored at a fixed location for an extended period.

Because of that, the most modern ELF transmitters and receivers will allow the user to change and choose the desired frequencies that will perform better for each situation.

Before a pig run, the systems were put in place and a signal frequency was selected in accordance with the type of tracking required.

Above Ground Markers (AGMs) are designed to record the GPS time of passage for both transmitter-equipped and magnetic (MFL) inspection tools without transmitters.

In the case of a passing intelligent inline inspection (ILI) tool — sometimes called a “smart pig” — the precise time and the physical pipeline location is correlated with the data recorded by the inspection tool. This data provides a major increase in the accuracy of a smart pig’s feature location callouts.

AGMs were at first designed to replace magnets installed on pipelines and/or to add additional reference points where magnets can’t be installed.

They can be used for tracking and correlation points on smart pig runs.

The most advanced AGM units are capable of transmitting data using cellular phone or satellite networks to a remotely operated station.

In this case study, we had to clean and prepare several pipelines, from 10 in. up to 20 in., to be inspected with smart pigs.

During the cleaning stages of the pipelines we sometimes had to run more than one pig inside a pipeline at the same time. In order to facilitate the tracking, we used transmitters with different frequencies in each pig deployed. That not only helped us track better, but also helped the team to inform the client where each pig was located inside the pipeline throughout their entire run.

AGMs were deployed and placed on top of all pipelines before each pig run was scheduled to take place. When a pig approached a tracking site, the AGMs were activated, and they recorded GPS position, frequency and time of each pig passage.

Three teams with two people each followed the pigs with a geophone and also checked the information recorded by the AGMs in place.

After each run, spreadsheets were generated with crucial data collected by the field team.

One of the biggest challenges was to set up the equipment properly. All pipelines in this project were located in very urban areas, where the team had a lot of traffic, power lines buried close to the pipelines and, in certain areas, proximity to high-speed rail. All of these factors affected the quality of the signal received, so several cleaning runs were made just to adjust transmitter frequencies and potency, AGMs gain and fine tune all tracking equipment. All information generated by tracking these pigs helped the integrity management team learn particularities of each individual pipeline, such as areas where there are higher risks of a pig getting stuck or even generating data such as areas with speed excursion. And before running smart pigs, the client understood how to better operate each pipeline, by controlling their flow better, adjusting differential pressure, etc., before and during the next ILI runs.

When we started to run smart pigs, the system operators could predict the pig’s location, speed and estimated time of arrival, ensuring a better visibility during the last steps of the project.

Combining these advanced technologies helped to mitigate risks of unexpected challenges during an ILI run. Tracking all pigs helped prevent costly incidents, such as lost pigs, by providing accurate
information on a pig’s location. A lost pig can get stuck and interrupt or stop product flow in a pipeline and can also lead to pipeline damage and unforeseen service disruptions.