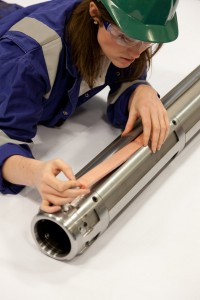 Tracerco’s new high-tech laboratory in Edmonton will analyze more than 1,000 samples per month and significantly improve turn-around times to customers.

The new laboratory, which has been established in response to an increase in customer demand, will be equipped with state of the art analytical equipment capable of ultra-high precision detection and quantification of its intelligent tracer molecules in production fluid samples.

The high-tech laboratory will analyze more than 1,000 samples per month locally and will significantly improve turn-around times to customers.

“The new site is another exciting expansion in our rapidly growing worldwide network of reservoir chemical tracer laboratories,” said business director Paul Hewitt. “Previously produced fluid samples for our Canadian customers have been shipped to our U.S.-based lab for analysis, adding several days to sample turnaround. The new lab will help us eliminate time lost while the samples are in transit, improving the service we can give to our customers. In turn, this gives them the all-important reservoir and oil well characterization data to make decisions on drilling strategy much quicker.”

The new laboratory is the second Tracerco has opened in the last six months having previously expanded its network in Abu Dhabi and Oman in response to high demand for their reservoir technologies in the region. It brings the total number of laboratories that Tracerco operates worldwide to eight with another five planned before the end of the year.

Tracerco, which is part of the FTSE 100 (London Stock Exchange) company Johnson Matthey, was an industry pioneer in developing intelligent tracer technology for reservoir characterization and continues to invest in cutting-edge tracer research and development. The technologies can be deployed without interruption to well production and allow operators to gain a better understanding of reservoir fluid and gas movements throughout their oil and gas reservoirs and near and within the wellbore.