The Evolution of Pipeline Leak Detection

As the sheer number of pipelines crisscrossing the country continues to increase, there is an urgent need to ensure pipeline infrastructure safety. The age of many of the pipelines and the number of different products flowing makes this a challenging prospect.

Now, new technology has been developed that meets the need for reliable protection that complies with regulatory requirements while eliminating false alarms. Using pattern recognition, an advanced computational technology for getting more information from the ever-growing pool of sensor data collected, these new systems are reducing resources needed to manage pipeline leak detection while gaining more reliability. Among the new technologies, extended real time transient model (E-RTTM) technology has proven to be the most effective detection system for monitoring and protecting pipelines in all operating conditions. 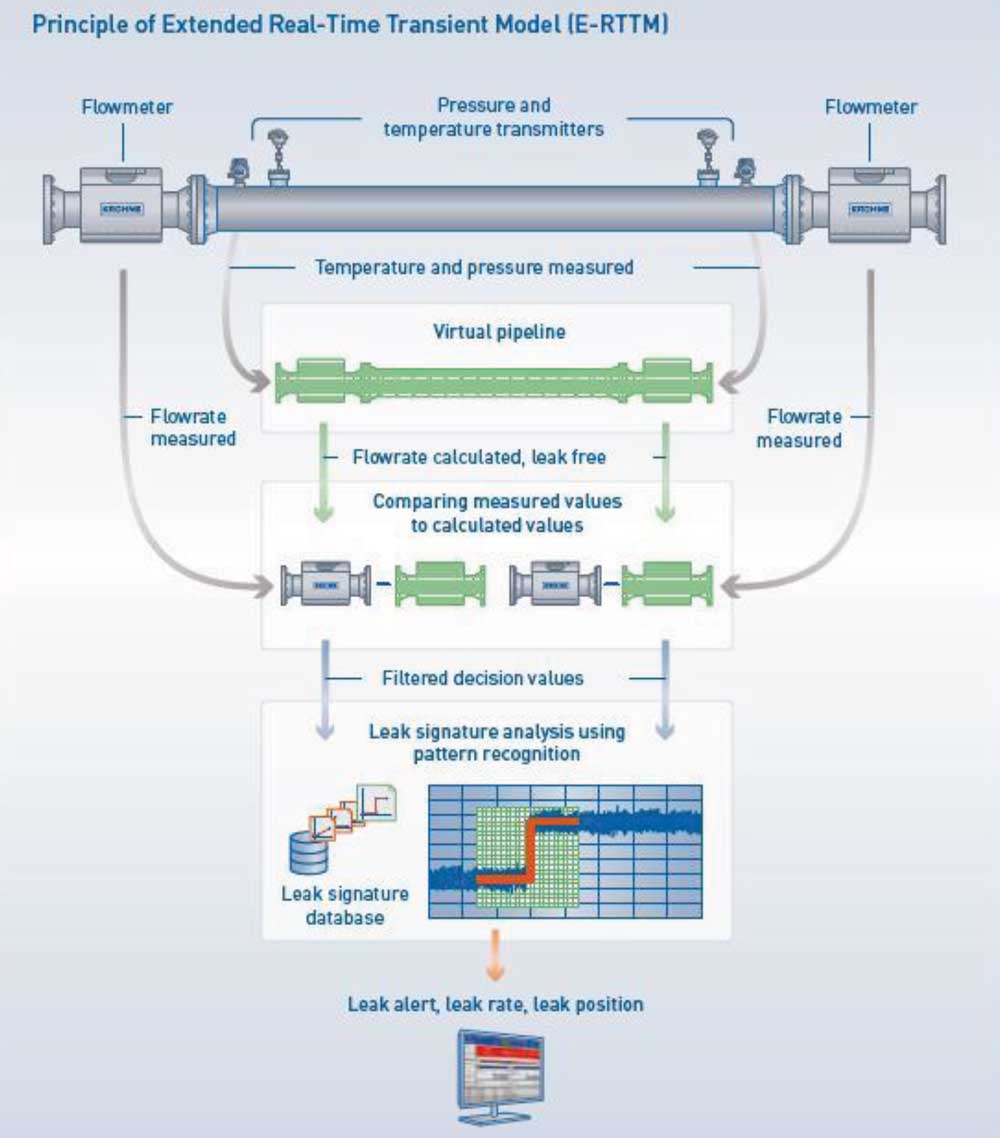 Leak Detection Requirements Around the World

Buried underground, the pipeline system tends to get less attention than other infrastructure systems like highways and bridges. In addition, regulatory oversight of pipeline safety, operations, and worthiness is somewhat fragmented based on what is being transported. Key examples include crude oil pipelines from oil fields to refineries; multiproduct pipelines from refineries to tank farms; subsea pipelines from floating production storage and offloading (FPSO) units and platforms; non-continuously operated transport pipelines (for example, for jet fuel); water pipelines from desalination plants to cities; and natural gas pipelines.

Leak detection awareness has grown in recent years, spurred by hundreds of incidents — small and large. Explosions caused by pipeline leaks have killed or injured hundreds, while millions of gallons have leaked from heavy crude oil pipelines onto land or into the ocean.

In addition, a federal leak detection study, prepared in response to the Pipeline Safety, Regulatory Certainty, and Job Creation Act of 2011, sets the tone for a broader national conversation. The 2012 study1 notes, “Due to the vast mileage of pipelines throughout the nation, it is important that dependable leak detection systems are used to promptly identify when a leak has occurred so that appropriate response actions are initiated quickly. The swiftness of these actions can help reduce the consequences of accidents or incidents to the public, environment, and property.”

There are three basic leak detection systems: internal, external and visual inspection.
Internal systems use measurement sensors providing flow or pressure readings, and perform calculations to estimate the state of the fluids within the pipe. These systems must follow recommended practices found in American Petroleum Institute (API) 1130 Computational Pipeline Monitoring for Liquid Pipelines. The three main categories of internal systems include:

Visual inspection systems include examining the pipeline from the outside to determine if there is a leak. This can be done by flying over with a drone or helicopter, driving alongside the pipeline or using fiber-optics on the full pipeline length to detect temperature changes. Because it relies on human intervention, visual inspection is considered the most effective of all methods, but it is extremely expensive.

Table 1 provides a general comparison among the systems for a variety of parameters. However, it should be noted that the Leak Detection Study notes that it is good engineering practice to use separate subsystems, including internal, external, and inspection technologies. “They should be carefully selected and engineered to complement each other,” the study states.

In recent years, new extended real time transient model (E-RTTM) computational pipeline monitoring technology has been developed into PipePatrol, a detection system that can be used for monitoring and protection of pipelines in all operating conditions — from a long or short distance pipeline for oil, gas, or water, to refined products in the chemical industry or others.

Using a unique leak pattern recognition algorithm, the E-RTTM technology allows extremely fast and sensitive leak detection in any kind of pipeline operation — without generating false alarms. Unlike other systems, it does not simply compare outlet flow with inlet flow. Instead, it uses the measured conditions to calculate the hydraulic profiles of the pipeline. One of these, the calculated flow profile, is compared to the measured flow for both inlet and outlet to determine what the pipeline flow should be if there is no leak.

In the first stage of E-RTTM, to generate the specific leak patterns, a fully dynamic, real-time process model calculates target values. This model is based on the method of characteristics considered the most accurate for one-dimensional flows in pipelines. It has been continuously improved over the last few years, and now includes a full thermal/temperature model, so it can accurately model crude oil or dense phase gases like supercritical carbon-dioxide or ethylene.

Information about the real pipeline is transferred into a computer, including the elevation profile, product and material characteristics, and the thermodynamic equation.

Based on the physical laws of conservation of momentum, mass and energy, a virtual pipeline is developed, driven by the online measurements. This virtual pipeline now calculates what the pipeline flow should be if there is no leak.

As deviations will be created by other events, decision values are processed by the second stage, signature analysis. Signature analysis continuously monitors decision values for different kinds of patterns. Depending on the detected pattern, the system will suppress a message, raise a warning, or raise a leak alarm. Therefore not every deviation will lead to an alarm, which avoids false alarming. This is key, because false alarms can be extremely expensive when they shut down the line or process, or lead to flaring of the product.

In summary, unlike other CPM methods, E-RTTM does not simply compare outlet flow with inlet flow. Instead, it uses the measured conditions to calculate the hydraulic profiles of the pipeline. One of these, the calculated flow profile, is compared to the measured flow for both inlet and outlet.

The signature analysis method uses leak pattern recognition to continuously analyze this data and determine the pipeline’s leak status. Because E-RTTM uses relative values, it continues to work effectively under transient pipeline conditions, without any significant effect on its sensitivity.

In fact, the PipePatrol system was cited in the PHMSA Leak Detection Study, which noted, “There is no reason why several different internal leak detection methods should not be implemented at the same time. In fact, a basic engineering robustness principle calls for at least two methods that rely on entirely separate physical principles. As an example, the Extended-RTTM system trademarked by KROHNE Industries, USA uses an RTTM in conjunction with several other API 1130 techniques.”

One example is a chemical facility in South Charleston, West Virginia, where the PipePatrol E-RTTM system is being used in a 7-mile, 4-in. ethylene oxide pipeline.

Another example is a plant in Freeport, Texas, which is using the system, including rupture detection, on a 12-in. liquefied ethane gas line to meet new API RP 1175 requirements for a rupture alarm independent from the leak alarm. The operators integrated the new alarm into the PipePatrol system by adding another leak pattern with a dedicated alarm.

A final example is a partnership with NuGen, in which the PipePatrol system was used by a California-based company for the Torrance Refinery pipeline network, which transports crude oil and refined products. The network includes more than 18 pipelines, from crude oil gathering lines over transport pipelines, to refinery and all connecting lines, to airport, truck loading and unloading and partner companies. The system, which can monitor everything from 400-feet lines to a 400-mile line, also includes API 1175 rupture detection.

Smart Monitoring and Protection of Pipelines

Joe Incontri is director of marketing, Americas, for KROHNE Inc., a manufacturer and supplier of solutions in industrial process instrumentation headquartered in Beverly, Massachusetts.