Telehandlers Find a Niche in Oil and Gas Midstream 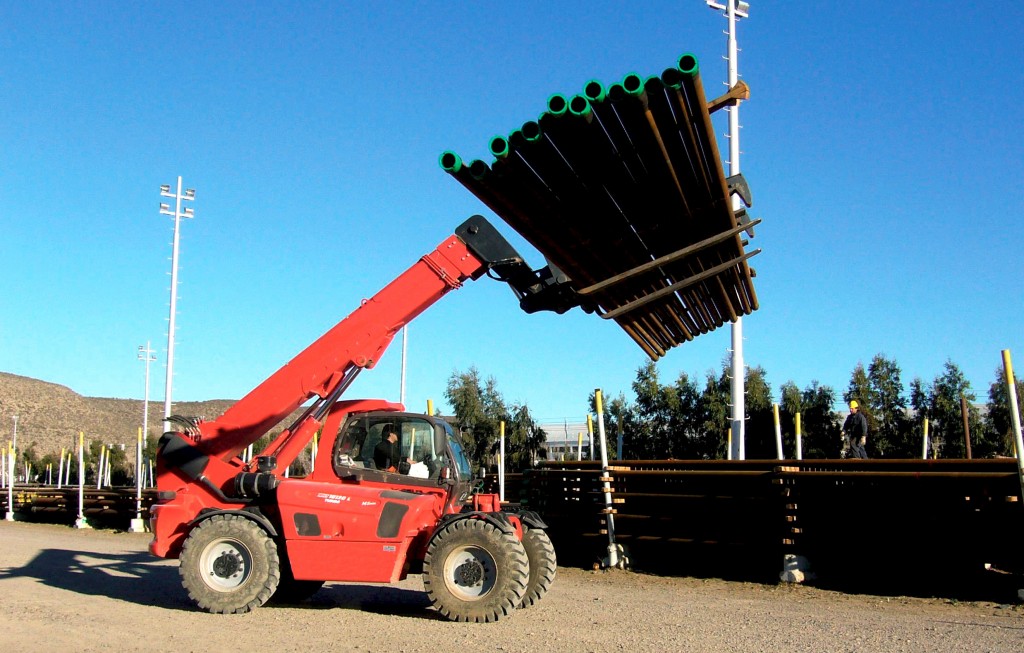 The ability to lift and haul pipe and other materials related to the midstream sector, across the yard and over rough terrain makes these four-wheeled material handlers an ideal fit for the industry. Couple that with the ability to add attachments and the telehandler quickly turns into a jack-of-all-trades on the jobsite — an important note when considering tighter budgets and a constrained work force.

RELATED: Aerial Equipment in the Oil and Gas Industry

Major players in the North American telehandler market are JLG, which makes the JLG and SkyTrak models, Genie, Manitou, Pettibone, JCB and Caterpillar. Telehandlers start around the 5,000-lb capacity range, but it’s the 10,000-lb and higher capacities that are more at home in the oil and gas world. As with any other piece of construction equipment, needs are based on the size and weight of materials to be moved.

“That size is still very popular, but at Genie we have seen a shift toward larger machines as manufacturers continue to develop new machines with this market in mind,” says Anders Mantere, Genie telehandler product manager, Terex Aerial Work Platforms. “For example, the Genie GTH-1256 and GTH- 1544 telehandler models have been our company’s latest additions in the larger size class, and they have been widely used in oil and gas industry applications. It’s not only the maximum lift capacity that is driving the change. These machines provide substantial capacity increases in outreach capacity, great visibility from a high cab, as well as smooth controls from their hydrostatic drive systems.”

“The oil and gas industry has certainly ballooned over the last five years or so, especially with fracking,” says Brian Boeckman, global product director, telehandlers, JLG. “A lot of our history is on the oil pad and then as fracking took off, we have certainly seen an increase in our business as well.” 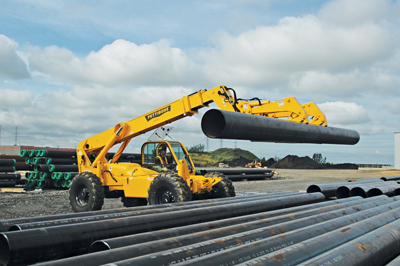 From unloading trucks to hauling pipe around the yard, telescopic handlers are a cost-effective way to augment
a contractor’s equipment fleet.

One Machine, Many Uses

That is certainly a boom that Carrollton, Ohio-based Razor Rents has witnessed first-hand. Located in the heart of Ohio’s oil and gas activity, Razor Rents has worked in the sector for three years and is a sister company to Leppo Rents, an Ohio-based rental house. Prior to forming Razor Rents, Leppo worked directly with companies in the oil patch.

“The popularity of the machines is increasing daily. They are becoming more of a useful tool,” says Jason Shankleton, manager at Razor Rents. “They have so many different functions and options that they are replacing pieces of equipment that were on the pad before.”

Shankleton adds that in the past, a contractor may have a backhoe, skid steer and excavator on the site. While a telehandler can’t dig, with the right attachments it can do the work of all three machines. “Where there would be a straight-mast forklift, a backhoe, an excavator and a skid steer, those items can be replaced,” Shackleton says. “There is a cost savings with the telehandler.” 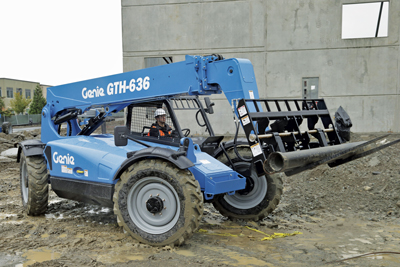 Though it can go on the right of way, in Razor Rents experience, Shankleton says that thus far most of the telehandlers are going to the well pad, compressor stations and fabrication yards “As contractors look for new methods to be more productive and move more material in a day, more and more contractors are testing telescopic handlers to see if they can answer their needs for high capacity material movement over rugged terrain,” says Steve Kiskunas, product manager for telescopic handlers, Manitou.

“The telescopic handler provides the rugged rough terrain mobility of a four-wheel-drive truck with the fully functional extended reach and placement of the telescopic material handler.”

Boeckman adds that any jobsite has obstacles and a telehandler’s ability to reach up and over those obstacles is one of the areas where the telehandler shines. Most of the telehandlers in the 10,000-lb and greater capacity range have a maximum reach of 42 to 55 ft.

Think of the telehandler as the star employee — it’s the first to work in the morning and the last to leave. A contractor can arrive at a jobsite, unload palletized material from the truck with the standard fork and carriage, unload pipe with the addition of a pipe grapple attachment and then move on to the aforementioned hauling of pipe and equipment around the yard. Because of the large meaty tires and ground clearance, the telehandler can also find its way on the right of way — even if things get a bit soupy — and play several roles with the use of attachments. 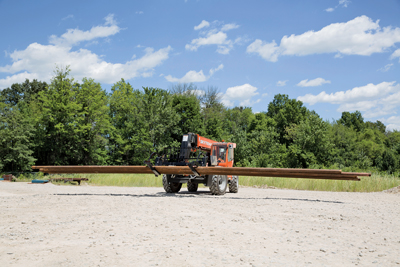 JLG, Manitou and Genie are three of the key players in the telehandler market. The equipment is typically used to haul pipe, but with the addition of certain attachments, the equipment can meet several different needs in the oil and gas midstream sector.

When the project is complete, the telehandler can load the trucks, help clean up the yard and, like that star employee, it’s the last to pack up and leave.

“A telehandler’s true value is in its multi-purpose capabilities — any contractor who needs to lift, move and/or place materials has a lot of equipment choices to choose from, and telehandlers are an ideal choice because they provide all-around utility to answer more than one work site need,” says Mantere. “For example, telehandlers are used to move jobsite materials around on site from pipes, slurry and mats to a variety of other types of equipment to keep the site productive.”

As with other construction equipment, contractors can buy or lease a telehandler; however, most in use in the industry are procured through a rental house and equipped with a standard fork and carriage. Being in the midstream sector, the ability to haul pipe is a top priority, as such most contractors also outfit the telehandler with a pipe grapple attachment. This attachment is key to safely hauling large quantities of pipe from point A to point B.

“For pipe use, a pipe handling attachment with twin arm hold-downs provides stability to the long pipe when transporting the materials,” Kiskunas says. “Also available are boom-mounted lifting hooks and high-capacity truss booms for moving materials as suspended loads.”

For oil and gas work, the telehandlers are also fitted with work lights, including a strobe or beacon light, based on safety regulations. Other attachments that work well in the sector are a variety of buckets for hauling dirt and gravel, work platforms and garbage containers.

Ease of use is one the areas in which telehandlers shine, but everyone interviewed for this story stresses that
operators must be trained, and certified, in telehandler operation per OSHA. Like the major manufacturers, Leppo and Razor Rents, as well as other rental houses, offer the required in-depth training.

“When selecting a telehandler, it’s important for contracting companies to explain the application and the specific needs of the site to their rental company reps and/or distributor sales team so that these people can help match the right machine (and attachments) to the job.,” says Mantere. “And, it is extremely important to train all of the operators who will be using the telehandler on-site — operators are the key to ensuring the machines are used properly, productively and safely.”