Most pipelines only flow in one direction, usually from an oil or gas source to a market hub. But what happens if contingencies change, with source and hub effectively switching places? Changing the flow direction of a pipeline is not a simple matter of reversing a few valves. A pipeline designed to flow in one direction needs complex restructuring in order to flow in another. It’s not an impossible task, but it does require sophisticated engineering. 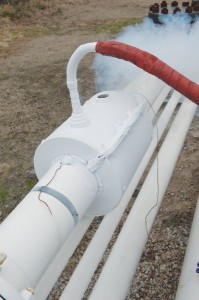 Isolation technology, such as freeze plugging, made it possible to cut, plug and safely isolate pressure from the pipeline sections without shutting them down.

This was the challenge last year for a 300-mile Gulf Coast pipeline originally designed to flow from east to west. The development of new reserves of shale oil near the western terminus, however, resulted in the need for a switch in direction from sources in the west to refineries in the east. The 22-in. pipeline has a capacity of around 360,000 barrels per day (bpd).

Reversing the flow necessitated replacing in-line valves along the entire stretch of pipeline, which primarily traverses agricultural land, crossing a number of drainage ditches, streams and rivers. In addition, there were a number of defective valves needing replacement. Due to supply constraints in the area, quick completion of the job was a high priority.

The operator called upon T.D. Williamson (TDW), a global pipeline service provider, to deliver the technical expertise and essential tools necessary to carry out the pipeline intervention and pressure isolation tasks. Previous experience with TDW gave the operator the confidence that the job could be carried out safely, with precision and in a timely manner.

Working in a variety of environmental situations across the entire length of the pipeline, the TDW team carried out approximately 30 hot tap and plugging operations to isolate pressure, so valves and piping could be replaced, and piping could be modified at several pumping stations. TDW used its proven Stopple pipeline pressure intervention method to achieve isolation at each of the sites requiring attention. Freeze plugging technology was also used, where appropriate. These techniques make it possible to cut, plug and safely isolate pressure from the sections without shutting them down, which would have resulted in disruption to flow. It also means that a great deal of time is saved, in what would otherwise be a very time-consuming operation.

The contractor and pipeline operator were working to a very tight schedule. In order to respond effectively to these needs, TDW mobilized a large team of technicians who worked seven days a week for the entire four-month duration of the project.

Although all interventions were carried out onshore, traveling to each of the worksites with the full complement of equipment proved challenging, especially when work was being carried out, simultaneously, at separate locations. In fact, two of the interventions required personnel to cross a waterway via tugboat and barge to access the worksite. Regardless, the operation, from deployment to final intervention, was completed by TDW well within the timeframe stipulated by the operator.

The reversed flow pipeline went back online allowing the operator to respond effectively to a supply bottleneck that had developed in the area. TDW was pleased to be able to respond so effectively to the customer’s needs, safely completing a complicated and challenging job on time and with minimal impact on the environment.

“Our customer provided us with an exciting challenge that we knew we could complete to their satisfaction,” said ­­­­­­­­­­­­Randy Miley, Baton Rouge service center manager for TDW. “Reversing a pipeline’s flow direction is always complicated. In this case, it was made more so due to the length of the line, the variety of conditions in which we had to work and the necessity for speedy completion. Nevertheless, the combination of strong communication, TDW project management expertise and cutting edge technology guaranteed the operator’s success.”