... The Role of Supply Houses in the Age of Fracking

The Role of Supply Houses in the Age of Fracking 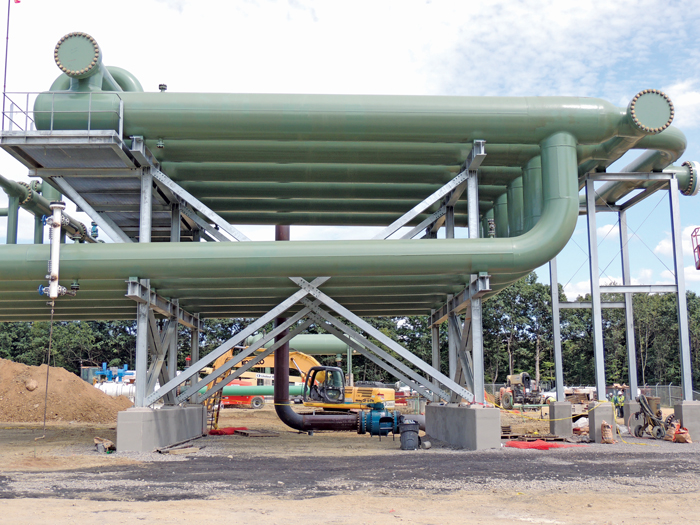 The energy industry has seen a boom beyond expectations as companies actively work to harness the resources from the Utica and Marcellus shale formations in the East and Midwest. The unprecedented growth comes at the same time as controversy increases over the extraction process — hydraulic fracturing or fracking in which water combined with sand and chemicals is injected below the surface at high pressure to extract oil and gas. Environmental groups, who argue that fracking places the public at risk due to the possibility of long-term contamination of water and soil, have intensified their efforts to stop drilling.

Although the targets of the protests are mostly energy companies, the controversy has not escaped the attention of pipe, valve and fitting manufacturers, especially their distributors and supply houses. They too want to reassure their customers — their end user — that the products have been manufactured to meet the standards required for such high-pressure drilling. The supply houses have recognized that they, too, must do their utmost to assure that potential catastrophic accidents because of a pipe or fitting deficiencies will not occur.

But that’s not the only issue facing supply houses. Demand has forced them to meet the unusually quick response times demanded by their customers.

Meeting End-User Demands
Technology has radically changed the drilling process and it has also been the catalyst for significantly improving delivery times. That should come as good news for operators focused on equipment availability. The increase in drilling operations to a nearly unprecedented degree because of the shale boom in the Northeast and Midwest has put the onus on supply houses to improve delivery times while maintaining records of product quality that will ensure safe operations. Advancement of software platforms has improved logistics and process changes for manufacturing and has enabled supply houses to expedite delivery.

The explosive growth of gas and oil exploration has caused customers to take an even closer and more analytical look at manufacturers and the ability of their products to meet the demands of drilling operations. Each company has what may best be described as various nuances in methods and technology. These too must undergo the scrutiny of energy drillers that view each operation as a relatively small window of opportunity.

The reality is that end users want more from supply houses, particularly in quality assurance of pipe, valves and fittings. To meet and even exceed that expectation, manufacturers have relied on technology to quickly turn around configurations and different yields. Quick turnarounds are also essential for rapidly changing material demands. Manufacturers have no choice. They have to upgrade their logistical processes to streamline specialty jobs in quick fashion. They and the supply houses know all too well that energy drillers will accept nothing less than a fast response because the drillers have a short time frame to meet their customers’ needs. After all, the drillers want to get in the ground and just as rapidly, get the oil or gas to their customers. Delays due to supply logjams are costly and it will not take much for an end user to seek other sources of supply if quality and delivery fall short.

R. Allen Hodge, professional engineer and president of Hodge Construction, a New Waterford, Ohio, commercial construction company and industrial contractor, says companies like his have had to adjust to the demands for a quicker response time. “Our industrial customers prior to the natural gas boom could expect delivery of typical fabrications in one-to-three months from order, but now we are expected to turn around typical fabrications in as little as four weeks and often sooner,” Hodge says. “If you don’t react, the customer will find someone who can to a point.”
Hodge says that supply houses had been forced to “play catch-up” for several years when shale burst on the scene in Northeast Ohio, which contains Marcellus and Utica shale beds and has become a hotbed of energy activity. “Many drillers, midstream and processing companies have material clauses that limited material supplies, but now that’s changed. Over the last year, material suppliers have caught up with demand and reasonable lead times are now attainable.”

Infrastructure requirements, particularly for drilling in the Utica Shale, can often pose challenges. Launchers, receivers and compressors are all part of the midstream component and necessary for the end user, but are not always there when needed.

Energy companies have always wanted to deal primarily with manufacturers who have a very stringent and proven quality control process in place, especially now given the heightened focus on the safety of the hydraulic fracturing process and the concurrent allegations of potential harm to the environment. Operators rightly insist upon documentation and substantial record-keeping that the components they plan to use meet the pressure requirements of the installation. For fracking, those requirements can be substantial. Equally important is the supply house’s history of reliability, which companies use as a barometer based on past performance. Drillers basically insist upon two standards for piping and fitting delivered by their supply houses: defect free and rapid delivery.

Mill Test Reports (MTRs) and Traceability
Mill Test Reports (MTRs) are vital for understanding the composition of every component in a pipe, valve or fitting, which explains why considerable sums of money and effort have been spent over the years in refining them. MTRs define the material’s origin, its tensile strength and varying chemical composition. Sometimes, though, the accuracy of the MTR may be difficult to maintain or verify. One reason is that when a part has undergone different stages in the process, i.e. milled, forged or casted, it has traveled through multiple hands. Documentation may be lacking during each step of the component delivery. That may well be a red-flag for the end user.

Heat codes assigned with each material run are included in the MTRs and are either stenciled or engraved in the fitting. Presumably that should be enough information for the end user to know the chemical composition of the part and whether it is capable of performing the task. MTRs that are either lost or somehow separated from the part make identification via the heat code difficult if not impossible.

“Practically all players in this industry, particularly material suppliers, understand the importance of traceability and have procedures of checks and balances to assure it doesn’t become an issue,” said Allen Hodge, the construction executive and industrial contractor, “but at times some fabrications cannot be traced even though it is required and those fabrications have to be rejected on those grounds.”

These are problems that can create considerable and unacceptable expenses because of their potential to delay drilling operations. When fabrications lack documentation, operators must order replacement parts and the project could experience delays. Here, though, is where technology platforms have improved the ability to trace the trail of the pipe, fitting or vale, its modifications and composition. Software aligns the heat code with the MTR and electronically transmits it to the end user eliminating any potential problems with traceability. The MTR stays current, the end user has an accurate depiction of the part and its capabilities and delivery has been expedited.

As the need for products to support the massive effort for gas and oil extraction from shale deposits increases, so do the demands for a more streamlined process, verifiable documentation and quicker turnaround times. At the same time, the need for a faster delivery system cannot eliminate the paramount importance of providing accurate and up-to-date MTRs assuring that pipe, fittings and valves are capable of performing and responding to the stress of hydraulic fracturing.

Quality and documentation have to be assured at every step of the process. Supply houses can use the newer technology to document parts and meet the standards set by the industry and governmental regulations. With so much scrutiny placed on the safety of shale drilling, manufacturers, supply houses and other distributors should leave no room for error in either quality control or documentation, which is why the newer platforms can play an important role.

Too much is at stake.

Dennis Roberts is general manager of Northeast operations, based in Akron, Ohio, for the Macomb Group Inc. Headquartered in Sterling Heights, Mich., Macomb Group is a wholesale distributor of pipe, valves and fittings (PVF). For further information, call (888) 756-4110 or visit www.macombgroup.com.