With oil and gas prices down by half from their recent highs, operations managers and corrosion engineers are finding that one of the best ways to cut costs and survive the downturn is to eliminate the ongoing costs associated with corrosion control on in-service structures made of carbon steel.

According to the NACE International report, “Corrosion Costs and Preventive Strategies in the United States,” for gas and liquid transmission pipelines alone “the average annual corrosion-related cost is estimated at $7 billion to monitor, replace and maintain these assets.” This figure quickly multiplies when lost revenue, productivity and spill or leak cleanup costs are tallied — a hit to the bottom line that the industry struggles to endure when oil and gas prices are low.

From upstream transit containers, to midstream product transport, storage and processing, to downstream refining, the challenge has long been to control corrosion on carbon steel service structures. Traditionally, polymer paints and rubber type coatings have been used as physical barriers to keep corrosion promoters such as water and oxygen away from steel substrates. This works until the paint is scratched, chipped or breached and corrosion promoters enter the gap between the substrate and coating.

Then the coating can act like a greenhouse — trapping water, oxygen and other corrosion promoters — which allows the corrosion to spread. For this reason, such coatings are often reapplied every 3-7 years, depending on factors such as rainfall, humidity and proximity to a marine environment. While stainless steel can be used for tanks or other high-value equipment to resist corrosion, it can be up to six times more costly than carbon steel, as well as challenging to weld, fabricate and maintain.

Now a new generation of anti-corrosion coating, called chemically bonded phosphate ceramics, is poised to cost-effectively stop such corrosion, improve safety and extend tank, pipeline and equipment life in the oil and gas industry while minimizing maintenance and downtime.

Offshore Corrosion Protection and Beyond

With total assets and annual sales revenue of more than 10 billion Chinese yuan ($1.5 billion USD), the Energy Development LLC of China National Offshore Oil Corp. (EDC of CNOOC) sought to protect its offshore platform transit containers fom corrosion. But because of year-round exposure to marine conditions, as well as severe collisions due to repeated hoisting and transport, traditional coatings failed rapidly after being put into service. In addition, such coatings had other drawbacks during application. They inefficiently required multiple coats, were toxic, flammable and emitted VOCs.

To address these issues, the company turned to EonCoat, a spray applied inorganic coating from the Raleigh, North Carolina-based company of the same name. EonCoat represents a new category of tough, chemically bonded phosphate ceramics (CBPCs) that can stop corrosion, ease application and reduce production downtime.
In contrast to traditional polymer coatings that sit on top of the substrate, the corrosion resistant CBPC coating bonds through a chemical reaction with the substrate and slight surface oxidation actually improves the reaction. An alloy layer is formed. This makes it impossible for corrosion promoters like oxygen and humidity to get behind the coating the way they can with ordinary paints. 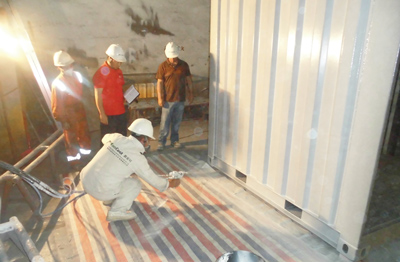 Although traditional polymer coatings mechanically bond to substrates that have been extensively prepared, if gouged, moisture and oxygen will migrate under the coating’s film from all sides of the gouge.

By contrast, the same damage to the ceramic coated substrate will not spread corrosion in oil and gas facilities because the carbon steel’s surface is turned into an alloy of stable oxides. Once the steel’s surface is stable (the way noble metals like gold and silver are stable) it will no longer react with the environment and cannot corrode.
Visible in scanning electron microscope photography, EonCoat does not leave a gap between the steel and the coating because the bond is chemical rather than mechanical. Since there is no gap, even if moisture was to get through to the steel due to a gouge, there is nowhere for the moisture to travel, which effectively stops corrosion in upstream, midstream and downstream applications.

The corrosion barrier is covered by a ceramic shell that resists corrosion, fire, water, abrasion, impact, chemicals and temperatures up to 400 F. Beyond this, the ceramic shell serves a unique role that helps to end the costly maintenance cycle of replacing typical barrier type coatings every few years.

“If the ceramic shell and alloy layer is ever breached, the ceramic shell acts as a reservoir of phosphate to continually realloy the steel,” explains Merrick Alpert, president of EonCoat. “This self-heals the breach, depending on its size, and stops the corrosion if necessary. This capability, along with the coating’s other properties, enables effective corrosion protection for the life of in-service structures with a single application.”

For such corrosion protection, Wuhan Hengshi Engineering LLC spray applied EonCoat to 38 containers that were put into service for EDC of CNOOC, covering about 1,837 square meters (19,773 sq. ft) total. Over three years later the containers indicate excellent corrosion protection, except for a few areas of coating fall-out due to container collision. These areas were quickly repaired and the units put back into service.

“When equipment like containers are roughly handled to the point where the steel and surrounding CBPC coating are damaged, the coating can typically be repaired by simply spraying a new layer of EonCoat over the old one, provided any chipped edge is abraded to a smooth transition,” says Alpert. “Because of this, equipment can be returned to service in a matter of hours if the company has the spray equipment onsite.”

Such coatings consist of two non-hazardous components that do not interact until applied by a standard industrial plural spray system like those commonly used to apply polyurethane foam or polyurea coatings. Since CBPC coatings are inorganic and non-toxic, there are no VOCs, no HAPs and no odor. This means the non-flammable coatings can be applied safely even in confined spaces.

One of the greatest benefits, however, is quick return to service that minimizes facility downtime. The time saved on an anti-corrosion coating project with the ceramic coating comes both from simplified surface preparation and expedited curing time. With a typical corrosion coating, near white metal blast cleaning (NACE 2 / SSPC-SP 10) is required to prepare the surface. But with the ceramic coating, only a NACE 3 / SSPC-SP 6 commercial blast cleaning is typically necessary.

For corrosion protection projects using typical polymer paints such as polyurethanes or epoxies, the cure time may be days or weeks before the next coat of traditional three-part systems can be applied, depending on the product. The cure time is necessary to allow each coat to achieve its full properties, even though it may feel dry to the touch.

With traditional coatings, extensive surface preparation is required and done a little at a time to avoid surface oxidation, commonly known as “flash rust,” which can require re-blasting.

“Typically you need to keep an SP 10 throughout the entire blast operation, cleaning operation and painting operation with traditional coatings,” says Wesley Newburn, a Quality Control Manager for Mobley Industrial Services, a multi-service specialty contractor serving the chemical, petrochemical and refining industries. “You may need to rent D-H equipment because humidity above 60 percent will oxidize the surface and require re-blasting.”

In contrast, a corrosion resistant coating for carbon steel using the ceramic coating in a single coat requires almost no curing time. Return to service can be achieved in as little as one hour. This kind of speed in getting an asset producing again can potentially save hundreds of thousands of dollars per day in reduced downtime in oil and gas applications.

“Perhaps the biggest advantage with EonCoat is that there’s no worry about surface prep,” says Newburn. “You can blast the entire surface, then coat it without concern over losing an acceptable blast. There’s no need for D-H equipment because the ceramic coating can be applied when it’s wet or humid. A little surface oxidation makes it adhere better.”

According to Newburn, hydrocarbons are the number one cause of coating delamination at petrochemical facilities. To avoid coating delamination at refineries with traditional coatings, all hydrocarbons such as oil and grease must be found by black light methods, then removed by chloriding until black light passes. This is not required with the ceramic coating because it will not adhere to hydrocarbons, so on surfaces that are not clean the coating will “bubble” on the poorly prepared substrate.

“You can immediately identify and correct poor surface prep during application,” concludes Newburn. “For quality assurance, you can also take the coating’s dry film thickness as early as 15 minutes after application at 75 F. That means the coating can be performed and corrected at the same time, which makes work quicker and gives a more predictable outcome.”

Del Williams is a technical writer based in Torrance, California. He writes about health, business, technology and educational issues.