Gas dehydration is a critical function in the production and transmission of natural gas. The removal of water from produced natural gas streams reduces the risk of hydrate formation and reduces the potential for corrosion in pipelines and downstream vessels

Glycol formulations are often encountered as liquid desiccants in gas dehydration applications. Introduction of produced water to a glycol dehydration unit will inevitably bring with it dissolved mineral salts such as calcium chloride and sodium chloride. As salt concentrations increase — a common situation for dehydrators in service for gas storage fields — they reach a solubility limit in triethylene glycol (TEG) and create scale in the dehydration unit.

The end result of excessive salt contamination is equipment fouling, plugging of filters and exchangers and shutdown of the dehydration unit. In addition to lost production, the unit shutdown may also include the replacement cost the complete TEG inventory.

The lack of solubility is even more pronounced when water is removed from TEG. A wet glycol stream will still display the reverse solubility profile, but the addition of water will allow for improved sodium chloride solubility as shown in the far right curve of Figure 1.

Regeneration of TEG in a dehydration unit occurs at temperatures that exceed 375 F and results in a lean glycol stream, which will typically contain between 0.5 and 1.5 percent water by mass. The end result of this low water/high temperature condition is precipitation of sodium chloride salts in the glycol reboiler. Some of these solids will circulate to cause plugging of filters and heat exchangers, but a portion of the salts will precipitate on the reboiler tubes or bundles.

The solids in the reboiler will limit heat transfer away from the reboiler tubes and can cause tube failure in extreme conditions. These events can begin to occur at chloride concentrations as low as 1,200 parts per million (ppm). Calcium chloride is also encountered in gas streams but displays a traditional solubility profile in TEG where raising the solution temperature results in higher solubility. As a result, calcium chloride deposits can appear at cold spots in the system and in extreme cases of salt contamination there is potential for salt precipitation in both the glycol reboiler and the glycol absorber. 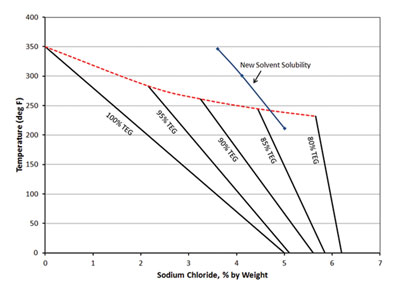 An initial trial partner was identified at a gas storage and extraction facility in the northern United States. The location had a history of chloride contamination as the gas was stored in an underground salt cavern where produced and free water from the cavern would dissolve mineral salts.

Introduction of the salts in the wet natural gas to the dehydration unit caused shutdowns during the extraction season. The new solvent was installed in the early fall prior to the winter heating season. The initial phase of the trial was important to validate dehydration
performance — a straightforward yet critical characteristic for a gas dehydration product. 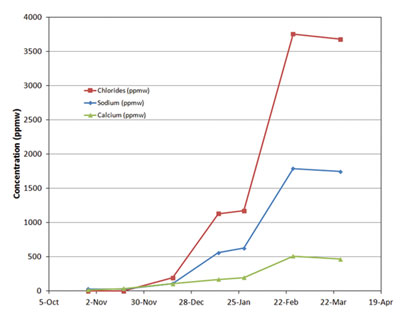 Following this successful validation, history proved to an accurate predictor of salt incursion as both sodium and calcium chlorides salts appeared in the solution analyses throughout the extraction season (Figure 2).

Multiple surges of salt containing water entered the dehydration unit during the extraction season resulting in a final chloride concentration approaching 4,000 ppm by weight. The dehydration unit ran without interruption during the entire extraction period and solids did not appear in the samples provided for analysis. As proof of complete solubility, end of season inspections found no deposits on the reboiler tubes or on column internals.

The chloride solubility issues were addressed but chloride induced corrosion remained a concern for the system. Corrosion was monitored by placement of mild steel corrosion coupons in both the lean and rich fluid streams. The initial coupons were placed at the beginning of the product trial and replaced in the first week of February after approximately 90 days of exposure.

The second set of corrosion coupons were removed from the system during the final day of operation in April. Each pair of coupons showed minimal weight loss and a calculated corrosion rate of less than 1.0 mil per year (1 mil = 1/1,000 of an inch). The second set were exposed to elevated chloride levels and still showed a very low corrosion rate.

The corrosion resistance is partly due to the fact that the new formulation included a package of corrosion inhibitors to protect the system from corrosion and stabilize glycol pH. Figure 3 shows the pH stability of the new glycol formulation during the trial period. Although a slight decrease in pH is observed, the pH remained in ideal ranges throughout the trial without additional chemicals.

Another feature of the salt tolerant solvent was that filter changes were completely eliminated during the trial period. Previous year’s records indicated multiple changes to the particle filters installed at the facility, often occurring multiple times in one week. During the trial period with the new solvent, pressure drop across the particle filters was consistent and zero filter changes were needed.

The new salt tolerant dehydration solvent — branded by Dow as Norkool DESITHERM HS — has proved an effective solvent for gas dehydration and for keeping chloride salts in solution and off the surfaces of process equipment. During field trial the solvent proved capable of handling salt incursions to the dehydration unit without formation of solids and, most importantly, without causing shutdown of the dehydration unit for cleaning and solvent replacement.

Eric J. Klinker is a technical service and applications development chemist for Dow’s Oil, Gas and Mining division and can be contacted at ejklinker@dow.com.

Christophe Laroche is an associate scientist for the refining and processing segment in Dow’s Oil, Gas and Mining division and can be contacted at claroche@dow.com.

Chuck Martin is an associate director for oilfield production and gas transmission in Dow’s Oil, Gas and Mining division and can be contacted at ch.martin@dow.com.