Long before Houston, North Dakota and the Marcellus-Utica shale region became synonymous with the U.S. oil and gas industry, Tulsa, Oklahoma, reigned supreme. For the last 70 years through boom cycles and slower times, one club has stood as the cornerstone of promoting the industry and that is the Pipe Liners Club of Tulsa.

Formed in 1947, the club is likely the oldest such organization in the country, and its main focus remains promoting the safe and reliable transport of hydrocarbons and attracting people to this industry.
The latter of which is much-needed for a region that felt the change as Houston, Texas, grew to be the prominent oil capital of North America in the 1980s.

Terry Flynn, chairman of the club’s Communication, Media, Marketing and Website Committee, notes that even as some companies pulled up their roots and left for Houston or shut their doors during the 1980s oil bust, there were still many die-hard Tulsans that refused to relinquish the “Oil Capital of the World” title.
“We have a multitude of manufacturers, service companies, contractors and operators that have thrived in Tulsa, and we are still one of the top, heavy hitters,” Flynn says, adding that it is the employees at those companies who comprise the club’s membership. “We take tremendous pride in being the oldest pipeliners club. And Tulsa, as a city, has a rich history in the oil and gas industry, and we as locals take that seriously as well.” 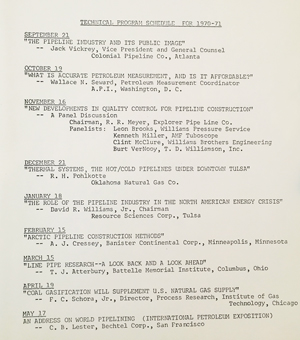 Pay close attention to the subjects in these notes from club meetings from 1970 and 1971. Many of the topics are still relevant, if not more so, today.

The Pipe Liners Club of Tulsa came together as five founding members realized a need for formal, structured organization that would address — both to its membership and the public as whole — continuing education, best practices, development and installation of pipelines as the region’s oil and gas industry boomed.

Flynn notes, looking at an old meeting agenda that many of the issues that the founding members faced are still relevant — if not more so — in today’s climate.

“One of our meeting presentations from 1950 is titled ‘Public Attitude Toward Pipe Lines,’ and there is another topic from 1970 ‘The Pipeline Industry and Its Public Image.’ We as an Industry have to sway the perception of pipelines being bad environmentally to pipelines being the safest mode of transportation for oil and natural gas,” he says. “This issue has been going since day one of the club and it is ongoing. We all have to work together to publicly educate everyone about the safety of this type of delivery.”

From those five founding members, the club’s roster now numbers more than 650 active members and its monthly networking dinner meetings routinely draw more than 200 making the club a valuable resource to promote the industry. This isn’t lost on Trey Hamra, the club’s vice president.

“The purpose of the Pipe Liners Club, as we have it written in our articles, shall be the advancement of the pipeline engineering, maintenance and operating practices for the mutual benefit of the members and the industry,” he says. “Coming from the supplier side of the business, I have received multiple bids or jobs and projects that, had I not been involved in the club, I would have never had those opportunities. We are all here to help each other. There are multiple people I know whose day-to-day jobs have benefited from attending and networking at a Pipe Liners Club meeting.”

Club president Mike Sanders, P.E., notes that the club is collective of individuals, from varied backgrounds, who despite being competitors, are all on the same team. “We all want the best and safest products and projects in the energy sector,” he says.

In addition to the day-to-day business benefits for members that comes from networking, since 1956, the club has provided another valuable benefit and that is its scholarship program. That first year, the club distributed one $350 scholarship to a University of Tulsa student. Today, the club distributes on average of $150,000 a year in scholarships to more than 50 applicants. To be eligible, an applicant must be sponsored by an active club member who has attended at least four club meetings or events. Though the applicant does not need to obtain a degree in an oil and gas-related field Hamra notes that there is some weight placed on those who do.

Sanders, was initially wooed to the Pipe Liners Club of Tulsa because of its scholarship program. That and the fact that he was relatively new to the oil and gas sector coming to it from the power generation industry.

“I still wasn’t really involved with that [oil and gas] market segment. The club secretary at that time was a long time friend of mine, and knowing that I had a daughter that would be going off to college soon, invited me to join the Pipe Liners Club of Tulsa so that I would qualify to get her a scholarship, and pick up a few professional development hours (PDHs) along the way,” Sanders says. “Once I attended a few meetings, and found the group had a very diversified experience that they were willing to share, I was thrilled to not only attend, but to share my experiences as well.”

On the scholarship side, club history is being made with the current roster of club officers. For the first time, an officer is also a past scholarship recipient. That member is Taylor Lagorin, a two-time scholarship recipient and the club’s secretary. He works at Resolute Engineering and his father Wayne Lagorin, president and CEO of Resolute Engineering, is an active member in the club and sponsored his son. Because of the way the club is organized, Taylor will serve a year as secretary, one as treasurer and one as vice president, before becoming the club’s president.

“We have had many stay in the industry, but Taylor is the first one to come back through and volunteer with club,” Flynn says. “He heavily promotes that fact, and I think he has instilled that same idea into some of our recent recipients. I foresee that this will now grow in numbers.”

Hamra adds, “I agree. In the near future, as the guard changes and our members that are 60 years and older retire, we will have a new younger group coming up and many will be scholarship recipients.”

Hamra, who is 37 and whose family has a history in the oil and gas industry, began his volunteering with the club six years ago helping to create its young professionals group. Unlike other young professionals’ groups in the industry, the Pipe Liners Club of Tulsa group is based on years in the industry and not age.
“If you have been in the industry less than five years, but you are 50 year old, you are considered a young professional in the club’s eyes,” Hamra says. “We are doing everything we can to get them together and network and be more involved in the club and spend more time recruiting new members who are younger.”
The plan worked as both Hamra and Flynn agree that the demographic at the monthly meetings is changing. Recently, the club began working with the University of Tulsa on the creation of a midstream group at the university. Members of that group can attend the club’s events at a reduced rate, so they can begin networking before graduation. The hope is that more graduates, not just at the University of Tulsa, but other area colleges and technical schools stay in the Tulsa area following graduation. 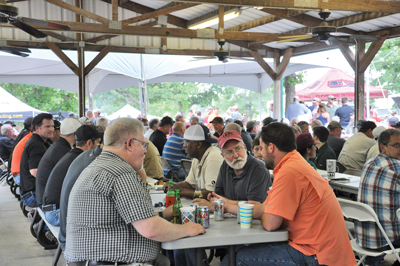 In addition to its monthly meetings, the club hosts two clay shoots, two golf outings, a fishing tournament and the annual Christmas party.

Educational meetings, networking, the young professionals group and scholarship help bring members to the club, but as the industry gets younger and those with the most experience retire an educational gap forms. That club recent began sponsoring an initiative — Tulsa Pipeline College – that hopes to fill that gap.
“For several years, Butch Webb, our oldest active member, has been eager to create a program where the older crowd retiring from the industry can pass their knowledge to the younger generation,” Flynn says. “He and several of our other older members have agreed to lead classes covering different segments of the pipeline sector. He has about a dozen classes available at no charge to any member. The goal is to educate all members about the various segments.”

Attendees earn PDHs while at the same time picking up this field-tested knowledge from the previous generation of pipeliners.

“We are in this to help the industry as a whole because, the pipeline industry is heavily scrutinized by a lot of people with short-sighted vision who do not realize that about 80 percent of their lifestyle involves some sort of a hydrocarbon,” Hamra says. “Whether it be the socks on their feet or the cell phone in their hand, there had to be a hydrocarbon transported at some point. Part of our goal as a club is to raise awareness and let people understand that pipelines are the safest way to transport hydrocarbons all over the world.”

Pipeliners Clubs Across the United States

The Pipe Liners Club of Tulsa holds the distinction of being the oldest club in the United States. Below is a list of the other U.S. clubs and the year the clubs were formed. Though the clubs are not affiliated, the leadership at the Pipe Liners Club of Tulsa encourages members of the industry to get involved with their
local group to help advance the industry and spread the message that pipelines are the safest and most reliable mode of hydrocarbon transportation.