... Weld Quality of Risers, Fatigue-Critical and CRA-Clad pipes and Curved Pipes and Manifolds

OMS WeldChecker Aids Oil and Gas Companies in Verifying the Weld Quality of Risers, Fatigue-Critical and CRA-Clad pipes and Curved Pipes and Manifolds 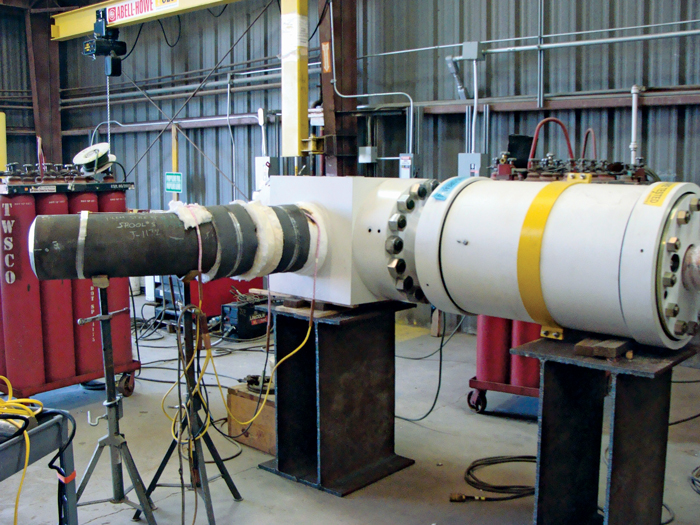 The integrity of a weld is one of the most critical aspects of a pipeline. However, there are many characteristics of modern pipelines that pose a challenge to the welding process. Corrosion protection and tight bends in pipelines are just a few of the factors that may inhibit the quality of a weld. Optical Metrology Services Ltd. (OMS) has developed an internal inspection tool that helps oil and gas companies verify the welds on a pipeline and related infrastructure, regardless of these challenges.

The OMS WeldChecker system comprises a high-resolution digital video camera for video inspection and a laser scanner to gather pipe geometry across the inner wall of the pipe nearest to the weld and across the entire weld. This is critical during pre-qualification tests (PQT) in order to qualify the welding process, equipment and staff for the project. This not only allows the client to develop its process and to fully understand the welding parameters, but also enables them to demonstrate to their customer an unrivalled level of weld information and to show full compliance with stringent pipeline specifications.

One of the limiting factors in the lifespan of a pipeline is corrosion. Corrosion-resistant alloy (CRA) clad pipe is becoming increasingly important in preventing corrosion. The welding process is critical to the successful fabrication of CRA clad pipes and consequently the ability for the pipeline owner to extend the life of their pipeline. However, the welding process itself is very challenging.

Prior to the development of the OMS WeldChecker internal weld inspection system, methods of examining the quality of internal welds in detail, from both a visual and a measurement perspective, have been inadequate and unreliable. A considerable gap has existed in the technology available for measuring the critical features of CRA welds such as Hi-Lo (joint misalignment), weld height, width and lack of penetration or fusion. 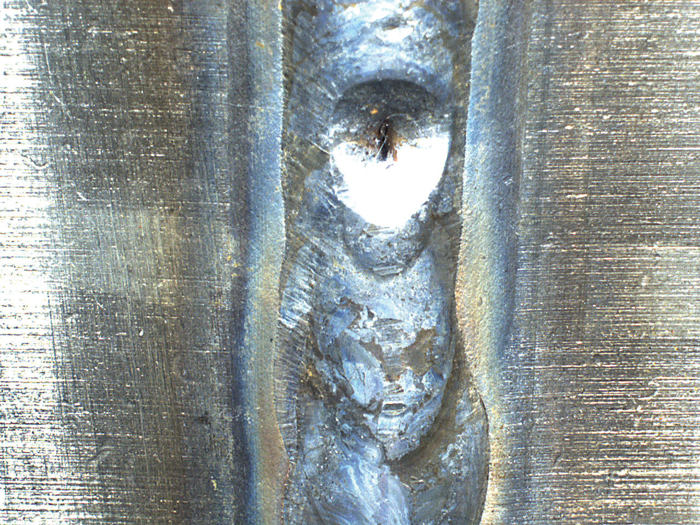 The best time to check a welded joint is after the second pass. If a flaw is found in the root weld, it canbe cut out then and there.

The ability to give closure on tough decisions regularly encountered by the welding inspector could prove invaluable in saving time, while also ensuring only the highest quality welds are accepted, leading to longer lifespan. The decision of when to use WeldChecker is also an important factor — timing is critical in order to maximise the benefits of the system. Video-only inspection tends to raise as many questions as it answers, often meaning that pipe joints need to be cut out to mitigate any risks, even if they turn out to be acceptable upon closer inspection later.

Ultrasonic testing, although very detailed, can only be performed after the weld has been completed. There will have been multiple weld passes before finishing the cap of the weld — and this means that if a flaw is found, many hours of work may have already been wasted. The OMS WeldChecker is best placed to inspect after the second pass. If there is a flaw in the root weld, it can be cut out at this point — saving time and money.

Another technical challenge is the ability to inspect welds around curved pipes. Many of OMS’ clients use CRA materials on subsea structures, such as Pipeline End Terminators (PLETs) and Pipeline End Manifolds (PLEMs). These structures tend to have very tight bends, as little as 1D (1 x diameter) on occasion. Listening to our clients and assessing the lack of technology in this area, OMS has designed and produced a new version of the WeldChecker, which has the same design concept as a London “bendy-bus” with a modular, flexible design. The advance in hardware has driven the capability forward, allowing previously inaccessible welds to be measured for compliance — guaranteeing they meet the client’s specification.

Taking this technology to the next level, OMS has developed more compact tools that are able to fit inside ever-smaller pipe diameters. The capability is now at just 4 in. internal diameter, making OMS one of the only companies in the world that can inspect welds using both laser measurement and visual data at approximately 100-mm diameter and around bends in pipes. OMS WeldChecker has been successfully deployed in a number of well-known oil and gas projects around the world, such as BP’s Devenick, Skarv and Galapagos projects, as well as Shell projects Gumusut, Llano and Cardamom.

Where will internal weld scanning technology go from here? OMS is currently looking at the application of this technology to a number of different situations. One application is to mount the tool to the lineup clamps for use in the critical welding path both onshore and offshore during pipeline welding. Another application is the inspection of tie-in welds on welded spooled stalks of pipe — this means while these pipes are spooled onto the vessel, the WeldChecker would be driven by crawler perhaps 1 km to perform the weld scan. Finally, it could be used on older pipes and structures to measure the extent of corrosion or pitting, or perhaps to measure the extent of features in the pipe wall.

The OMS WeldChecker has also seen significant interest from the oil and gas industry, as well as interest from the aerospace and nuclear sectors. Large operators are now asking for tighter tolerances to maximise production life, and also to make the pipelines safer through better welds. OMS provides the solution for both operators and welders — seen, measured, quantified and approved.

Hugh Davies is director of client solutions at Optical Metrology Services (OMS). Contact him at hugh.davies@omsmeasure.com.