The need to regulate safety is a given in any industry, but this is especially true when working in oil and gas applications. Whether the challenge is dealing with extreme temperatures and pressures, avoiding the ignition of flammable substances or taking proper precautions when operating specialized machinery, everyone involved is naturally more inclined to err on the side of caution.

Though many tend to focus on the upstream and midstream sectors when discussing the generalities of oil and gas safety, industry professionals know that safety is just as critical when constructing infrastructure or while conducting many of the support tasks that happen far away from the drilling site or pipeline.

One such support task is simply getting the appropriate equipment or materials to the jobsite using dedicated material handling equipment. This seems basic enough — but due to the sheer size, weight and quantity of the various items that need to be moved or transported, safety absolutely must be kept at the forefront of any discussion involving material handling for the oil and gas industry.

One common handling application is moving and placing heavy pipe. Over the years, equipment manufacturers have developed a multitude of solutions for this task to cover everything from moving pipe around stockyards, to shipping pipe hundreds of kilometers, to placing it during the actual construction of a pipeline.

However, not all of these solutions were originally conceived with this exact application in mind. For example, the wheel loader is a highly versatile machine that can be equipped with a multitude of attachments to tackle many different jobs, including fork and grapple attachments for lifting pipe. But despite its secondary functionality, a wheel loader is primarily designed to dig and move dirt. As a result, users have to compromise on certain performance characteristics when using it as a pipe handler.

On the other hand, there are dedicated pieces of equipment, such as rough terrain forklifts, that are engineered specifically for material handling applications like lifting and placing pipe. These types of purpose-built machines offer a number of design features that can contribute to accomplishing these tasks in a safer and more efficient manner. 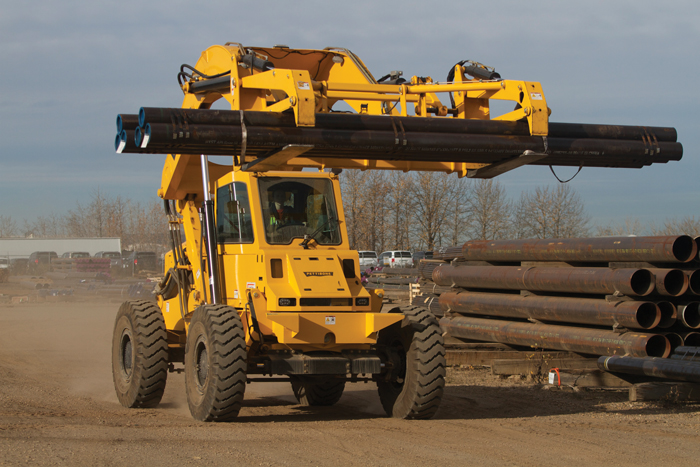 When lifting, placing or transporting loads, dedicated pipe-moving vehicles with overhead lift arms give the operator much better forward visibility with no obstruction, which can prove quite advantageous when precision load placement is a must.

The fact that the length of a pipe is typically greater than the width of the machine carrying it immediately makes it an awkward item to move, since operators are automatically put into a situation where the material they are handling falls outside the footprint of the vehicle they are driving. In order to maneuver safely, it becomes vital to have as much visibility as possible around the vehicle.

When moving pipe through stocking yards, drivers are constantly moving up and down narrow aisleways — usually no more than 30 to 35 ft wide — and are sometimes stacking pipe as high as 10 to 12 ft. Loading the pipe and transporting it around the yard without incident is a situation that generally requires the machine to be driven while its load is lifted up in the air.

With a wheel loader, operators experience at least some degree of obstructed visibility under these circumstances, since the lift arms of the vehicle are located directly in front of them.

A safer design found on some dedicated pipe-moving vehicles — such as Pettibone’s Cary-Lift product line — incorporates overhead lift arms that are mounted behind the cab instead of on the front of the machine. When lifting, placing or transporting loads, this design gives the operator much better forward visibility with no obstruction, which can prove quite advantageous when precision load placement is a must.

Of course, when it comes to material handling, rear view visibility is also a critical factor, especially when working in tight quarters either in a stockyard or out in the field.

Equipment manufacturers across several product lines and industries have increasingly worked to streamline the body styles of their machines to provide more all-around visibility. Sloped engine compartments and other enhancements help to keep more lines of sight clear for the operator around an entire vehicle.

For good measure, optional back-up cameras and even front-facing cameras are often available to provide an additional level of safety for machines that are constantly shifting and cha-nging direction during use. High output LED lighting is another fairly recent improvement that is now often a standard feature on many machines. LED lights provide the double benefit of increasing light output while requiring less electricity than older style light systems. By better illuminating the jobsite, these lights naturally contribute to creating a safer work environment. 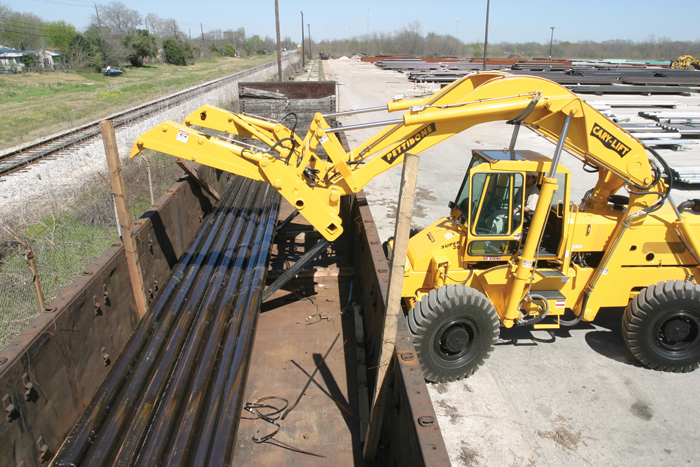 Pettibone’s Cary-Lift product line, which feature overhead lift arms, help improve safety and visibility on the jobsite. In addition to keeping people out of harm’s way, this design is also more efficient from a labor standpoint.

Another major safety factor for material handlers that are required to move pipe is stability. Operators need to be conscientious of the different circumstances that can impact the
stability of a loaded vehicle while in use, including speed, grade and ground conditions.

There are numerous other factors related to the design stability of the machine itself. Weight distribution, suspension, wheelbase and tires can all influence a vehicle’s resistance to tipping, even during completely normal operations.

The level of stability is also going to depend on the vehicle’s intended function versus its actual use on the jobsite. Looking at a wheel loader again as an example, this machine is very good at moving dirt and is mainly designed to do exactly that. Along with a front-mounted lift arm, wheel loaders feature articulated steering that is not conducive to carrying heavy loads and turning at the same time.

A wheel loader can lose as much as 50 percent of its rated load capacity when going into a turn. Because of this, drivers with sharp turns in front of them may have no choice but to resort to multiple-point turns, moving forward and back as much as needed until the turn is complete.

Unfortunately, sometimes operators aren’t aware that the physical dynamics of a loader are changing when turning or otherwise maneuvering the machine. Simply relying on the vehicle’s specification data under normal use — and failing to make proper adjustments to the speed, load or turning approach to account for these changes — will lead to a greater likelihood of an accident.

Personnel who work in stockyards where wheel loaders are routinely used are probably familiar with the sight of a loader lying on its side with pipe scattered nearby on the ground. Of course, a danger exists not only to the operator in this type of scenario, but also to bystanders in the vicinity of the machine.

Unlike machines with an articulating joint, some forward reaching loaders have a solid steel frame design that provides the ability to take full loads into sharp turns without sacrificing load capacity or stability. Some machines in this class also have a shorter wheelbase that allows for a better turning radius without affecting load capacity. A wider stance for the lift arms is another feature of some units, providing additional stability as the vehicle’s load is being carried.

Working on a paved or level stockyard drive aisle is one thing, but pipeline construction jobs out in the field clearly provide a whole new set of stability challenges for material handlers. Some stockyards might rely on traditional straight mast forklifts, but these machines are designed to operate on a smooth, graded work surface and aren’t capable of going into rough terrain applications. Using an all-terrain, four-wheel drive machine is a basic necessity when hauling or laying pipe into place during the pipeline construction process.

Another feature offered on some machines to enhance stability is hydraulic frame sway control. Vehicles with this capability can essentially level themselves and the lifting frame to a certain degree in either direction. This leveling action compensates for the irregularities of uneven terrain, helping to ensure operators are carrying a safe, stable load.

Any appropriate material handler can collect a load of pipe from an open stockyard stack. Unloading pipe from railroad gondola cars, however, is another matter. Overhead lifting cranes, like gantry cranes, are commonly used to take pipe out of gondola cars. These cranes can certainly handle the workload, but they require some initial help.

In these applications, an operator or another worker has to actually climb down inside the gondola car and strap the pipe manually before it can be lifted out. This is an extremely hazardous situation because so many things can go wrong inside the car. A strap may slip off the pipe, or other pipes in the car may shift and roll, potentially creating a situation where a person could become trapped, or worse.

The overhead lift arms on some material handlers not only enhance visibility, but also provide the appropriate geometry to allow their lifting forks to tilt down and scoop pipe out of a gondola car. A car can be completely emptied by one machine operator without ever having to put someone physically inside the car. In addition to keeping people out of harm’s way, this approach is also more efficient from a labor standpoint.

Another growing standard in the heavy equipment industry is the addition of ergonomic features that reduce operator fatigue. Adjustable seats, padded armrests, lumbar support and climate-controlled cabs are just a few offerings that make it much easier to work a demanding and long shift. Operators can take advantage of these comforts to avoid fatigue, remain more alert and operate the machine in a safer manner.

The oil and gas pipeline industry, like many business sectors, is highly cognizant of safety and puts forth an exceptional effort to make jobsites safe. That said, the need for speed, efficiency and profits can sometimes overshadow safety concerns. Fortunately, manufacturers are doing their part to aid production companies by introducing equipment that fully delivers on productivity, while still ensuring that operational safety remains a key priority.

John Major is director of marketing for the Pettibone Heavy Equipment Group, a leading manufacturer of equipment for the oil and gas, forestry, recycling and construction industries. The group is comprised of the Pettibone/Traverse Lift, ARDCO and Barko Hydraulics brands.