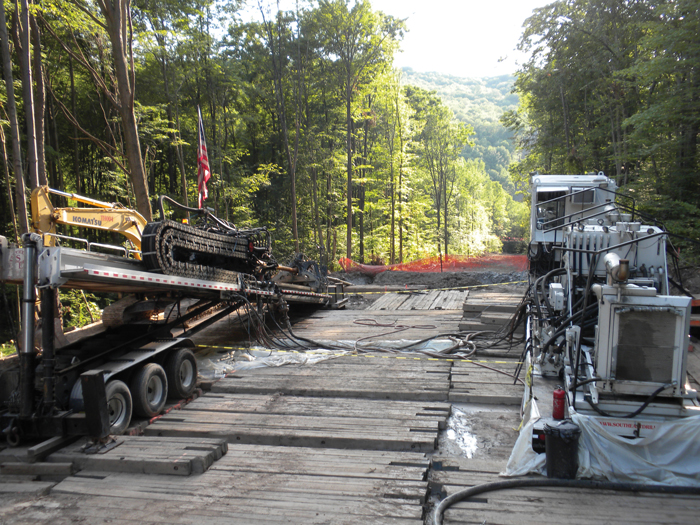 Southeast Directional Drilling (SEDD), one of the first horizontal directional drilling contractors to work in the Marcellus and Utica shale formations, is familiar with and has the necessary equipment to tackle the hard rock formations common in these emerging shale plays.

The project, for Pennant Midstream LLC, involved two sections of pipe, which
SEDD president Todd Barton refers to as the 600 and 700 lines. Pennant Midstream is the partnership between NiSource and Hilcorp Energy that operates the Hickory Bend
cryogenic processing plant and its associated pipelines.

“It was typical lengths (for SEDD) by-and-large. Anywhere from 1,000 ft up to the longest crossing of about 4,000 ft and under various roads, properties, interstates, wetlands and rivers,” Barton says.

“It was typical for the area; fractured shale and limestone with native soils on either side of the crossing. You had to penetrate a layer of dirt to get to the bedrock or the shale formations (which were) typical, medium to hard formations ranging probably up to an excess of 10,000 psi of unconfined compression strength,” he says.

The biggest headaches, and some would say a nightmare for even the most experienced driller, are the transitions from native soils to cobble (similar to that of a river bed) before reaching the solid formation. This is where experience and expertise come in
to play.

“It’s slow going,” Barton says. “You preplan your penetration rates, the mud pressures you run and the tooling you select.” 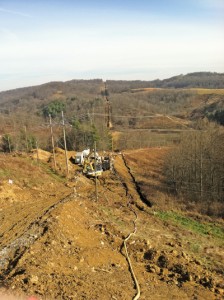 To break through the rock, and where Barton says SEDD has an advantage over its competition, is the roller cone rock reamers, which are designed in-house and are proprietary to SEDD. The company has built its own reamers since 2002, which provides SEDD a more reliable product and availability as needed. This project called for 24-, 26- and 48-in. reamers.

“Southeast tackles any project the same way no matter if it was rock or dirt,” says SEDD operations manager Eddie Ramos. “With preparation, experienced manpower and overall knowledge of all conditions, Southeast goes into every project with contingency plans and plenty of support equipment to complete the project.”

The Hickory Bend project stayed true to this statement from mobilizing the HDD drills, to 14 trailers of support equipment and the crew of 10 SEDD employees, as well as a local crew of 50 laborers, operators and teamsters.

Because of proper planning experience in the Marcellus and Utica plays, the project took four months to complete — January 2014 to April 2014 — in the wet and cold Midwest winter and early spring. That is typical, Barton says, but to meet the deadline a night shift was required on some sections due to the rainy conditions.

Even with the hilly terrain and windy roads common to Appalachia and rights of way that can barely accommodate a drill rig, Barton reports that there were no snags or unexpected discoveries during this process. The biggest challenge, other than the very typical mud disposal, was the Mahoning River crossing. It wasn’t that the crossing was about 4,000 ft; it wasn’t that it was for the 24-in. pipe it was the fact that the bore had a 70-degree side bend in it.

“We have a lot of experience with slight side bends of 10 degrees or 20 degrees,” Barton says. “It’s just multiplying the risk and putting the crew on (the project) that had the knowledge to do it.”

Why such a severe side bend? Barton chalks it up to a right-of-way issue involving land owners and wetlands as the pipeline snaked across the Mahoning River and took an abrupt left-hand turn to stay on course.

“So essentially, we were steering the entire crossing the whole time while we were drilling across,” Barton says. “Personally, I don’t know of any other drilling company that has ever done a 70-degree side bend. I have never seen it done especially with a 24-in. pipe. I am sure it has been (done) but with 24-in. pipe that is a hell of a pull.”

Helping guide the crew through the bore was SlimDril International, which operates a proprietary optical gyroscopic steering tool that enabled SEDD to drill the bore without additional access points to install tracking wires. This technology, Barton says makes HDD work less invasive because land did not need to be cleared and holes dug to lay tracking wire.

Once again, familiarity with the region and planning got the SEDD crew through the four-month project and Barton was happy to report that there were no inadvertent returns to land owners’ wells, which is a real concern in the region because of the depth of the wells.

“That was a real concern for us. We are not out there to make enemies, we are out there to be stewards of the area where we are working,” Barton says. “We work very carefully and methodically no to have those frac outs. Inadvertent returns are very likely on any drilling you do up there.”

As a company that migrated from larger cross country pipeline work that was prevalent in the first decade of this century to the smaller transmission line work in the first half of this decade, Barton is beginning to see a shift back to the larger lines. Specifically, Barton said that late 2015 to 2017 will see a boom in larger lines coming from the shale plays as the United States inches toward its energy independence.

So what does this mean for the industry?

While Barton acknowledges that there have been strides in the advancement of HDD electronics and reporting tools to get information from the rig to the operators and engineers for better project analysis, he has not seen appreciable equipment advancements in the last five to eight years, save for SlimDril’s gyro tool.

Advancement is needed as more and more drillers will be tackling rock formations to build these larger lines in and around the shale plays. He credits Vermeer and American Augers as two of the leaders in building new drill rigs with the advanced technologies the industry needs to succeed.

“There has been a little bit of advances in tooling in downhole reamers that we are noticing. We manufacture all of our own reamers in-house but there have been several companies that have come up and started to market diamond style bits and reamers,” Barton says. “We, ourselves, are actually trying to take advantage of it and give it a test.

Mike Kezdi is an assitant editor at Benjamin Media Inc. and a contributing staff editor of North American Oil & Gas Pipelines. Contact him at mkezdi@benjaminmedia.com.