... How Technology Provides Stability in an Era of Low Prices

Rigs Down, Production Up

How Technology Provides Stability, Profits in an Era of Low Prices

If the rig count were the only gauge used to measure the health of oil and gas activity in Texas’s Eagle Ford shale, some observers might conclude that the patient’s typically “stable” condition could reasonably be escalated to “serious.”

After all, as crude oil prices have fallen, so have the number of active Eagle Ford rigs. In just the three months since November 2014, the total dropped about 27 percent, from 264 to 192, according to Energy Information Administration (EIA) data published in March 2015. And in light of continuing weak global energy demand, the prospects for a quick rig count turnaround seem unlikely. 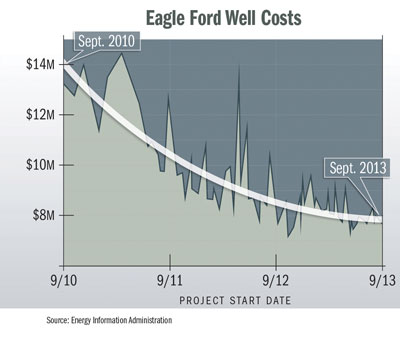 But don’t cue the dirge quite yet. A decline in rigs isn’t necessarily a predictor of falling production. In fact, during the natural gas price plunge of 2008, output actually increased, even as rigs came offline.

In short, rig counts can be misleading. At least that’s the view of Citigroup commodity strategist Anthony Yuen, co-author of a Citigroup research note comparing the events of 2008 to today’s drop in U.S. crude oil prices, which have fallen more than 50 percent since the summer of 2014.

Today, the number of natural gas rigs is less than half that, closer to 300. Yet the data indicates that production is up 50 percent from when the rig count was at its highest point.

Credit drilling and operating efficiency for the boost, says Citigroup.

Can boosting efficiency have the same effect in the Eagle Ford? Can technology — automation in particular — mitigate the drop in crude prices by reducing operating costs, increasing product flow, and helping to capture marketable NGLs and condensates?

There’s ample evidence those types of improvements are already in play. And they’re having a big impact on operators’ P&L statements. statements.

Before 2008, the Eagle Ford shale formation — a narrow, roughly crescent-shaped band sweeping 400 miles across Texas — hadn’t caught the eye of many oil and gas companies. Although the area was known to contain hydrocarbons, the rock unit’s permeability was exceptionally low. It was doubtful that oil and gas could flow through to a production well.

Until, of course, it did.

The Eagle Ford success story is the stuff of legends: five-year-old independent energy company Petrohawk combines two proven technologies and cracks a formerly unyielding energy deposit, demonstrating the area’s viability with a well that comes in with an initial flow rate of 7.6 million cubic feet of natural gas per day (MMcf/d). By September 2014, the Eagle Ford roll call includes industry luminaries and lesser-knowns alike, who, all together, are pumping out more than 1.5 million barrels per day (bpd) of crude oil and light condensate. Late in 2014, the Eagle Ford hits the 1-billion-barrel mark, outpacing its North Dakota rival, the Bakken. And projections for future growth are impressive, with suggestions that the region will produce 1.8 million bpd of oil equivalent in 2015.

Adding to the Eagle Ford’s accolades is the fact that the area produces the bulk of America’s condensate, which grew from 178 million barrels in 2009 to 274 million barrels just three years later. And with minimally processed condensate given the nod for export by the U.S. Commerce Department’s Bureau of Industry and Security (BIS), the sky seems to be the limit. But then, the price of crude oil falls. Again and again and again.

Yes, it’s true, the drop in price has caused a stutter in the Eagle Ford rig count. However, the consensus among international analysts
is that not only can the Eagle Ford weather a prolonged period of lower prices, it can prosper.

For example, in December, when oil was trading around $60 (USD) per barrel, global energy researcher Wood Mackenzie said
production would remain profitable even if prices dropped to around $49 per barrel.

Analysts at ITG Investment Research Inc. were even more optimistic, saying that in some areas of the Bakken, Permian and Eagle Ford, explorers can drill new wells profitably, even if crude falls to $25 a barrel.

So far, the production numbers justify such rosy outlooks. Oil output across the United States has continued to rise despite the national rig count sagging. During the first full week of January, the EIA reported, production rose by an additional 60,000 bpd.

“These increases have occurred despite the (Eagle Ford) region’s relatively high well decline rates,” an EIA briefing said. “However, by offsetting the natural declines through the use of new recovery techniques, further production increases are possible.”

As the EIA suggests, the Eagle Ford has moved from being capital intensive and price-driven to technology intensive and innovation-driven. As such, operators have been able to squeeze more product from those intransigent formations, and save money in the process. Among the improvements, better completion techniques have boosted initial production rates. Tighter well spacing has helped maximize production and increase reserves, and altering variables like the frac fluid and proppant is further building output. Integrated electrical and control systems have decreased energy consumption, while computerized monitoring oversees key process data, including flow rates, pressures, and leak detection — really, anything that could stop or slow production. In short, automation is helping both product and cash flow in the Eagle Ford.

Still, Eagle Ford operators admit that because the region is highly variable, with wells in the same field performing differently, it can be difficult to generalize break-even costs. And no one seems comfortable betting on how low oil prices would have to fall before production starts to level off, or even decline. 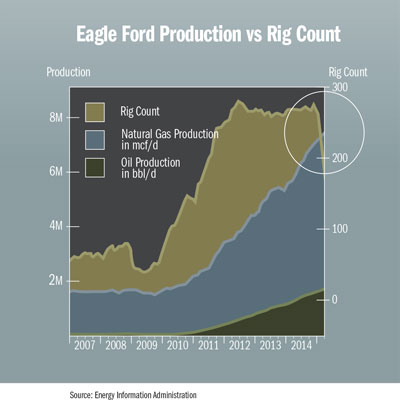 Condensates on the Move: Incentives for Removing Wet Gas Liquids

Abdel Zellou, Ph.D., a U.S. midstream and gathering market expert with global pipeline services provider T.D. Williamson (TDW), has spent considerable time over the past several years examining productivity nuances in the Eagle Ford region. As such, he understands the pressures that operators there are dealing with. Chief among them, he feels, are low recovery and high decline rates compared to conventional wells and the need to control operating expenses, while still assuring personnel safety and pipeline integrity, which can be particularly troublesome given the high paraffin content of Eagle Ford crude.

As he explains, in the past, on an energy content basis, natural gas and crude oil were priced at parity.

“Now, even with the drop in crude oil prices to around $50 per barrel and natural gas at around $3 per million BTU, natural gas is priced at about half of crude oil on an energy content basis,” he says. In other words, for the equivalent amount of energy, natural gas priced at $3 per million BTU is equal to about $17 to $20 per barrel of oil. Granted, that’s considerably less than the $50 or so that oil was trading at in January, but the gap is certainly smaller than when oil was $100 per barrel.

What this means, Zellou says, is that there’s an economic incentive for removing the liquids from Eagle Ford production and selling them at a premium. And innovation (read: Automation) can be used to get more liquids out easier and faster. Which is particularly important in light of two projections: The Energy Policy Research Foundation’s forecast that by 2017, 19 percent of all NGLs produced in the United States will come from the Eagle Ford, and Citigroup’s prediction that exports of light and ultralight crude from the United States could reach 1 million bpd by the end of 2015.
Mexico, for one, would like to get its hands on some of that — a tenth of the total, to be exact.

Following the BIS decision to allow the export of ultralight oil, Petroleos Mexicanos (PEMEX) petitioned the U.S. Commerce Department to import 100,000 bpd of light crude. If approved, it would allow Mexico to increase gasoline production and improve refining. In exchange, PEMEX would send its heavy oil to refineries on the United States

Gulf Coast that are configured for processing it.

Automation is Part of the Profit Equation

In a low price environment, pushing more product is a sensible option. But it’s not the only one. Reducing costs and eliminating inefficiencies are equally valid choices.

The removal of wet gas liquids fulfills all of those goals. In addition to providing marketable products, it aids in pipeline maintenance. Liquids in the line reduce the optimum flow of natural gas and drastically increase fuel and power consumption. Capturing them avoids those issues.

“One of the major line items in the operation of midstream and gathering lines is the fuel cost to gather, dehydrate, and compress the gas,” Zellou explains. “Not only does efficient liquids removal create a revenue opportunity, it also helps the operator minimize costs.

So, where, exactly, does automation figure into the calculation? For Zellou, it fits into both the health and wealth of a pipeline. And the potential impact is enormous. 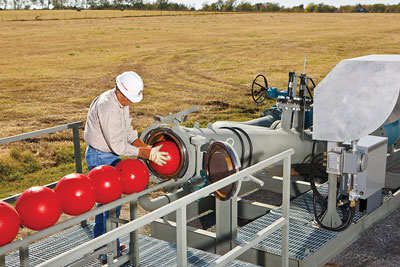 Switching to automated pig launching is one way pipeline operators could save money in an era of low commodity prices. Using equipment that can be remotely programmed to deploy multiple spheres or pigs on a regular schedule could save hundreds of thousands of dollars.

Although he’s still working to put hard numbers to the benefits Eagle Ford operators might accrue by, for example, switching to automated pig launching — using equipment that can be remotely programmed to deploy multiple spheres or pigs on a regular schedule – the preliminary figures suggest savings in the hundreds of thousands of dollars.

And here’s how that adds up: Not only can automated systems more efficiently launch spheres to capture valuable NGLs and optimize product flow (that’s the wealth part Zellou mentioned), they can dispatch cleaning pigs to eliminate paraffin, the wax that creates an environment where corrosion-causing, deadly hydrogen sulfide-breeding microbes thrive (which is the health part).

Automation can also reduce the blowdown associated with opening and closing the doors during a normal pigging operation by up to 90 percent. And it increases the life of the valves used in the system because they’re operated less.

But beyond those benefits, automated, unmanned operation reduces work hours and helps protect personnel safety. And in the Eagle Ford, the well-being
of the workforce has become a significant challenge.

That’s because as the region has boomed, travel along the Eagle Ford’s remote, narrow roads has become more treacherous. Crews who need to load and retrieve pigs or spheres from a non-automated pigging system may face daily trips to those lines, easily driving as much as seven hours. But with auto-launching, field personnel are on-site only twice during an entire cycle of a week or more, significantly reducing personnel travel time.

Are Lower Prices the New Norm?

It could be said that for oil and gas operators, there’s no such thing as living in the present. Even the commodity pricing structure is built on futures.
So, what do the years ahead hold for the Eagle Ford? What will the new normal be? Given the complexity of the global energy market, the impulses of OPEC, and the continuing ban on American crude exports, it’s not easy to predict with complete certainty.

But what we do know is this: Automation is continuing to breathe new life, health, and wealth into the region.