Westward ho! After being built to flow east, now the Rockies Express Pipeline is now going west too. A newly built extension to the pipeline began shipping the first 0.25 billion cubic feet per day (Bcf/d) of natural gas to be delivered to points west in Ohio, Indiana and Illinois, according the U.S. Energy Information Administration. 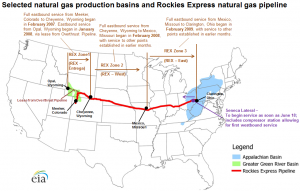 The Seneca Lateral is a 14.3 mile pipeline in Southeast Ohio with a capacity of 0.6 Bcf/d to flow gas north from the MarkWest Seneca natural gas processing plant to Tallgrass Energy’s Rockies Express (REX) mainline, where a newly built compressor station will allow this gas to be delivered westward.

No new pipelines will be added to the mainline, according the EIA report. The project will allow bidirectional flows — both east and west — to occur on existing portions of the pipeline, where until now natural gas could only flow eastward, predominantly from western basins.

In November 2013, Tallgrass Energy and the other owners of REX received permission from Federal Energy Regulatory Commission (FERC) to ship from east to west within Zone 3 of the REX system without violating the agreements with western shippers that contracted to ship natural gas west to east across multiple rate zones. Zone 3 extends from Clarington, Ohio, on the Ohio-West Virginia border, to eastern Missouri.

According Tallgrass Energy, the remaining capacity on the Seneca Lateral is fully booked and will come into service in the fourth quarter of this year. In addition, REX has received binding commitments to deliver another 1.2 Bcf/d of Appalachian production west on its existing mainline as part of the Clarington West Project, which REX plans to bring into service in either 2016 or 2017. Upon completion of this project, REX will have capacity to ship 1.8 Bcf/d of gas both east and west in a significant portion of Zone 3.

It is not yet known whether the Clarington West Project will allow for an expansion of westward gas flows to cover all of Zone 3, or just a significant portion of it, the EIA reported. However, there are a number of important interconnects that would be able to receive flows of Appalachian gas on REX, beginning from its easternmost point in Clarington, where it interconnects with the Dominion Transmission (DTI) pipeline and the Texas Eastern Transmission Company (Tetco) pipeline.

There are plans to add five new receipt points to provide REX with the capacity to receive at least 2.35 Bcf/d of Appalachian production by the end of 2016. Other interconnects in Zone 3 that could benefit from the REX expansions include:

In addition to REX expansions, a number of other projects are planned to provide capacity to flow Appalachian production westward. These include Tetco’s Ohio Pipeline Energy Network (OPEN) project to flow additional gas to REX at Clarington, and Tetco’s TEAM 2014 project to flow gas to Lebanon and the Gulf Coast on existing pipelines from western Pennsylvania. They also include a DTI project to ship 0.25 Bcf/d to its interconnects with REX and Tetco in eastern Ohio and to ship another 0.25 Bcf/d directly to the Lebanon hub.