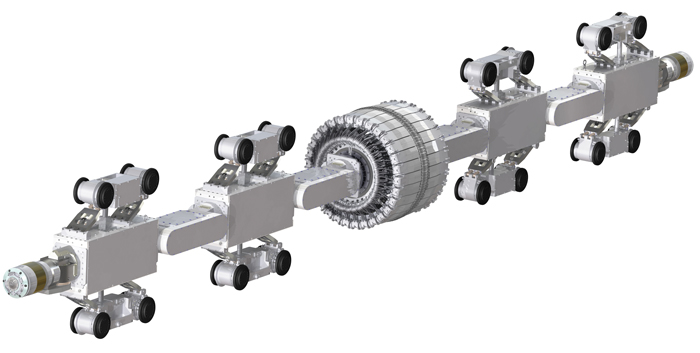 The new 30/36 Explorer robot is Pipetel’s largest offering for its unpiggable pipeline service.

Through most of the 20th century, when a bulk of the 2.6 million miles of oil and gas pipelines in the United States were built, those transmission systems were not designed with through-the-line inspection in mind.

In the past 25 years, though, regulators have mandated that new pipelines be built to allow the use of in-line inspection (ILI) tools — aka “smart pigs” — to help companies ensure integrity and safety. Meanwhile, aging pipelines have become a paramount concern.

Older pipelines often feature difficult obstructions such as bends, plug valves, vertical sections and other constraints, as well as those with pressure levels below what is needed to propel traditional smart pig technologies. These pipelines have been deemed “unpiggable.” That is, until recently.

Coinciding with the current push to improve pipeline integrity throughout the industry, a new technology hit the market at the close of 2010 to make those unpiggable pipelines piggable. 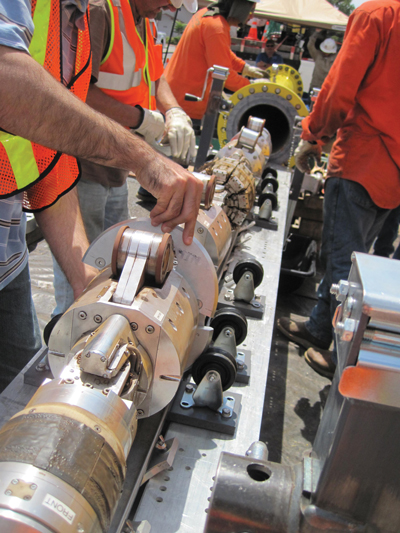 Stemming from a 2002 U.S. Department of Transportation ruling pertaining to natural gas pipelines and aging infrastructure, collaborators from academia, industry and government agencies worked together to develop a new technology that would provide operators with accurate information on the state of their unpiggable pipelines.

Pipetel Technologies Inc. has been offering this new technology commercially since December 2010. The company’s comprehensive inspection service provides full non-destructive testing and visual inspection of natural gas transmission and distribution pipelines from 6 to 36 in. This technology arrived at a time when the oil and gas industry is seeking to learn more about its pipelines than ever before.

As pipelines age and corrode, they require active integrity management to maintain safe operation. The Explorer robots are meant to allow natural gas pipeline operators to inspect pipelines that cannot otherwise be inspected by other in-line inspection tools.

The Explorer technology was the result of a nearly decade-long program led by NYSEARCH, the research and development arm of the Northeast Gas Association (NGA), to develop a solution to inspect unpiggable pipelines. Along with InvoDane Engineering Ltd., Carnegie Mellon University and the Southwest Research Institute, the research and development program produced these new robots that are capable of inspecting unpiggable pipelines.

The proprietary Explorer robots are a combination of various technological innovations, including an articulated, modular robot that allows inspection of various natural gas pipeline configurations that previously could not be inspected; a self-powered, untethered and remote-controlled robot that allows for inspection of long distances without shutting down the local natural gas service; high definition cameras at the front and back end of the robot for visual information; magnetic flux leakage (MFL) and caliper sensors for accurate and reliable data; and proprietary software to analyze the video images and integrity data collected for a detailed customer report.

Because of these features, the Explorer robots are able to inspect natural gas pipelines that are not piggable by conventional ILI tools. These robots can also inspect cased pipelines and pipelines located at difficult to access locations, such as underneath urban infrastructures and rivers. Furthermore, they can inspect these lines without having to shut down service to customers during the process.

“Pipeline operators realize that customer service is vital to their organization and gas interruptions are not acceptable to large industrial and residential customers,” says Rod Lee, general manager of Pipetel Technologies.

The industry has welcomed the technology and sees its value, according Paul Laursen, president and founder of InvoDane, which was responsible for refining the Explorer technology before its commercial release.
“The deployment is more involved than standard ILI,” he says, “so the project cycle is a bit longer for the deployment of each client.”

Laursen notes that the sensing system on the Explorer robots is similar to any other inspection method.
“It is how it is delivered in the pipe that makes this technology able to access pipelines that can’t be inspected cost effectively in any other way,” he says.

As demand for the technology grows, Pipetel has continued to develop and enhance the Explorer robots to meet demand and improve safety and reliability of pipeline assets, Lee says. At first, the robots were only capable of inspecting small to medium diameter pipelines, but that range has expanded to include 6- to 36-in. pipe diameters.

In addition, Pipetel introduced Inline Charging Technology last year to allow the robots to be recharged inside the pipeline, which he says extends the inspection range “infinitely.” Earlier this year, the company added a Laser Deformation Sensor to accurately measure the size of dents and ovality in pipelines.

The introduction of the inspection robots four years ago has helped owners better manage their assets.
“In the last four years the industry has been able to be more proactive with their pipeline integrity management and maintenance programs,” Lee says. “Prior to 2010, this information was not available for unpiggable pipelines. Operators can now perform repairs at scheduled times rather than on an emergency basis, thus avoiding the high cost of urgent repairs.”

Although aging infrastructure remains a concern in the pipeline industry, initiatives such as the NYSEARCH research program that resulted in the Explorer robots are improving the safety and integrity of these older systems regardless of how they were built. The unpiggable is no longer an obstacle.