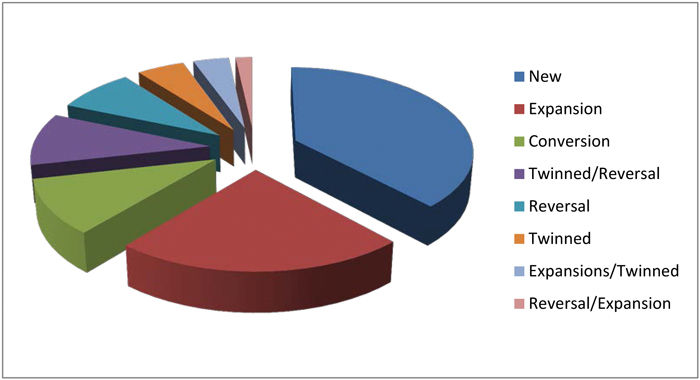 The oil and gas industry’s approach to change has often been compared to the formation of fossil fuels themselves: slow, steady and done under pressure.

These days, however, energy companies are stepping up the pace. For one thing, they’re being forced to respond to altered market conditions arising from new shale and tar sands activity. Take for example the production growth in the Marcellus shale, which covers approximately 95,000 square miles (152,883 km) of the northeastern United States. When a region this size goes from being a natural gas importer to a natural gas exporter in just a few, short years, infrastructure changes need to be made — and fast.

Yet building a new pipeline to carry the new flow is a proposition that can easily run into the billions of dollars and take years to complete. The Keystone XL pipeline, announced in 2008, is a prime example. With an estimated cost of more than $7 billion USD and seemingly unending delays, its fate remains uncertain. Instead, to accommodate the rapid change of supply and demand demographics, the industry is taking a less expensive, quicker route: the repurposing of existing lines.

Reversing Fortunes
Before the Marcellus boom, communities in Pennsylvania and West Virginia relied largely on natural gas from the western United States for heat and the raw materials for manufacturing. But with natural gas now pouring out of the enormous shale formations nearby, the region has acquired a home field advantage. Because this new local production is more than sufficient to meet current local demand, there’s enough capacity left over to ship some out to other states, as well as north to Canada.

It took a pipeline reversal to change the area’s role from energy importer to exporter. By flipping the flow of a southbound pipeline to run northward, a pipeline operator can now ferry Marcellus gas to power-hungry markets in southern Ontario and Quebec. Some companies are also reversing pipelines to move Marcellus gas to Alberta to be used as a diluent for oil sands development.

While reversing pipelines may be expedient, there are additional risks that can occur when a pipeline is modified to “do something it wasn’t expected to do in the first place,” says Dr. Mike Kirkwood, T.D. Williamson (TDW) director of business development, transmission. With increasing demand for energy, plus the ardent development of unconventional resources and new products placing more stress on existing oil and gas transportation systems than ever before, Kirkwood believes the number of pipeline re-appropriations  will continue to increase in the future. He wants to make sure operators are taking the appropriate integrity measures so that reversed and repurposed pipelines don’t suffer unexpected consequences.

Case in point, the recent pipeline incidents in Michigan and Arkansas. Both pipelines had been repurposed to transport diluted bitumen — aka dilbit — from Canada’s tar sands into the United States before they ruptured, each causing millions of dollars of damage. Although both pipelines had undergone government-required inspections, the risk assessment criteria used didn’t appropriately characterize the weaknesses that ultimately produced their failures.

With the United States recently approving a twin reversal and expansion project to cross the Canadian border to help ease the tar sands bottleneck — a plan that includes converting an existing pipeline to carry dilbit — incidents like these are top of mind for operators, regulators and the concerned public.

A Bit on Dilbit
Canadian tar sands produce a low grade crude oil known as bitumen that is too thick to transport as is. However, thinning it with a natural gas condensate like benzene can get it flowing. The new expansion pipeline noted above will carry condensates from the United States to the tar sands, where they will be used to dilute the bitumen. The existing line, which was initially built to carry thinner oil at lower pressure in the opposite direction, will be reversed and converted to a higher-volume vehicle to move the dilbit west across Canada, where it can be readied for export to new markets.

Dilbit is higher density than crude oil, so it flows under higher pressure, and this could stress undetected internal weaknesses. Corrosion fatigue was blamed for the Michigan failure. While the jury is still out on the cause of the Arkansas line breach, the early evidence points to fatigue resulting from heavier oil combined with hook cracks in brittle electric resistance welded pipe. Kirkwood is concerned that, without adequate inspection, a similar fate could await the new dilbit-converted pipeline.

“When you change the duty of a pipeline, both through reversing flow and changing the product, new threats can present themselves that were not necessarily considered during its design,” Kirkwood says.

Integrity Innovations
Kirkwood, who has spent much of his career studying and writing about the integrity of oil and gas infrastructure, is, not surprisingly, a staunch advocate of integrity management. He believes more thorough inline inspection could reduce the risks of pipeline reversal.

A high level pressure test using water — known as hydro-testing — is often considered the gold standard in testing for pipeline leaks. But hydro-testing alone may not be enough to completely assure reliability.

“Hydro-testing is useful in determining the pipeline’s standing for present use,” Kirkwood asserts. “But when you make a departure from the original design scope like reversing product flow, there’s so much more you need to understand in terms of risk. You have to ask yourself, at the very least, if it were a new pipeline, what would I do to identify risks and detect and mitigate problems?”

In addition to hydro-testing, a variety of inline inspection (ILI) technologies are available. However, most of these technologies have focused on metal loss. Spotting corrosion is beneficial, but this data often fails to give operators a complete view of pipeline health. Pipelines can fail due to a variety of defects such as corrosion, dents, cracks, stresses or any combination thereof.

The good news is the pipeline services industry is well aware of the shortcomings of current integrity testing. Next generation inspection tools are already in field operations, including TDW’s Multiple Dataset Platform with SpirALL EMAT, which combines a variety of inline technologies to search for multiple defect types concurrently. These new tools offer better crack detection, prioritization of defects for faster repairs on critical issues and more complete analysis of defects through advanced software. It’s Kirkwood’s belief that such cutting-edge integrity innovations will help operators make more informed decisions about pipeline repurposing in the future, helping to prevent events such as the Michigan and Arkansas incidents.