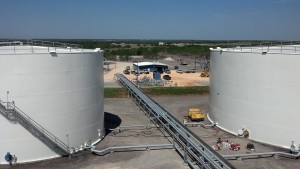 Based on Bentek Energy’s analysis, oil production from the Bakken and Eagle Ford shale formations increased by more than 86,000 barrels per day (b/d) in July.

That amounted to a 3.4 percent increase for the month, according to Bentek, an analytics and forecasting unit of Platts, a leading global provider of energy, petrochemicals, metals and agriculture information.

In North Dakota, the active oil rig count is close to 200 and the highest level in nearly two years, according to Jack Weixel, Bentek Energy director of energy analysis.

“Oil production gains from the Bakken and Eagle Ford shale formations are a major reason why U.S. imports of crude oil have dropped to levels not seen since the mid-1990s,” Weixel says.

“Prices of Eagle Ford Shale crude dropped nearly $12 per barrel (/b) from mid-July through mid-August, while the price of Bakken crude fell $7.38/b during that time period,” says Richard Capuchino, Platts managing editor of Americas crude.

The Platts Eagle Ford Marker, a daily price assessment that was launched in October 2012 and reflects the value of oil from the Eagle Ford Shale formation in South Texas, was $98.77/b on Aug. 18 after reaching an intra-month high of $110.71/b on July 23. The downward price movement was largely attributed to weakness in the price of Light Louisiana Sweet (LLS), the basis for the Eagle Ford assessment.

The monthly price performance of oil from the Bakken formation at Williston, North Dakota, ranged from a low on Aug. 18 of $84.65/b and a high of $92.03/b on July 17, according to the Platts Bakken data.

The Platts Bakken, introduced earlier this year, is a daily assessment of price for oil closest to the wellhead prior to determination of transportation by rail or pipe. The assessment reflects a sulfur content of 0.2 percent or less and an American Petroleum Institute (API) gravity –a measure of how heavy or light a grade of crude oil is compared to water – of 42 or less, similar to the nature of North Dakota Light Sweet crude.