... Robert Powelson to Step Down as FERC Commissioner in Mid-August

Robert Powelson to Step Down as FERC Commissioner in Mid-August

Robert F. Powelson announced June 28 that he will be leaving his position as commissioner at the Federal Energy Regulatory Commission in mid-August. 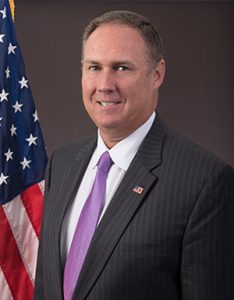 Powelson was nominated to FERC by President Donald J. Trump in May 2017 and confirmed by the U.S. Senate on Aug. 4, 2017. He previously served on the Pennsylvania Public Utility Commission (PUC). His departure could spell uncertainty at FERC, as it will leave the commission with two Republicans and two Democrats.

“I express my gratitude to President Trump for nominating me and to the members of the United States Senate who confirmed me,” Powelson said in a statement. “I thank my colleagues for their steadfast commitment to FERC’s mission, members of the public who help inform our decisions, and the staff at FERC for their dedication and support throughout my time at the commission, especially the members of my office.”

He added that it was “the honor of a lifetime” to serve on the commission. After leaving FERC, Powelson will become the president and CEO of the National Association of Water Companies.

In addition to his role at the Pennsylvania PUC, Powelson is past president of the National Association of Regulatory Utility Commissioners (NARUC), where he also was a member of the board of directors. He served as chairman of the NARUC Committee on Water and represented the Water Committee on NARUC’s Task Force on Climate Policy. Powelson worked very closely with NARUC leadership on aggressive pipeline safety standards with the U.S. Pipeline and Hazardous Materials Safety Administration (PHMSA).

Prior to joining the Pennsylvania PUC, Powelson served as president of the Chester County Chamber of Business & Industry. In 2005, he was selected by the Eisenhower Presidential Fellows to be a U.S. fellow in Singapore and Australia.