Representatives of the U.S. oil and gas pipeline industry were feeling good in the Arizona desert. The 69th annual convention of the Pipe Line Contractors Association (PLCA) was held Feb. 14-18 at the Hyatt Regency Gainey Ranch in Scottsdale, Arizona. Registration for the convention was strong, with 584 in attendance. 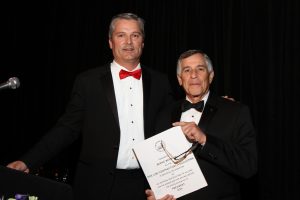 The general mood at the convention was positive, in the wake of the recent inauguration of President Donald Trump. This was especially so considering the Jan. 24 executive orders to approve the Keystone XL pipeline and the Dakota Access Pipeline water crossing in North Dakota. Immediately prior to the convention, industry optimism was further buoyed by the approval of more than $7 billion for the construction of the Rover Pipeline and Atlantic Sunrise Pipeline.

Bernie Bermack, of Pe Ben USA Inc., was chair of the overall convention as PLCA’s outgoing president. Business sessions before the full convention started included a meeting of board of trustees for the Pipeline Industry Advancement Fund, PLCA Scholarship Foundation and a session of World Federation of Pipeline Industry Associations. Every other year, PLCA holds an education auction. As in the past, Butch Graham of Ritchie Bros. handled the auction duties. The auction raised enough money to fund scholarships for 20 students.

Thursday and Friday networking breakfasts followed by a general meeting all members. The Thursday dinner featured a presentation by Caterpillar and PipeLine Machinery of the President’s Award to Bermack.