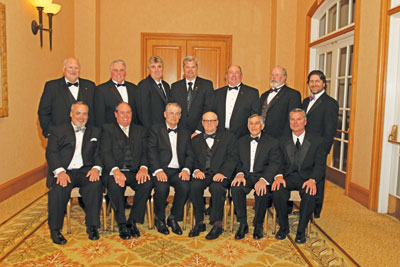 The PLCA board of directors. (Photo courtesy of Ben Arnold.)

The PLCA kicked off the first night of the event with its biennial PLCA Scholarship Foundation auction, which raised more than $600,000. Ritchie Bros.’ Butch Graham conducted the fundraiser event with all of the conventioneers in attendance.

As they do every year, Caterpillar and Pipeline Machinery International hosted a Gala event on Thursday night that included a reception, dinner and entertainment. At the dinner, Caterpillar presented Wise with a special award recognizing his presidency.