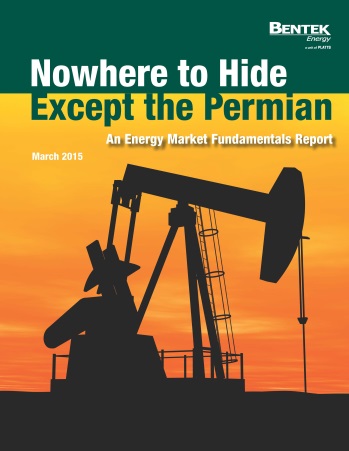 Platts Bentek’s “Nowhere to Hide Except the Permian” provides a detailed overview of the characteristics that make the Permian Basin such an attractive location for producers even in a low-price environment.

The Permian Basin in West Texas is the most active hydrocarbon-producing area in North America, and even in a low-price environment it remains among the most favorable areas on the continent to drill of oil, natural gas liquids (NGL) and natural gas, according to the latest report issued by Bentek Energy.

In the last three years, oil production in the Permian, which straddles Texas and New Mexico, has jumped 50 percent, while natural gas production has climbed 30 percent and NGL output has increased 61 percent, the 20-page report states. Horizontal drilling, new exploration and production techniques, and a multitude of unconventional producing formations have led to a major Permian renaissance.

The Permian also is showing greater resilience during the recent drop in drilling in response to falling crude oil, NGL and natural gas prices. Permian rig count declines have been mainly vertical rigs, rather than horizontal rigs.

“Unlike other U.S. producing basins, the Permian Basin is less exposed to adverse market conditions because of its more favorable production economics as well as its closeness to major markets,” said Ross Weyno, senior energy analyst at Bentek Energy.

“Nowhere to Hide Except the Permian” provides a detailed overview of the characteristics that make the Permian Basin such an attractive location for producers even in a low-price environment.

The report includes detailed information on the following:

“Bentek currently expects Permian oil production to increase 40 percent over the next five years,” Weyno said. “However, the Permian is not immune to adverse market conditions. If crude prices fall to less than $40 per barrel for a sustained period, Permian production would be at risk.”

The full report is complimentary to Bentek Energy subscribers.