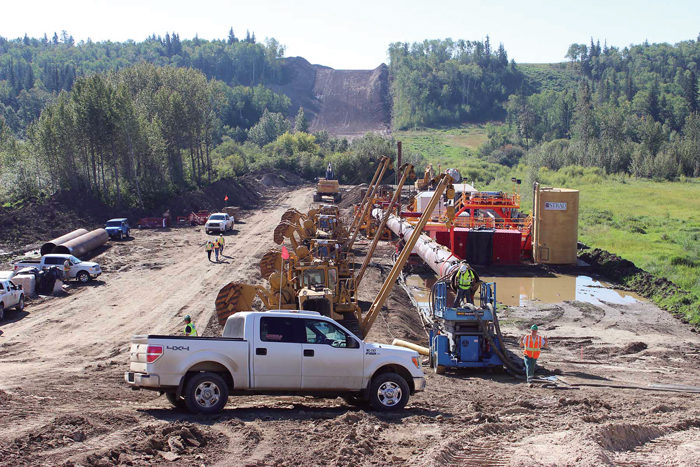 When it comes to building innovative equipment, Herrenknecht AG has more than its share of experience. Founded in 1977 by Martin Herrenknecht, the company has grown to become a worldwide leader in the manufacture of underground construction equipment, including tunnel boring machines, horizontal directional drills, pipe jacking and microtunneling equipment, and more.

Recently, the company has received acclaim for its forays into the pipeline market, specifically the introduction of the Direct Pipe technology in 2007 and the Pipe Express technology in 2012. For its contributions to the pipeline marketplace, Herrenknecht AG is the winner of the North American Oil & Gas Pipelines 2013 Business Achievement Award. The Business Achievement Award honors individuals, companies or projects having a lasting and meaningful impact within the oil and gas pipelines sector.

Both the Direct Pipe and Pipe Express systems have been recognized by the International Pipe Line and Offshore Contractors Association (IPLOCA) as New Technologies Award winners. Doug Evans, president of IPLOCA and CEO of Gulf Interstate Engineering, cited the ability of Pipe Express to protect the environment, a major factor in the development of large-scale projects today, as one of the reasons for bestowing IPLOCA’s annual award to Herrenknecht. The Pipe Express technology was introduced at the bauma construction equipment show in March 2013, where it received the bauma Innovation Award 2013.

“I am absolutely certain, that with the Pipe Express method our young engineers have come up with something the market is looking for,” says Chairman of the Board of Management, Dr.-Ing. E.h. Martin Herrenknecht, as he accepted the bauma Innovation Award in March. “This innovative method for laying pipelines fits perfectly in the global market — it is environmentally friendly, saves construction costs and there is an enormous demand.” 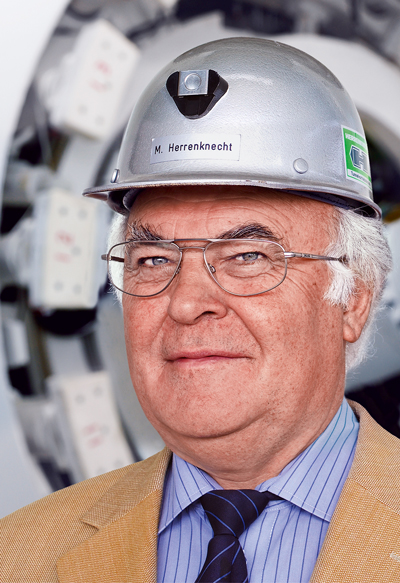 Company Background
Company founder Martin Herrenknecht was born in Lahr, Germany, in 1942 and attended the University of Konstanz, where he earned a professional engineer degree in 1964. After graduation, he took jobs in Switzerland, Canada and Germany, designing road and earth moving machinery and managing work sites. In 1971, he was hired to help direct a tunneling job in the central Alps, beneath Switzerland’s Seelisberg, that involved a tunnel boring machine to grind through the mountain. Over the course of the project, Herrenknecht worked alongside the TBM on a daily basis.

When the project was completed in 1975, Herrenknecht returned to Germany and launched his own company, Engineering Service Company Martin Herrenknecht, in Lahr, about 10 miles from his home town of Schwanau, Germany. After developing machines for mechanical pipe jacking in loose soil, Herrenknecht founded Herrenknecht GmbH in 1977 to focus on equipment manufacturing. In 1980, the company relocated to its present headquarters in Schwanau and in 1998 became a joint-stock company (AG).

From its humble beginnings, Herrenknecht AG today is a 1.135 billion euro equipment manufacturer with approximately 5,000 employees working around the globe. The company’s equipment line now includes a full range of tools for underground construction, including hard- and soft-ground tunneling equipment, auger drilling, horizontal directional drills, direct-jack pipeline equipment, mining equipment and vertical shaft boring equipment. Herrenknecht’s equipment can be seen operating throughout the world, boring holes in the earth from 4 in. to more than 60 ft in diameter.

Herrenknecht’s engineering background and approach to developing technical solutions has been a guiding force for the company since Day 1, according to Ulrich Schaffhauser, who leads the Herrenknecht Utility Tunneling division. “Many of the people here are engineers and technicians, and that is why we have an innovative spirit,” he says. “When I started here 20 years ago most of the people were mechanical engineers, and it is still very much the same today.”

Schaffhauser says that Herrenknecht’s close working relationship with customers is key to developing and refining new products. “We are out in the field, helping our customers design and projects, and by doing that we are able to solve problems and look for new applications. When we see a problem, we find a solution,” he says.

In 2006, the company began developing the Direct Pipe technology, which is basically a hybrid of microtunneling and pipe thrusting technology used in HDD. Direct Pipe allows the installation of pipelines with lengths of 1,500 m or more.

In the Direct Pipe method, a Herrenknecht microtunneling machine is launched from a pit and excavates soil using a slurry system. It pumps the excavated material through a slurry circuit inside the prefabricated pipeline, to a separation plant located aboveground. The pipeline, which is laid out on the surface on rollers and welded to the end of the microtunneling machine, is pushed into the borehole at the same time as excavation takes place. The necessary thrust force is provided by the Pipe Thruster. It pushes the microtunneling machine forward together with the pipeline — with a thrust force of up to 750 tonnes in increments of 5 m. The push force is transferred to the pipeline through the Pipe Thruster’s clamping unit and then to the machine’s cutterhead.

During excavation, the tunnel face can be controlled consistently and safely using slurry-supported tunneling technology even in heterogeneous, water permeable soils. The system reduces the risk for frackouts during excavation, even in difficult geology. Uphill and downhill slopes, as well as curved drives along the alignment, can be managed precisely by guidance systems. 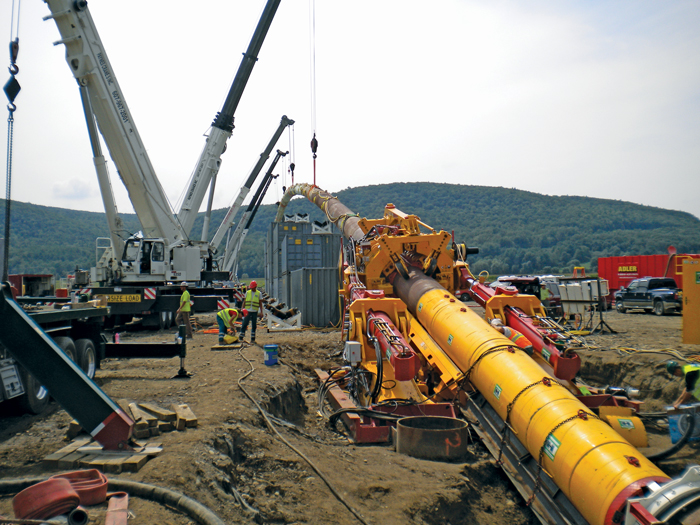 The Direct Pipe method was introduced to the United States in 2010 for the installation of 705 ft of 30-in. pipe under Highway 70 in Arcadia, Fla. (NAOGP, Nov. 2010). REM Directional Inc., subcontracted to perform the crossing, successfully completed the job with horizontal and vertical curves through varying geology that included groundwater, shells, sand and clay. The project showed the merits of the technology and paved the way for future projects in the United States.

Jon Robinson of GeoEngineers, who recently designed an I-84 crossing in Pennsylvania using Direct Pipe to install 470 ft of 30-in. pipe, envisions it becoming another tool in the trenchless toolbox going forward. “When we began the design for this project in 2010, there were probably a dozen jobs done in the world with this method. Now, there are more than 30, and there are several more in design.”
Worldwide, these successful case histories have led to broader industry acceptance of the technology.

“There are so many successful projects with Direct Pipe that it has become almost a standard,” Schaffhauser says. “Now the questions are: How do we refine the technology? How can we increase drives lengths? How can we go faster?”

Next Steps
With the successful launch of the Direct Pipe, the next new development from Herrenknecht for the pipeline market is Pipe Express, which is sort of an offshoot of the Direct Pipe method. “In most buried pipeline applications you need to dig a wide trench,” Schaffhauser says. “In looking at this, we thought: why not drill it? With the Pipe Express you use a narrower trench, so there is less disruption, along with less equipment and manpower needed.”

Pipe Express is designed for near-surface installation of pipelines. Pipelines of up to 2,000 m in length and with diameters of 900 to 1,500 mm (36 to 60 in.) can be installed in a single-step procedure. A microtunneling machine loosens the soil that is then directly conveyed aboveground using a milling unit that is carried along. At the same time, the pipeline is installed underground.

The significantly narrower route enables the earthwork to be reduced to a minimum with this construction method and no groundwater lowering is necessary. This means that Pipe Express has a far lower impact on the environment compared with the conventional open-cut construction method.

Pipe Express is beginning to build a track record of success in the field. In the Netherlands, Pipe Express was used as part of a pilot project in the construction of the North-South Gas Pipeline where it achieved top performances of up to 1.2 m per minute during the installation of 500 m of 48-in. pipe.

In Bangkok, Pipe Express was used as part of the Fourth Transmission Pipeline. In this project, 700 m of 42-in. pipeline was installed along a highway. Using conventional means would have severely disrupted traffic flow, but by using Pipe Express the pipe was installed with minimal impacts. Additionally, work was installed during the monsoon season in several sections with overburdens of 1.2 to 2.3 m. With the heavy rainfall this could not be realized efficiently using conventional construction methods with long and wide open construction pits. 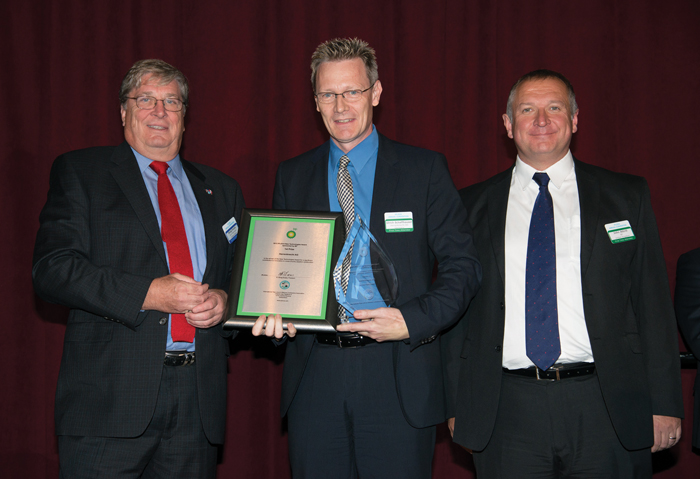 Future
What’s next in the pipeline for Herrenknecht project development team? That all depends on the needs of the market.

“We are constantly supporting the market and offering new products that may pave the way for some projects to be built that are ‘asleep in the drawer,’” Schaffhauser says. “It is a matter of getting the products conceived, developed and then accepted. Once that happens and people see what is possible, then maybe we’ll see some of the projects start to get built.”

Schaffhauser sees the pipeline market remaining strong for the foreseeable future. With the worldwide network of pipelines expected to increase by about 15,000 miles per year, these new products are poised for growth.

“Pipelines continue to serve an important role in meeting our energy needs, and there is more and more of a need for further infrastructure development,” he says. “We are position to support the pipeline industry, and we look forward to developing new tools and working with our customers to complete projects.”