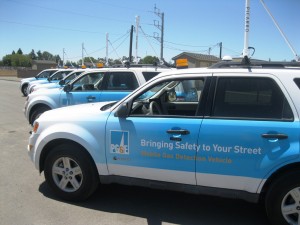 As it continues to work to regain the public’s trust, and become the safest natural gas utility in the nation, Pacific Gas and Electric Co. (PG&E) recently announced that by the end of the year, the company will have replaced all 2,243 miles of its cast iron gas distribution pipe, which is prone to leaks.

By replacing the pipes, with more modern materials, PG&E is one of the first utilities of comparable size and age to complete such an action. The company, which already ranks in the top 10 percent nationally in maintaining a small number of minor leaks in its backlog, also committed to achieving a near-zero backlog by the end of the year.

These efforts are part of PG&E’s comprehensive program to identify, fix and prevent natural gas leaks to enhance public safety, and will also advance the company’s ongoing commitment to protecting the environment and creating jobs.

PG&E operates the second largest gas transmission and distribution system in the country and has made significant progress in accelerating leak repair and prevention across its 80,000-mile natural gas system. By the end of 2013, PG&E’s innovative gas safety commitment led to a 99 percent reduction of minor leaks, from 12,500 to only 150. Addressing minor leaks in their backlogs are common challenges for utilities across the United States, but by implementing the an “all of the above” approach to finding, fixing and preventing gas leaks, PG&E was able to make industry-leading progress.

“We are using all of the resources at our disposal to find and fix leaks on our gas system,” said Nick Stavropoulos, executive vice president of PG&E’s Gas Operations. “We’re giving our crews state-of-the-art tools and technology and enhancing the way leak survey and repair work is performed using a bundled methodology. This aggressive and proactive approach allows us to accelerate the repairs of even more minor, non-hazardous leaks that pose no threat to safety, but may contribute to global warming.”

The successful leak detection program is made possible by investments in the latest technologies, such as PG&E’s state-of-art gas control center, opened last year. Additionally, PG&E was the first utility in the country to test, pilot and deploy a car-mounted leak detection system 1,000 times more sensitive than traditional equipment, providing the ability to identify leaks faster and more efficiently. The company is also using enhanced pipeline inspection technology, such as camera-equipped robots, and giving employees enhanced training and skills to help prevent leaks.

Upgrading pipeline infrastructure and fixing gas leaks has the added benefit of reducing the release of methane—a powerful greenhouse gas—into the atmosphere. Earlier this year in the official Climate Action Plan, the White House credited PG&E as one of five members of the Natural Gas Downstream Initiative, a collaborative approach focused on reducing methane leaks through modernization and technology.

Through a separate collaboration, PG&E, along with several other gas utilities and the American Gas Association have partnered in a national study conducted by the Environmental Defense Fund with Washington State University to measure gas emissions from utility distribution pipelines. The findings are expected to be published later this year.

In order to meet these commitments, the company continues to invest in building a skilled workforce. As a major employer in California with more than 20,000 employees, PG&E is stepping up efforts to recruit military veterans through its signature PowerPathway workforce training program – focused on finding a place to apply the leadership skills and experiences U.S. veterans learned in the military.