... Permian, We Have a Gas Problem - North American Energy Pipelines

Permian, We Have a Gas Problem

The Permian Basin is experiencing its first natural gas problem. Gas production is starting to exceed pipeline capacity exiting the production region, and in-basin prices are falling as a result. Paradoxically, the second problem is a potential overreaction to the first: market fundamentals could attract too many pipelines, running the risk of having underused pipelines.

Permian gas prices will remain weak for the next few years despite nearly 2 billion cubic feet per day (Bcf/d) of additional pipeline capacity coming online by 2020. This is because the Permian, predominantly a shale oil play, has large quantities of associated gas production. McKinsey Energy Insights (MEI) expects Permian crude and natural gas liquids (NGL) production to grow from 3.3 million barrels per day (bpd) in 2017 to 8.8 million bpd by 2025 — which in turn is expected to cause natural gas production to rise from 7.1 to 16 Bcf/d over the same time frame.

The Texas Gulf Coast and, to a lesser extent, Mexico are the most likely destinations for incremental Permian gas volumes. While the fundamentals support additional pipelines (i.e., large quantities of new gas being produced), there is a real risk that the Permian will become over-piped in the medium to long-term. As private equity looks to fund the next major pipeline project, they will be increasingly drawn to projects linking the Permian to demand centers in the Gulf Coast. This is because pipelines typically offer stable revenue, and the regulatory risk is minimal in an oil and gas friendly state like Texas. Combining favorable fundamentals, minimal regulatory risk and private equity, it’s possible that too much capacity will be developed in the long term.

For all the excitement the Permian basin enjoys, it poses a major problem to gas markets. Depending on the year, an increase in oil production due to oil prices rising USD 10/bbl would also cause associated gas production from the Permian to increase by 1-2.5 Bcf/d. With sufficient gas pipeline capacity, this inexpensive associated gas would displace gas from other basins, causing U.S. gas prices to drop by about USD 0.10/mmbtu.

If pipeline usage exiting the Permian remains below 80 percent, in-basin gas prices are expected to be about USD 0.10/mmbtu cheaper than on the Texas Gulf Coast, because of the variable cost of transporting the gas (see Exhibit 1, D). Once pipeline usage exceeds 80 percent, in-basin prices start to decrease as Permian gas competes with other gas for access to limited pipeline capacity, causing in-basin prices to fall further. The Permian has already crossed that 80 percent threshold, and prices are starting to show the effects. 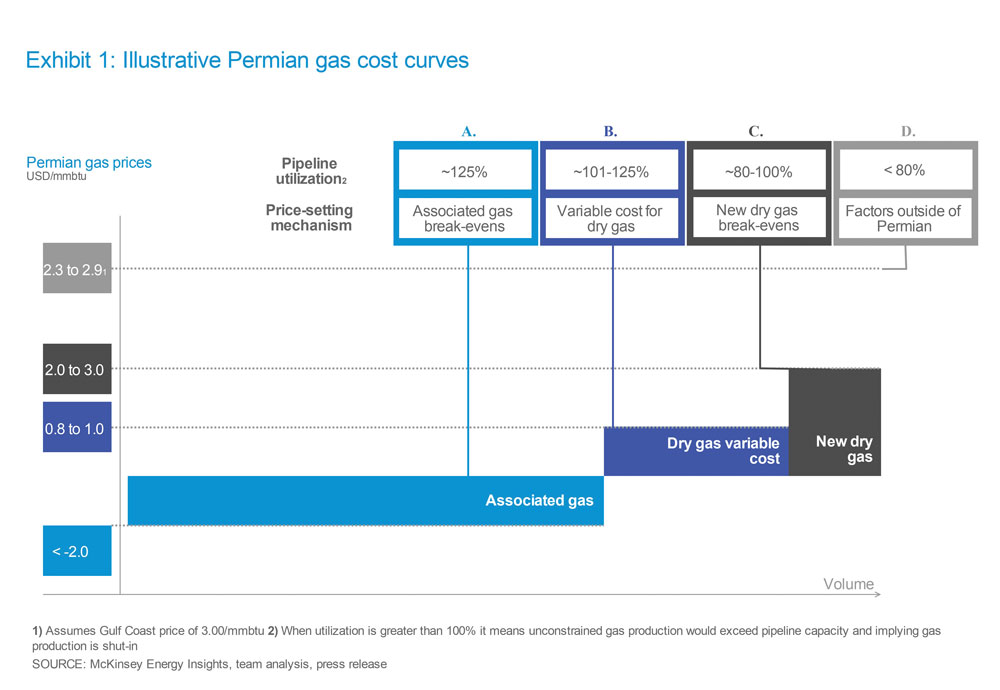 This scenario would usually result in operators reducing gas drilling, but only approximately a quarter of Permian gas production is not associated with oil and is sensitive to in-basin gas prices. If in-basin gas prices fall, the first to be affected will be the less than 5 percent of production that comes from new gas wells, which have a breakeven of between about USD 2-3/mmbtu (see Exhibit 2, C). Next would be the estimated 25 percent of Permian production from gas wells that have already been drilled, which break even at about USD 0.80-1.00/mmbtu (see Exhibit 2, B). The remaining 75 percent of gas production is associated with oil, and can even have a negative value, as oil revenue is what drives investment decisions for those wells (Exhibit 1, A). Since this associated gas is largely unaffected by in-basin gas prices, we can expect to see Permian gas production continue to increase even as the takeaway capacity approaches 100 percent. 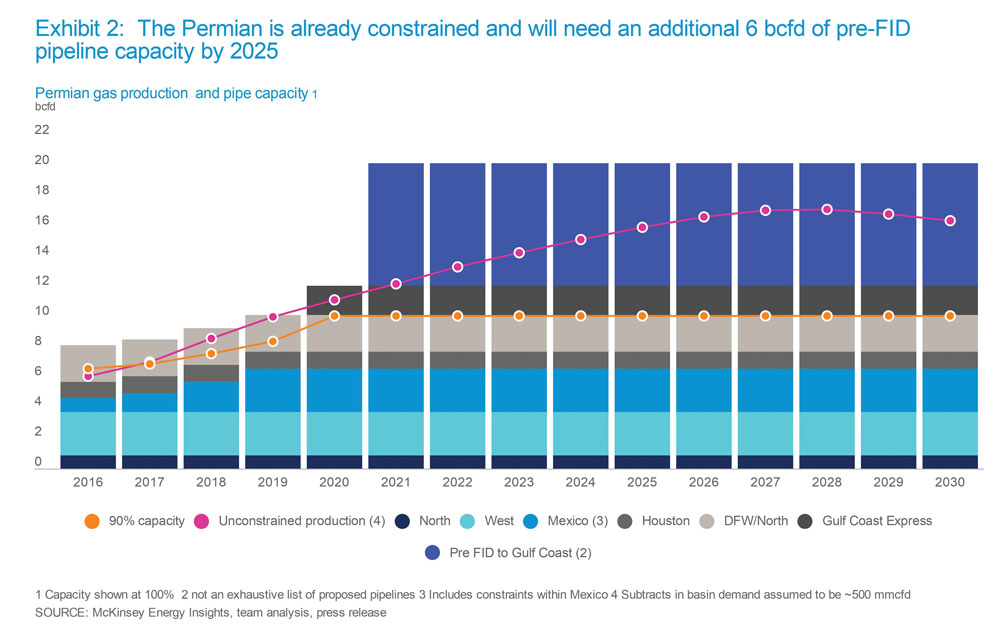 There are two primary destinations for incremental Permian gas: Mexico and the Gulf Coast. Once bottlenecks are resolved, new pipelines to Mexico should add an effective export capacity of about 2.9 Bcf/d, a much-needed outlet until new pipelines to the Gulf Coast come online in 2020. The other destinations for Permian gas are to the west and north. However, both routes face problems. Building additional pipelines to the west is difficult, especially in California, while western gas demand is uncertain due to higher solar generation. Meanwhile, competing volumes from the Marcellus and SCOOP/STACK shale plays, as well as higher pipeline development costs for long-distance interstate pipelines, makes building a pipeline to the north less attractive.

Too Much of a Good Thing?

In other areas, anecdotal evidence indicates private equity money competing against itself, causing the required returns to fall. Additionally, Appalachia provides a good example of how excess pipeline can develop in response to wide basis differentials. (MEI models indicate there is more pipeline capacity exiting Appalachia than production until after 2026.)

Most of the proposed new pipelines linking the Permian to the Gulf Coast would be regulated as an intrastate (i.e., within Texas) pipeline and are generally easier to permit and build compared to interstate, or even northeastern interstate pipelines. Furthermore, private equity companies are increasingly attracted to stable pipeline revenues — especially when those pipelines are in an energy-friendly state like Texas, where a pipeline can be expected to come online 12-18 months after FID. As a result, it is more likely in the long term that excess new pipeline capacity will be built from the Permian to the Gulf Coast rather than too little.
LNG to Provide Added Demand

Assuming there is sufficient pipeline capacity, high oil prices may not depress prices in the Permian as much as expected. This is because a USD 10/bbl increase in oil price leads to an increase of about USD 1.20/mmbtu in oil-linked liquefied natural gas (LNG) — assuming a 12 percent slope — with no direct impact on Henry Hub-linked LNG prices. From 2020 to 2024, MEI expects about 2 Bcf/d of surplus capacity at U.S. LNG export terminals. If oil prices were to increase due to a decrease in Venezuelan crude oil production or some other unforeseen shock, then oil-linked LNG contracts would become more expensive. Demand for U.S. LNG would become more price competitive and provide an outlet for additional associated Permian gas. The Permian is in a unique position. High oil prices lead to additional gas production and put downward prices on in-basin gas prices. The Permian’s gas problem can be divided into two phases. The first phase is from now until about 2020 where there is insufficient pipeline capacity and in-basin prices are low. Despite building nearly 2 Bcf/d of additional pipeline capacity by 2020, additional capacity is needed. This leads to the second phase. Market fundamentals may attract too many pipelines, and the Permian is at risk of becoming over-piped.

Jamie Brick is a specialist at McKinsey Energy Insights, which represents the analytical and business intelligence arm of the global management consulting firm McKinsey & Co.’s oil and gas practice.