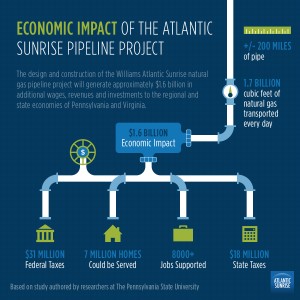 A study authored by researchers at Pennsylvania State University finds that the Williams Atlantic Sunrise natural gas project will generate approximately $1.6 billion in additional wages, revenues and investments to the regional and state economies of Pennsylvania and Virginia.

“Economic Impacts of the Atlantic Sunrise Pipeline Project,” lead author Seth Blumsack, associate professor of Energy Policy at Penn State, finds that the proposed project would have a major, positive economic impact on the Pennsylvania and Virginia economies where new pipeline facilities would be built and operated.

According to the researchers, the design and construction of the Williams Atlantic Sunrise pipeline project could support approximately 8,000 jobs and an associated $870 million in economic value added during the construction period. Additionally, the ongoing operation of the pipeline would generate approximately $1.9 million in annual economic impact, supporting 29 jobs.

The economic modeling exercise was funded by Williams and uses IMPLAN, a widely used commercial software designed to perform input-output economic analysis, to estimate impacts on workforce demands, economic output and value added to each of the counties where construction is expected to occur. IMPLAN is used by state governments across the nation for economic modeling and predicting.

In a related report, “Estimating the Impact of the Atlantic Sunrise Project on Natural Gas Consumers,” lead author Andrew Kleit, professor of Energy and Environmental Economics at Penn State, found that consumers served by the Transco pipeline in the southeast and Mid-Atlantic regions could have saved $2.6 billion from 2012-2014. This is due to increased access to lower-priced Pennsylvania gas supply because of Atlantic Sunrise.

“Penn State’s report clearly shows how vital this project and others like it are for Pennsylvania’s economy,” said Gene Barr, Pennsylvania Chamber of Business & Industry president. “We need to take advantage of all of our natural resources, and the best way to do that is through more gas infrastructure. The Atlantic Sunrise expansion to the Transco pipeline is projected to support thousands of jobs during construction and thousands more in the drilling and supply chain industries. All told, we are looking at the potential for more than a billion dollars of economic activity as a result of this project.”

Key findings from the analysis include:

“Construction and ongoing operations of the project look to be economically beneficial to the counties the pipeline would cross, as well as to Pennsylvania and the region,” said Seth Blumsack, associate professor, John and Willie Leone Family Department of Energy and Mineral Engineering, Pennsylvania State University.

The Atlantic Sunrise project is a proposed expansion of the existing Transco natural gas pipeline, which currently transports about 10 percent of the nation’s natural gas. The Atlantic Sunrise project would add about 200 miles of new pipe to expand and extend the reach of the existing Transco pipeline to northeastern Pennsylvania, transporting about 1.7 billion cubic feet of clean, natural gas per day – enough to serve approximately 7 million homes.

“Anyone who has experienced a spike in their heating bills understands the importance of this project. There is a critical need for additional pipeline capacity in the region so that northeastern consumers can realize the full benefit of lower-cost energy,” said Frank Ferazzi, Transco general manager.