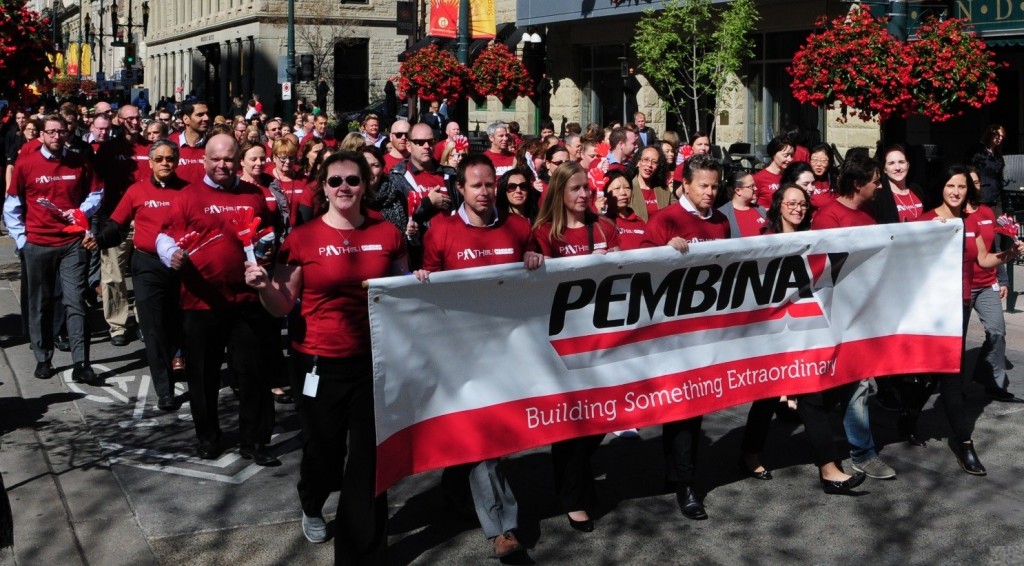 Pembina Pipeline Corp. raised a record $2.6 million – the largest contribution in Pembina’s history – for United Ways across its operating areas. United Way of Calgary and Area will receive a donation of $2.32 million (including Pembina’s 100 percent match), the result of the Company’s annual staff fundraising campaign. Further, Pembina will be donating approximately $300,000 to United Ways in its operating areas once the company’s field office campaigns have wrapped up.

“Pembina Pipeline’s 91 percent employee engagement rate for their United Way campaign is an example of what it looks like when the best happens,” said Lucy Miller, president and CEO of United Way of Calgary and Area. “Their generous donation of more than $2.3 million will directly improve the lives of Calgarians. More kids will graduate from high school, more people will achieve financial stability and more communities will thrive. The city is grateful for their support.”

Employees, contractors, board members and retirees from Pembina’s Calgary office came together to raise funds through pledges and activities, including a mini-sticks hockey tournament, fun money casino night, silent auction and an Executive game show, with 91 percent of employees participating in the campaign. All funds raised were then fully matched by Pembina.

Fun and games aside, Pembina staff also volunteered their time and energy to give back to the Calgary community through ˈDays of Caringˈ activities. Pembina volunteers served a meal at the Calgary Drop-In and Rehab Centre and spent an afternoon reading to students at Guy Weadick Elementary School through the Calgary Reads program.

“We recognize that this has been a difficult year across the energy industry and in the Calgary community, and we are proud to see so many people at Pembina stepping up to lend a hand to their neighbours in this time of need,” explains Mick Dilger, Pembina’s president and CEO and the 2015 co-chair of the United Way of Calgary’s Major Giving Cabinet. “We’ve been a strong supporter of the United Way for over 30 years, an organization we feel is integral to the Calgary community and is able to direct funds towards the areas of greatest need within our city.”

Pembina also supports the United Way in communities across its operations, through its British Columbia, Alberta and Ontario offices. Many of these field office campaigns will continue into the holiday season, with final tallies coming in closer to the end of the year.

Pembina’s Commitment to Investing in Communities

Pembina’s community investment program supports non-profit and charitable organizations that are based in, or support, the communities where they operate. Within this framework, Pembina’s investment decisions and partnerships are focused on initiatives that improve access to education, protect or preserve the environment, promote safety, create community space, and encourage recreation and a healthy lifestyle.