The cover of our eighth annual Big Equipment Handbook is a work of art — literally. We asked our lead graphic artist Joan Satow to apply her painting skills to a pipeline jobsite, and she delivered the striking watercolor that graces the front of this magazine.

Satow joined Benjamin Media Inc., the parent company that publishes North American Oil & Gas Pipelines, in February 2014, and she immediately began working on the layouts for our pipeline stories. However, her career in graphic design dates back to 1987, when she began working at an advertising agency and “cut and paste” meant a lot more work than a few clicks of the mouse. 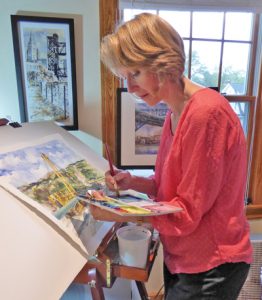 Satow’s interest in watercolor came a few years later, when she spotted an ad in her local newspaper. She had taken drawing and painting classes at Ashland College, but she mostly worked with acrylic paint. Watercolor was a whole different medium, and she loved it.

“At that time, I needed a break from the computer [working on freelance jobs]. I needed to get out of the house,” she remembers. “I saw an ad in the Sun News for evening watercolor classes. The instructor was also a graphic designer. The rest is history. I loved it, and I kept going back.”

Today, Satow is an active member of the art community in Northeast Ohio, and she was accepted into the 2017 Ohio Watercolor Society exhibit. Her typical subject matter is more nature oriented, but she also paints a variety of other scenes, such as train bridges around Cleveland, freighter ships along the Cuyahoga River and more urban landscapes.

“I like to mix it up,” she says. “I don’t like to pigeonhole myself as an artist. I like a good challenge, and I’ll try a portrait every once in a while. The pipeline painting was like that, sort of off the beaten path of my normal paintings. There was some nature to it, but it also was kind of panoramic. It had some good depth to it.”

For the cover of the Big Equipment Handbook, Satow worked from a jobsite photo provided to us by Marathon Pipe Line. She started by drawing the image and plotting the general layout for the painting, a process she likened to her normal graphic design work.

“With graphic design, you really have to plan out how the image will fit on the page,” she says. “You have to allow room for the headline and other text. It all has to work together as an interesting layout without compromising the quality of the art or the quality of the text. You have to leave enough space to appreciate both.”

Satow says most people tend to think of watercolor as being “drippy” and loose, but she explains how she got such intricate detail with the pipelayer.

“It’s kind of cool to be able to contrast that loose look of the background and the tightness of detail in the machine,” she says. “You have to plan out whatever detail the section will need, knowing that will be your main focus. And then you have to layer the paint on top, and then get more detail with a finer brush.”
One of the trickier obstacles of creating the cover was figuring out whether to paint to the dimensions of the magazine or a fuller scene. In the end, Satow rendered a wider view and cropped the image for the cover.

“It was a cool challenge,” she says. “It’s nice to go outside my usual subject matter for a painting. Maybe it’ll open the eyes to get people think differently about what watercolor can be.” 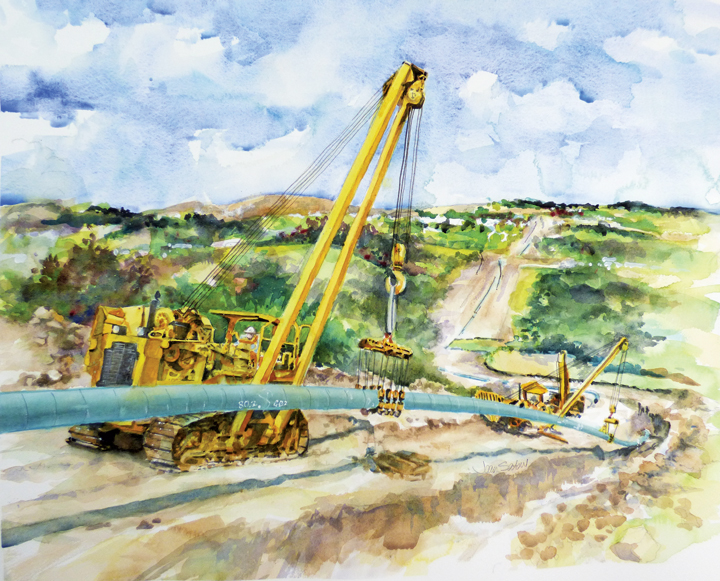 The painting that graces the cover of our eighth annual Big Equipment Handbook.