A subsidiary of Oryx Midstream Services LLC has launched a binding open season for a new crude oil pipeline system in the Delaware basin in Texas.

Oryx Southern Delaware Oil Gathering and Transport LLC is seeking to obtain volume commitments and/or acreage dedications to support the development of the Oryx Trans Permian pipeline system (OTP), a gathering and transportation system to serve the liquids-rich southern Delaware Basin in Texas. The binding open season will run until Oct. 29. 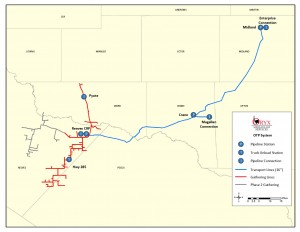 A map of the Oryx Trans Permian pipeline system.

The OTP system is currently supported by five anchor shippers that collectively will dedicate approximately 220,000 operated acres with an area of mutual interest covering more than 1 million acres. Spanning portions of Reeves, Ward, Pecos, Crane, Upton and Midland counties, the OTP system will have an initial capacity of 160,000 barrels per day (bpd) with the capability to be expanded to up to 220,000 bpd based on customer demand.

To support volumes for the current anchor shippers, the system is expected to include more than 300 miles of gathering pipeline, 100 miles of 16-in. transmission pipeline and three storage terminals with 300,000 barrels of leased or owned working storage capacity.

The terminals will be located near the Texas towns of Pecos, Crane and Midland. The OTP system will provide access to two major interconnects with delivery into Magellan’s Longhorn Pipeline and Enterprise’s Midland Terminal, providing shippers with multiple takeaway options that will reduce congestion in the region and create multiple market opportunities. The system also will have several strategically located truck unloading stations to facilitate the movement of trucked production in the area.

“With multiple production zones providing years of drilling inventory, the southern Delaware Basin is expected to experience growing volumes and a significant need for additional takeaway capacity. Oryx’s robust OTP pipeline system provides our customers with flexibility, improved flow assurance and multiple market choices, allowing them to fully maximize the value of their production,” said Brett Wiggs, CEO of Oryx Midstream Services. “As a Midland-based team, the Permian Basin is our focus, and we look forward to continuing to expand upon our relationships in the area and offering our customers an even broader scope of midstream solutions.”

Construction has begun on the OTP system and will be completed in two phases. The first phase with service to Crane is expected to be operational by early first quarter 2016, and the second phase with service to Midland is expected to be operational by the second quarter of 2016. Oryx plans to design and construct the OTP system to accommodate all requests for service pursuant to the terms of the open season.

The binding open season process provides potential shippers with the opportunity to make volume commitments or acreage dedications to the OTP system by executing long-term transportation contracts with Oryx. Shippers that elect to make long-term commitments to the OTP project during the open season will receive firm transportation service for their committed volumes.