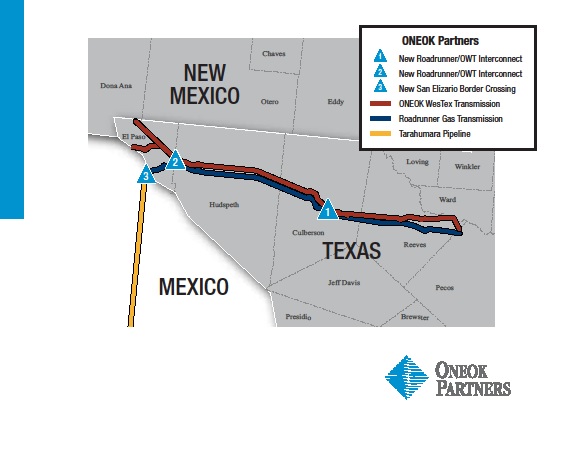 ONEOK Partners and a subsidiary of Fermaca Infrastructure B.V. have entered into a 50-50 joint venture to construct a pipeline that would transport natural gas from the Permian Basin in West Texas to Mexico.

“We are pleased to partner with Fermaca on this strategic pipeline project and about the opportunity to add to our extensive 36,000-mile integrated network of natural gas and natural gas liquids pipelines,” said Terry K. Spencer, president and CEO of ONEOK Partners.

The project, to be constructed in phases, includes approximately 200 miles of new, 30-in. diameter pipeline currently designed to transport up to 640 million cubic feet per day (MMcf/d) of natural gas, with up to 570 MMcf/d to be transported to Mexico’s growing markets. Precedent Agreements representing the initial design capacity have been executed with the Comisión Federal de Electricidad (CFE), Mexico’s national electric utility, and a subsidiary of Fermaca.

All transportation agreements will be firm (take-or-pay) and have a term of 25 years. Roadrunner was fully subscribed in its initial design through an open season process that ran from Dec. 2, 2014, to Dec. 26, 2014. Additional capacity could become available through future expansions depending on the demands of the market.

“ONEOK Partners’ strategically integrated assets position us well to provide this service to the CFE and the expanding natural gas markets in Mexico. We look forward to building a long-term, strategic relationship with the CFE and to this project meeting the ongoing demand needs of the large natural gas consumers in Mexico,” added Spencer.

“We see Roadrunner as a gateway asset that will connect Mexico’s rapidly growing natural gas markets with U.S. producers in the developing Permian Basin. The pipeline will connect with ONEOK Partners’ extensive existing natural gas pipeline and storage infrastructure in Texas and create a platform for future cross-border development opportunities. These integrated assets also will provide markets in Mexico access to upstream supply basins in West Texas and the Mid-Continent, which adds location and price diversity to their supply mix and helps CFE replace fuel oil-based power plants with natural gas-fueled power plants, which are friendlier on the environment and less expensive,” concluded Spencer.

“The signing of this joint venture agreement with ONEOK Partners is another key step in Fermaca’s plans to extend its network of gas pipelines across Mexico and into the U.S.,” said Manuel Calvillo Alvarez, chief operating officer and executive vice president of Fermaca. “A confluence of factors, including ambitious growth targets, a favorable regulatory and political framework, and an abundance of planned projects mean that it is a great time to be investing in the build-out of natural gas infrastructure in and around Mexico. In ONEOK, we have found a partner that recognizes the Mexican opportunity, and we really look forward to working with them.”

ONEOK WesTex Transmission is an intrastate natural gas pipeline system operating within Texas, consisting of approximately 2,227 miles of pipeline. This project is subject to receipt of customary governmental approvals.