ONEOK Partners LP has boosted its pipeline footprint in the Permian Basin with an agreement to purchase two major gathering systems in New Mexico and Texas. The company will acquire the natural gas liquids (NGL) pipelines and related assets from affiliates of Chevron Corp. for approximately $800 million, according to an Oct. 27 statement.

The transaction includes an 80 percent interest in the West Texas LPG Pipeline and 100 percent interest in the Mesquite Pipeline, which collectively consist of approximately 2,600 miles of NGL gathering pipelines extending from the Permian Basin in southeastern New Mexico to East Texas and Mont Belvieu, Texas. Following the closing of the transaction, ONEOK will be the operator of both pipelines. The remaining 20 percent of West Texas LPG is owned by Martin Midstream Partners LP. 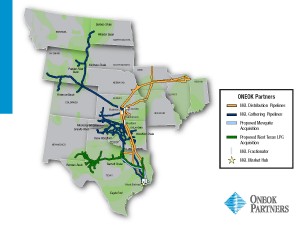 ONEOK will acquire an interest in the West Texas LPG and the Mesquite pipelines, which consist of approximately 2,600 miles of NGL gathering pipelines from the Permian Basin in southeastern New Mexico to East Texas and Mont Belvieu, Texas.

“With this acquisition, along with other announced capital-growth projects in North Dakota, Oklahoma and Wyoming, the partnership’s total investment has increased by more than $3 billion in the last year,” said ONEOK Partners president and CEO Terry K. Spencer. “Acquiring these natural gas liquids pipelines allows us to continue to serve producers in the Permian Basin and other multiple high producing NGL-rich basins, including the Williston Basin, the Powder River Basin and the Cana-Woodford and SCOOP plays in Oklahoma. The partnership’s presence in the Permian Basin now is significantly stronger, and this acquisition establishes a new geographic region for natural gas liquids volume growth.”

The Permian Basin, located in southeastern New Mexico and western Texas, is the largest crude-oil and natural gas producing basin in the United States — three times larger than the Bakken Shale in North Dakota. This basin encompasses 15 million acres and has multistacked producing formations with approximately 500 rigs currently operating across the region, resulting in significant growth of crude oil, NGLs and natural gas production.

These assets will increase the partnership’s NGL gathering system by more than 60 percent to nearly 6,900 miles of NGL gathering pipelines. As a result of this acquisition, ONEOK Partners’ gathered NGL volumes are expected to increase nearly 40 percent to approximately 800,000 barrels per day (bpd) system wide, providing the partnership’s NGL infrastructure with access to a new NGL supply basin.

The company’s ownership West Texas LPG and Mesquite pipelines will add approximately 230,000 bpd of unfractionated NGL supply to the its expanding NGL systems. The pipelines access NGL supply from producers actively developing the Delaware, Midland and Central basins in the Permian, in addition to the Barnett shale, East Texas and north Louisiana regions.

ONEOK Partners’ unfractionated NGL capacity in the acquired system is expected to increase to 310,000 bpd through expansions based on expected producer commitments.

“This strategic acquisition immediately establishes ONEOK as a significant NGL service provider in the Permian Basin,” Spencer said. “We are adding another rapidly growing producing region to our operating footprint, which will create integration and expansion opportunities for the partnership by connecting these assets to our existing NGL fractionation and storage facilities in Mont Belvieu.”

These assets are expected to generate approximately $40 million in annual earnings in 2014 with significant growth potential. After the completion of this transaction, ONEOK expects its share from these assets to more than double by 2017 through capacity-expansion opportunities, capacity upgrades, bundled services and integration into the partnership’s existing systems.

ONEOK Partners expects to close the transaction in the fourth quarter 2014. Closing is subject to customary conditions including antitrust clearance from the Federal Trade Commission under the Hart-Scott-Rodino Act. Financing for this transaction is expected to come from available cash on hand or borrowing under the company’s existing $1.7 billion commercial paper program or existing $1.7 billion credit facility.

ONEOK Partners will offer jobs to all of the approximately 75 employees working for West Texas LPG and Mesquite affected by this transaction.

Between 2010 and 2016, ONEOK has announced total investments of approximately $8.3 billion to $9 billion for acquisitions and capital-growth projects related to natural gas gathering and processing, and natural gas liquids, which includes the West Texas LPG and Mesquite pipelines.

After this announcement and the recent announcements of the Bear Creek and Bronco natural gas processing plants and related infrastructure in North Dakota and Wyoming, the company continues to have a $3 billion to $4 billion backlog of unannounced growth projects that it continues to evaluate.