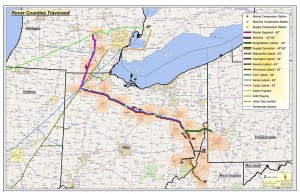 When complete, the Rover Pipeline will extend 711-miles.

The project will primarily serve domestic consumers by transporting natural gas from the rapidly expanding Marcellus and Utica shale production areas to U.S. markets in the Midwest, Great Lakes and Gulf Coast regions of the United States.

Rover Pipeline is currently placing orders for key components needed for the construction of pipeline from Ohio-based companies including Ariel Corp., Industrial Piping Specialists and Emerson Process Management. These orders include parts used for piping, compression, steel, and bearings, along with construction contractors, and pipeline workers.

“We are pleased to be a part of the Rover Pipeline project and to be able to provide jobs for Ohio citizens who will be responsible for the design, manufacture, and support of the compression equipment Rover needs for the project,” said Robert Drews, director of marketing for Ariel Corp., of Mt. Vernon, Ohio. “We are committed to supporting Ohio’s natural gas infrastructure, and local economies in Ohio.”

In addition to the supplies Rover Pipeline will purchase from Ohio-based companies, construction of the pipeline will help others throughout the state. The project is estimated to create approximately 6,500 construction jobs in Ohio. The spending power of these individuals at local restaurants, laundromats, grocery and convenience stores, pharmacies, and more, creates tremendous economic benefit to the cities and towns along the route.

Rover Pipeline also estimates that more than $90 million will be paid directly to landowners for easements in Ohio, and approximately $135 million in ad valorem taxes in Ohio the first year the pipeline is in service. Ad valorem taxes are paid annually.

“Rover’s commitment to buying locally will have a number of tangible benefits. First and foremost, the project will provide domestic, long-term access to the natural gas that powers our homes and businesses,” said Gordon M. Gough, president and CEO of the Ohio Council of Retail Merchants. “Furthermore, there is a strong secondary benefit for Ohio retailers, with increased visits from current customers and new customers.”

Pending regulatory approval, Rover Pipeline is expected to be in service from the production areas to the Midwest Hub near Defiance, Ohio, by the end of 2016, and from the Midwest Hub to markets in Michigan and the Union Gas Dawn Hub by mid-2017.