“Sing in me, Muse, and through me tell the story of that man skilled in all ways of contending, the wanderer, harried for years on end, after he plundered the stronghold on the proud height of Troy.”

A year ago, in our overview of the pipeline and distribution market we described that “the U.S. pipeline market will not return until the price of oil moves back above $55; the Canadian pipeline market needs prices closer to $70 … neither of which can happen until a combination of global, U.S. and Canadian economic growth accelerates.” We stand by this prediction, yet Donald Trump will be sworn in as the 45th U.S. president by the time you read this. Like a victorious Odysseus, fresh off the sacking of Troy, he will embark on a four-year odyssey … perhaps as challenging as the story of Odysseus’ journey home.

Like Odysseus and his crew, there is both worry and optimism as we board the ship of state and set sail. Will our “Constructor in Chief” build jobs through energy and infrastructure spending or strand us with forgetfulness of the lotus eaters? Strap yourself to the mast because we are in for quite a voyage.

The Trump administration inspires optimism in the energy, infrastructure and construction industries. His American jobs mantra fits perfectly with using energy policy, infrastructure rebuild, etc., as a job creation engine. The pipeline market is not currently cooperating and we see the following set of characteristics that defined the current market: 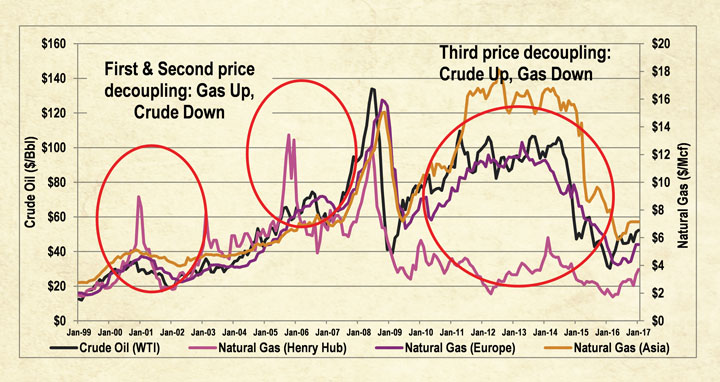 While the pipeline market has been punished by low commodity prices since 2015, the distribution construction market is largely disconnected from exploration and production impact. A low natural gas price actually creates more demand for distribution construction services. Long-term, the prospects for both the pipeline and distribution markets are solid and will continue to exhibit growth. We still face many challenges in both markets. Regulation and protest in the pipeline space will serve as
an obstacle and as the pipeline market returns to health in 2017-2018, we will again face workforce availability issues for the pipeline market. In the distribution market, the availability of skilled workforce and supervisory personal is the greatest challenge. We do, however, have high paying jobs, clear career progression, superior skill development and training, innovative technologies in many jobs, and an entrepreneurial culture. Each aspect is largely unknown and unobserved outside of our industry. It is time we stopped hiding our light under a bushel and sing like the sirens to draw talented individuals to the shores of our industry.

Economically, Canada exited its short 2015 recession in early 2016 and GDP growth for 2016, while positive, is well below 2 percent and the forecast for 2017 is at a similar level. Canada is an export based economy and the slow global growth and resulting low commodity prices hurts Canada more severely than the United States. Ultimately, Canada needs faster global growth and high commodity prices to thrive.

The U.S. pipeline and distribution market is much more diversified than Canada and the pipeline portion of this market is a smaller percentage and has multiple drivers depending on the commodity, geography, and nature of the assets. That being said, U.S. pipeline contractors are still suffering. The 2016 slow rise in the price of oil, the OPEC production agreements, support from Trump for energy infrastructure, and a more aggressive and hopefully long-term energy policy will improve the gas/liquid pipeline market. The improvement, however, will not be realized until 2018/2019 due to the engineering, planning, land acquisition and permitting timeline associated with pipeline infrastructure.

In Exhibit 3, our 2015 and 2016 spending forecast for pipeline and distribution activity has seen a reduction of approximately 12 percent giving back much of the 2013-2014 gain that was achieved during the peak in commodity prices. The typical U.S. pipeline contractor saw revenues fall between 40 percent and 60 percent since the 2013-2014 peak. Station and maintenance contractors are less affected by these changes. The distribution markets remain strong and we anticipate continue growth in 2017 and beyond with a peak in 2018. One caveat: the general economy has expanded since 2010 and we are approaching the 7th year of this expansion where the typical business cycle runs 5-7 years. All cycles end with a recession, the only question is when. We are currently forecasting a short and shallow recession in late 2018 that will dampen 2019 growth but not stop it. Beyond 2019, the pipeline market will continue to exhibit periodic volatility and we remain very bullish over the next 15-20 years of opportunities in both the distribution and pipeline space.

Looking forward, we see shifts in the nature of the work that is occurring from broad accelerated asset replacements to more general modernization, and integrity related programs but no shift in total spending. This shift will require contractors to take a hard look at their service offerings, better understand where their customers are headed and then decide if they want to follow the spend patterns of their customers or potentially search for new customers with whom their current capabilities fit.

Will the Trump ship of state and our “Constructor in Chief” bring us home safely or will we wander like Odysseus and his crew only to face endless challenges in the pipeline and distribution construction sector? We are on the side of optimism and predict that the next 2-4 years of spending will be several of the best in the overall US and Canadian liquid/gas pipeline and gas distribution construction markets.

Our greatest challenges are regulation, environmental protest, and the present question of “Who Will Do the Work?” Regulation and environmental challenges are becoming more aggressive and thoughtful owners, contractors, and designers will work with stakeholders to find solutions that create high wage jobs, comply with regulation, and protect the environment. Building a workforce to complete 15-20 years of potential work is perhaps a larger challenge and we are aware of a substantial effort to help meet this challenge led by the Underground Construction Workforce Alliance (UCWA), an industry collaboration, kicked off by the Distribution Contractors Association (DCA — dcaweb.org). This group is undertaking the hard work and building local resources where the shortages are and have set up a pilot effort in central Ohio to touch the gathering market of the Utica shale, and the distribution territories of Dominion, Duke, NiSource, and Vectren. This local focused effort is designed to build solutions to meet the workforce demands in high priority shortage markets. You can join these efforts, simply contact the associations.

Homer closes The Odyssey with Athena calling out to Odysseus to stop fighting his countrymen. Like Athena who brings peace, alignment and collaboration, we trust that Donald Trump as our “Constructors in Chief” will achieve the same result and lead an expansion in pipeline and distribution construction activity.

Mark Bridgers and Dan Campbell are consultants with Continuum Capital, which provides management consulting, training, and investment banking services to the worldwide energy, utility and infrastructure construction industry. They can be reached at (919) 345-0403 or MBridgers@ContinuumCapital.net and followed on twitter at @MarkBridgers. For more information on Continuum, visit continuumcapital.net.