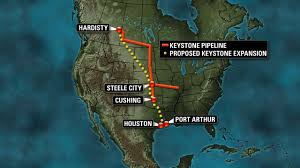 After seven years of federal review, TransCanada Corp. is now left to weigh its options, including filing a new application for a presidential permit for the Keystone XL project, following President Barack Obama’s rejection of the project.

Obama announced the rejection Nov. 6 after Secretary of State John Kerry informed him that the State Department, after extensive public outreach and consultation, decided the Keystone XL pipeline would not serve the national interests of the United States. In his statement, the president noted that the pipeline would not make a meaningful long-term contribution to our economy, would not lower gas prices for American consumers and shipping dirtier crude oil into our country would not increase America’s energy security.

“Now, for years, the Keystone Pipeline has occupied what I, frankly, consider an overinflated role in our political discourse. It became a symbol too often used as a campaign cudgel by both parties rather than a serious policy matter,” Obama said. “And all of this obscured the fact that this pipeline would neither be a silver bullet for the economy, as was promised by some, nor the express lane to climate disaster proclaimed by others.”

The decision did not set well with TransCanada, the American Petroleum Institute (API) or Association of Oil Pipe Lines (AOPL) all of which released statement lamenting the president’s decision.

“Today, misplaced symbolism was chosen over merit and science – rhetoric won out over reason,” said Russ Girling, TransCanada president and CEO. “The U.S. consumes over seven million barrels per day more oil than it produces and will continue to do so for decades, even despite U.S. oil production increases. It is disappointing the administration appears to have said yes to more oil imports from Iran and Venezuela over oil from Canada, the United States’ strongest ally and trading partner, a country with rule of law and values consistent with the U.S.”

The president’s decision comes less than a week after TransCanada requested that the State Department pause its review of Keystone XL based on the fact that the company had applied to the Nebraska Public Service Commission for approval of a new route. The State Department rejected the request.

“It’s ironic that the administration would strike a deal to allow Iranian crude onto the global market while refusing to give our closest ally, Canada, access to U.S. refineries,” said Jack Gerard, API president and CEO. “This decision will cost thousands of jobs and is an assault to American workers. It’s politics at its worst. Unfortunately for the majority of Americans who have said they want the jobs and economic benefits Keystone XL represents, the White House has placed political calculations above sound science.”

In his remarks, Girling noted that through the course of its review, the State Department issued five very comprehensive and balanced scientific reviews of Keystone XL since 2010.Those reviews proved that Keystone XL is the safest, most environmentally sound way to transport needed energy to Americans.

“The president rejected a real opportunity to create jobs and take advantage of the safest way to transport the energy America needs,” said Andrew Black, president and CEO of AOPL.

“Counties and communities will no longer have access, annually, for the life of the project, to hundreds of millions of additional dollars in revenue generated from taxes paid by a company that has already injected almost $200 million in tax revenue into communities along the existing Keystone route,” Griling said.

The AOPL release broke that down further: Keystone XL would support 6,800 construction jobs, 4,600 manufacturing jobs, 4,400 jobs in trade, 2,200 jobs in finance and insurance, 5,100 jobs in other professional services, 2,700 jobs in health services and 5,700 jobs in food and accommodations.

“In Canada, the U.S. denial impacts citizens across our nation at a time when jobs, economic stimulus and competitiveness are critical for the country,” Girling continued. “This has been a shovel ready project in Canada since it was deemed to be in the public interest by the National Energy Board in March of 2010. Keystone XL would put 2,200 skilled Canadians to work almost overnight, with thousands more workers benefiting along the full value chain. Canadian manufacturers will lose out on millions more of spin-off activity that this US$8 billion privately-funded project would provide.”