Successful projects always have a strong leader at the head; someone who sees the end goal and has a clear vision on how to get there. A shining example of such a project is NiSource Inc.’s infrastructure modernization program with Chuck Shafer at the helm.

Shafer has been an integral part of the modernization program since its inception in 2007, but his growth at the company started long before that. 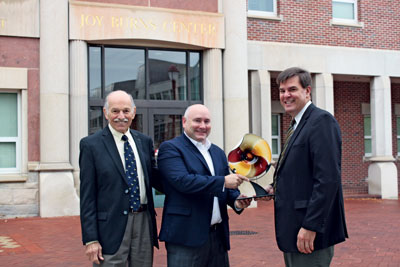 Shafer started at Columbia Gas 26 years ago as an intern, was hired after graduating from Ohio University and stayed with the company when NiSource acquired Columbia Energy Group in 2000.

In his unique journey through the company, Shafer worked in the field as an engineer supporting construction and maintenance, as well as in the office on both the customer service and marketing ends and some time at Columbia Pipeline Group, which NiSource recently spun off.

“Once I got into it, I definitely felt a draw and passion for the work,” Shafer says of his time as an intern for the company. “I’ve always enjoyed building and we’re building a critical infrastructure and maintaining it. There is a real sense of accomplishment being an asset-based corporation that provides a vital service to its customers.”

Shafer feels lucky to have had so many opportunities — many born from the merger of NiSource and Columbia — in his 26 years and the latest role is one he is most proud of: Overseeing the improvement and modernization of a natural gas system that serves approximately 3.5 million customers across seven states.

This program and Shafer’s leadership in terms of people, process and practice changes, is one of the reasons he is the inaugural Pipeline Leadership Award recipient. Shafer received the award at the Pipeline Leadership Conference organized by Continuum Advisory Group and Benjamin Media Inc. — publisher of North American Oil & Gas Pipelines — Nov. 4 at the University of Denver.

“We had many nominations for the Pipeline Leadership Award, but one candidate stood above the rest,” says Mark Bridgers, principal, Continuum Advisory Group. “Chuck Shafer and his team at NiSource really represent the ideal we set out to honor with this award by driving transformation and innovation in the pipeline industry through people, process and practice.”

According to Bridgers, what makes Shafer and NiSource leaders in the industry is the “rapid growth and current size of their program, the innovations they are applying in planning, design, procurement and construction. Particularly, the collaboration and integration with construction service partners … with emphasis on ‘partners.’”

Shafer passed credit for the award to his team.

“I’m proud to accept this award on behalf of the thousands of people who have worked so hard to make the program successful,” Shafer said when accepting the award. 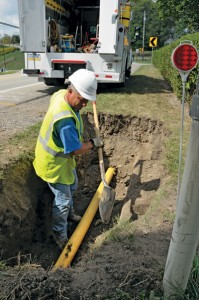 Since the start of the infrastructure modernization program, NiSource has reduced the amount of bare steel,
cast iron, in its system by 27 percent.

Long before the industry reached its current level of scrutiny both from regulators and the public — due in part to a series of pipeline failures in 2010 — NiSource was already actively involved in upgrading its gas distribution system. The company leaders realized that the pipelines were reaching the end of their design life and modernization was needed to maintain a safe and reliable system for NiSource customers.

“We took it upon ourselves to do this,” Shafer says. “San Bruno reaffirmed our direction and the acceptance and encouragement of modernization. We were fortunate that we had started that work.”

It was 2007, and NiSource began the discussion for the modernization program, which officially turned dirt for the first time in 2008. One of the things that make the program a success, Shafer notes, is a strong and consistent message from NiSource leadership that allows Shafer and his team and all of the partners to look at the long-term big picture.

NiSource invests approximately $1.4 billion a year on energy infrastructure improvements between its gas and electric customers. The overarching goal is to meet and improve upon the utility’s customer commitments for the next 100 years. During the 20-plus year modernization program, NiSource expects to spend $20 billion on its gas system. In 2006, the system had 40,471 miles of distribution pipeline and 334 miles of transmission class pipeline,
of which, 8,000 miles was bare steel, cast iron pipe.

The company tackled its highest risk facilities first and since the program’s inception, NiSource has been able to reduce its priority pipe (bare steel, cast iron) from comprising 21 percent of its system to 15 percent.

“Another driver of what we do is that we are creating and providing stability for our nation by providing a needed energy source,” Shafer says. “When you can drive around your community and point out the work that you have done, that’s really cool.”

Since the project’s inception, NiSource contractors have installed 8 million ft of pipe in a year. That equates to 35,000 to 40,000 ft a day, the bulk of which is the 2- to 4-in. pipe that runs from the meter to the edge of town.

“When you put in 8 million ft of pipe in a year, you will make an impression,” Shafer says. “You don’t have the luxury of anonymity. We have been committed to make a positive impression to our customers and communities.” 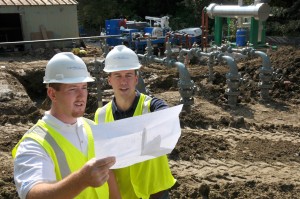 NiSource has about 3,000 workers involved in its system modernization program. Of those, two-thirds are contracted workers.

Shafer and his coworkers at NiSource are driven by the real sense of accomplishment that comes with building and maintaining infrastructure that is critical to this nation and delivering what customers need — whether its natural gas or electricity — in the way the customer wants it. This sense of accomplishment and pride in its work is also something NiSource looks for in its contractors and suppliers.

Prior to becoming vice president and general manager of field operations for Columbia Gas of Ohio, Jeff Winterstein, worked with Shafer for four years on the modernization program with oversight of capital projects in the six Columbia Gas states — Kentucky, Maryland, Massachusetts, Ohio, Pennsylvania and Virginia.

“Every day, Chuck and I worked on the overall program. I worked with Chuck as he built our engineering and construction organization so it could support the corporation’s capital investments and programs so we can replace and modernize our system,” Winterstein says. “A lot of our focus was our pipeline contractors. I worked with Chuck to form long-term relationships with our contractors so that it is more of a partnership, so we can sustain our programs long-term.”

Shafer is a champion of having an open and two-way line of communication with all of those involved in the modernization project. “We shared our long-term vision with our partners so they could prepare for this [multi-decade program],” Shafer says. “They can go out hire people, train them and buy equipment to do the work.”

This is something that is not lost on John Tully, senior regional manager of NPL, and Kevin Miller, president of Miller Pipeline Co. Both companies have played an important role in the infrastructure modernization program.

“Chuck was tasked with making sure that they had adequate resources available. He met with us and laid out a business plan that gave us the confidence to make investments in people and equipment required to tackle the work,” Miller says. “NiSource was more proactive than most others in securing resources and using partnering contracts to secure contractors to get the work done.”

Miller notes that other gas companies started modernization programs before NiSource, some of which are complete, but none compare to NiSource’s program in size and scope. Making sure the wide-reaching program stays on time and on budget requires NiSource to rely on partner contracts with contractors and suppliers. The partners share the same core values as NiSource and are essentially extensions of the company.

“It is a huge culture they are changing. That’s a big order to get people to change and think outside the box and Chuck is getting people to do that,” Tully says. “His true commitment is to the customer who is buying his gas. I commend him for that because he knows that once all of the construction is done, the only thing they [the customer] see is the gas meter hanging on the side of their house. Everything else we do is underground and everything needs to be back as good as, if not better than, how we started and Chuck insists on that from every one of his contractors.”

Making the modernization program a lasting success requires workers — Shafer estimates about 3,000 workers — to get the job done, two-thirds of which are contracted workers. Shafer, like the rest of the industry, realizes that the industry is facing a worker shortfall. That is why he is actively involved in a Distribution Contractors Association (DCA) initiative to evaluate the workforce problems facing the energy construction industry over the next decade.

“Everyone is in the same boat in the natural gas industry. We have a ton of work but few resources. We are all trying to figure out how to get the right people,” Tully says. “We’re working with Chuck on an initiative for better recruitment to figure out a solution to this industry problem.”

The DCA initiative is just now getting off the ground, but it’s one that Shafer is looking forward to being a part of especially since NiSource has multiple-decade’s worth of work in the pipeline. Making sure the workers are there requires leaders from the owner-operator side, contracting side and the education side to work together. All of this requires lifelong-learning and foresight, two things Shafer holds dear.

“I’ve never met a leader who I didn’t learn something from.” Shafer says. “The ones who I learned the most from painted a picture of where they were going and how we get there.”